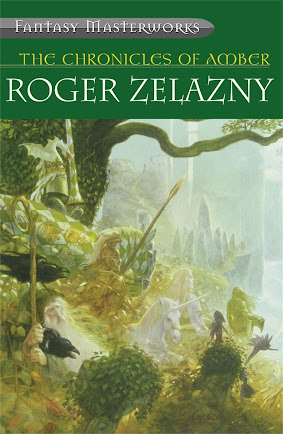 Colbert will executive produce the show with his Spartina production company. Skybound Entertainment and Vincent Newman Entertainment have been developing the project since 2016. At one point, Robert Kirkman (The Walking Dead) was in talks to join the project but those seemed to dry up.
There is no streamer or studio currently attached to the deal, although Colbert has a first-look deal with CBS, and Paramount+ is currently looking for new projects to help its aggressive growth plans.
The Amber sequence tells the story of the two "true worlds," Amber and Chaos, and the shadow worlds of parallel universes that lie between the two, including our Earth. The early books revolve around the adventures of Corwin, a Prince of Amber, whilst the later ones focus on his son Merlin, who is both a magician and a hacker.
The Chronicles of Amber has sold over 15 million copies since the first novel, Nine Princes in Amber, was published in 1970. Zelazny wrote ten novels in two five-book arcs for the series and was planning more at the time of his death in 1995. His estate later licensed another writer to publish a series of prequel novels, but these were received poorly by the fans.
The Amber saga is highly-rated by critics of science fiction and fantasy, and numbers George R.R. Martin amongst its fans. Martin saw Zelazny as a friend and something of a mentor after moving to the same town in the 1970s, but he will not be involved in this project due to his exclusivity contract with HBO (unless the show ends up at HBO, in which case I would assume GRRM would lend his expertise).
Posted by Adam Whitehead at 20:23

Finally! This makes me ver happy.

Fantastic news!
Given the low page count of the books,I suspect we will see a fair bit of Corwin's life on our Earth as a guy with abilities who doesn't remember Amber

Christian Bale would make a perfect Corwin (since he’s a great actor and can change his weight easily for the part where Corwin’s imprisoned). Also, he can change accents easily if need be, so that helps as well.