The number of games set during the Second World War borders on the ridiculous. The number of titles which attempt (usually badly) to recreate D-Day or Operation Market Garden is vast, but the overwhelming majority of them fail to capture either the atmosphere or historical feel of the conflict. First-person shooters like the Call of Duty franchise have proven a lot more successful at depicting the conflict than strategy games, with most WWII strategy games being quite boring (such as the Sudden Strike series, which is so anal your soldiers can actually run out of bullets, which is taking pedantry to a new level). 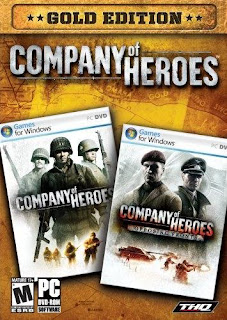 For these reasons, when Company of Heroes was first announced there wasn't a huge amount of excitement about it, especially as the developers, Relic, were responsible for the entertaining-but-lightweight Dawn of War series. When it came out, however, it was an absolute revelation, doing for WWII strategy games what Medal of Honour did for WWII shooters a decade earlier.

Company of Heroes is set purely on the Western Front of the European theatre of WWII, starting on D-Day and proceeding through to the end of Operation Market Garden. The initial game features a single campaign focusing on the US forces and depicts the assault on the beaches, the behind-the-lines movements of special forces which silenced the German's artillery pounding the beaches, the assault on Cherbourg and the battles of St. Lo and Falaise that resulted in the final defeat of German forces on the Cotentin Peninsula. The expansion, Opposing Fronts (which is included with the CoH Gold Edition), features two campaigns. The first centres on the German Panzer Elite as they race to defeat the Allies' assault on Arnhem in Operation Market Garden, and the second (set some months earlier) focuses on the British assault on Caen, a gruelling battle that was supposed to be won in a single day but instead lasted more than a month due to the unexpected presence of elite SS forces in the town. A notable lack in the game is that the fourth side, the 'normal' German Wehrmacht, lacks a single-player campaign, but Relic have surprisingly noticed this and decided to remedy this with a downloadable German campaign, to be released in early 2009, although it will use different mechanics to the rest of the game.

The game is notable for minimising base-building, although it doesn't eliminate it as the Ground Control series did some years earlier. However, resource-gathering has been eliminated in favour of holding territory on the map. This mechanic encourages aggressive play from the start, as he who seizes the most territory in the shortest possible time will find the balance of power swinging in their favour. This leads to an interesting trade-off as players must decide to reinforce earlier in the game with lots of low-level units such as jeeps, mortars and machine gun teams, or instead holding off until more advanced technology such as artillery and tanks becomes available. The variation in these mechanics is what makes the game interesting to play, particularly in the compelling multiplayer modes.

On the single-player front, the game is unfortunately rather cliched. Some of the maps are excellently designed, but the stories are rather traditional WWII stuff featuring good old American boys and stiff-upper-lipped British soldiers facing off against the ruthless-but-with-a-sense-of-honour Germans (as usual for a game, the actual Nazis play no role in events). The storytelling is also weak, as it happens entirely within the cut scenes between missions. The actual characters do not appear in the missions and no storytelling takes place during the missions themselves, which means that after spending an hour on a tough map you've forgotten what is going on in the story, and don't particularly care about what is happening to these cliched characters.

The American and Wehrmacht forces are excellently-designed and balanced against one another, although the higher-level German units (particularly their tanks) are tough to stop once they get rolling. The game engine delivers the chaos of battle particularly well, with massive artillery bombardments, air strikes and ferocious tank duels giving us some of the most convincing WWII action in a game seen to date. However, the newer sides of the British and Panzer Elite are less interesting and, although well-balanced against one another (the British focus on static defence whilst the Panzer Elite are focused on attack) feel a bit off when fighting the established sides. In particular, the American and German ability to lock down and defend territory markers whilst the Brits and Panzer Elite cannot is rather unbalancing.

Where Company of Heroes comes to life is the excellent multiplayer which, after two years, seems to have finally gotten some stable and reliable servers. Cracking a particularly tough co-op skirmish or fighting a challenging battle with human players is tremendously satisfying, and the varied tactics and relatively fast pace of the game make Company of Heroes the most satisfying multiplayer RTS game since the venerable StarCraft.

Company of Heroes (*****) is a compelling and fun game where the single-player experience suffers slightly but the multiplayer and skirmish games more than make up for it. The game is available now in the UK and USA in a 'gold edition' with its expansion, Opposing Fronts, included. A second expansion, Tales of Valour, will be released in the spring of 2009 and Relic are considering a sequel, possibly adding the Russians or being set in North Africa.
Posted by Adam Whitehead at 00:31