Knife of Dreams by Robert Jordan

After the disappointing and critically-mauled Crossroads of Twilight, Robert Jordan seemed to have a serious rethink about his Wheel of Time series was progressing. He stopped writing the series - taking a six-month break to write the extended version of the prequel novel New Spring instead - and when he came back to it he seemed to have recaptured some of his old fire. The resulting eleventh and then-promised-to-be-penultimate book in the series, Knife of Dreams, is a definite step up from the preceding three or four books, although some of the series' latter problems continue to be an issue. 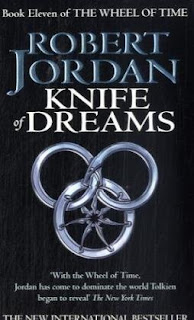 The Last Battle is drawing near. The fabric of reality itself is breaking down as the seals on the Dark One's prison begin to fail. The dead are reappearing, long-lost towns and cities are flashing in and out of existence and the One Power itself seems to becoming unreliable. Yet Rand al'Thor's task of unifying the Westlands against the Shadow is far from complete. The Seanchan invasion force, now massively reinforced, is continuing to absorb more territory in the south-west of the continent. Whilst Rand's forces are large enough to destroy them, it would only be at a terrible cost in blood. With little choice, Rand extends an olive branch to the Seanchan whilst a Domani general launches a massively ambitious gambit to throw back the Seanchan armies encroaching on his kingdom.

Meanwhile, Perrin has made the fateful decision to ally with a Seanchan general to destroy the Shaido Aiel encamped at Malden who hold his wife Faile prisoner. Inside the camp, Faile is making her own escape plans but is relying on some very dubious partners to pull it off. Elsewhere, Mat Cauthon's flight from Ebou Dar with the kidnapped Daughter of the Nine Moons runs into difficulties when he encounters a huge Seanchan army blocking the way into Murandy, and Egwene al'Vere has been captured by the Tower Aes Sedai, whose plans to break her are foiled at every turn. In besieged Caemlyn Elayne Trakand makes one last throw of the dice to win the Lion Throne of Andor, and the Ogier teeter on the brink of a fateful decision that may have ramifications for the Last Battle.

Knife of Dreams is a much busier, far better-paced book than the ones preceding it. Several major storylines in the overall Wheel of Time series, some of them extending back seven or more volumes, are brought to final conclusions, and long-dangling minor plot threads are finally picked up on and expanded. We also get some tantalising clues as to the origins of the Ogier (one of the least of the series' mysteries, but welcome nevertheless) and, at long last, some major combat scenes. Rand, Mat and Perrin each have a major battle to fight and Elayne also has some skirmishing to do to win the throne of Andor. However, the storyline that possibly most impresses is Egwene's captivity in the White Tower. Jordan deftly avoids falling into the trap of making this a contrived story, and Egwene's quiet method of defiance against her captors is genuinely interesting. Also, the fact he packs virtually the whole story into one chapter is a plus as well. 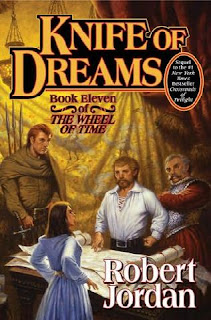 (Not Darrell K. Sweet's finest hour)
However, Knife of Dreams is plagued by some of the same troubles as earlier books in the series. An absolutely vast number of minor characters whose import to the series is questionable continues to expand, and the minutiae of Elayne's pregnancy and arguments between different groups of channellers continues to weigh the series down. About halfway through the book, however, these problematic elements recede and the focus on resolution and conflict becomes more apparent, making the second half of the novel far more enjoyable to read, almost as much as the series at its best.

Reaching the end of Knife of Dreams, it is abundantly clear that there is no way that the series could be resolved in just one more book, and the recent confirmation by Brandon Sanderson that A Memory of Light will almost certainly be two volumes strangely comes as something of a relief: after such a huge journey, wrapping everything up in as short a space as possible for the sheer sake of it would have been dissatisfying.

Knife of Dreams (***½) was the best Wheel of Time novel in a decade when it was published and although the series' flaws were not eliminated by it, Robert Jordan's decision to acknowledge the weaknesses of the previous volume and move to counter them was effective. It certainly leaves the reader anxious to leap into the next book as soon as possible, and hopefully less than a year from now that will be possible. The book is available from Orbit in the UK and, with quite possibly one of the worst fantasy covers in history, from Tor in the USA.
Posted by Adam Whitehead at 17:10

Email ThisBlogThis!Share to TwitterShare to FacebookShare to Pinterest
Labels: knife of dreams, robert jordan, the wheel of time