Joe Ledger is an all-American hero. Impossibly square-jawed, he is an expert at both unarmed and armed combat, yet is sensitive to the emotional needs of his friends. He also has a cat. In what might be Patient Zero's most accomplished twist, he isn't ex-Special Forces, but merely has a few years in the army and the police force behind him. No, his awesomeness is purely innate. As someone says in the book, you can't train that kind of badassery. If this book had been written twenty years ago, he'd have been played by Steven Seagal in the movie version.

Ledger, being a one-man army, natural leader and patriot, is naturally recruited into the DMS, the Department of Military Services, an ultra-secret organisation created by the US government to combat terrorist threats on levels that go way beyond anything that gets out to the public. Answerable only to the President, the DMS has resources and budgets that even the CIA and FBI can barely dream of. And, for reasons never adequately explained, an attractive British female officer who is ex-SAS and has a stiff upper lip. Now, the DMS is facing a new threat: a group of Middle-Eastern terrorist groups have joined forces with an international pharmaceutical company to unleash a virus upon the United States, a virus that turns everyone it touches...into zombies. 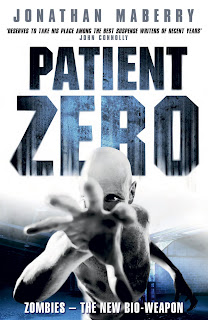 At this point you may be wondering if Patient Zero is a black comedy, or an expertly-written piece of satire. The improbably chiselled hero, the zombies, and their creator (a beautiful-but-deadly female jihadist) all indicate this book is going for laughs, but the often gruesome violence and the dwelling on the psychological damage being done to the DMS team by the horrific situations they find themselves in suggest otherwise. I think Maberry decided to do a traditional action story but mixed in counter-terrorism with the walking dead and then played the whole thing straight.

Like many books with an absurd (but high-concept and possibly Hollywood-baiting) premise, it nevertheless strangely works as long as the author doesn't dwell on the sillier aspects of the story. Maberry is an accomplished writer of horror and is a winner of the Bram Stoker Award, and whilst this is first and foremost an action story, the horror elements are described very well. He has an expert way with pacing and the story is quite a page-turner. The structure is also interesting, with the book moving back and forth in time to show the build-up to the current crisis as well as its resolution. The book also mixes its perspectives, with Joe's chapters relayed in first-person but several other characters described in a standard third-person narrative. This works reasonably well. Finally, there's an interesting if predictable twist when it is revealed that there are really three factions at work here, all with their own agendas, which complicates the end of the book nicely and sets things up for the two sequels. Whilst Patient Zero is a stand-alone novel, Joe Ledger will return in Dragon Factory and The King of Plagues.

Patient Zero (***½) is an accomplished thriller which overcomes its dafter aspects to become an enjoyable novel. However, every time you really start to get lost in the story, a scene or line of staggering corniness smacks you over the head with as much subtlety as a brick. Whilst some may find this off-putting, it does help contribute to the feeling that this is basically the literary equivalent of a cheesy-but-enjoyable action movie. You'll probably have completely forgotten about it in a few months, but you'll have fun along the way. Patient Zero will be published in the UK by Gollancz on 16 April 2009 in hardcover and tradeback, and in the USA by St. Martin's Press on 3 March 2009. The author has a website at this location.
Posted by Adam Whitehead at 17:05

Adam - great review, Jonathan Maberry defintely writes a good story, and he clearly has fun while doing so.

For a sneak preview, chapter#1 and a free downloadable story are both available from the publisher: www.stmartins.com/patientzero

Thanks for the terrific review. It's much appreciated. I had a tremendous amount of fun with that book.

Thanks for the recommendation on Patient Zero by Jonathan Maberry. So far this is the best book I've read this year, definitely the best zombie book I've read in ten years, and the best-written thriller I've read for many years.