Crossroads of Twilight by Robert Jordan

Wherever epic fantasy writers ply their trade, scribbling scenes of magical convergence or enormous battles between steel-clad knights, there are whispers of a dire warning: "Remember Crossroads of Twilight." This is a book that has gained a certain infamy in fantasy circles, which even the most ardent Wheel of Time fans are hard-pressed to defend, and serves as an object lesson to every writer of a long, complex series of what can happen if the writing discipline slacks and they lose control of the narrative. 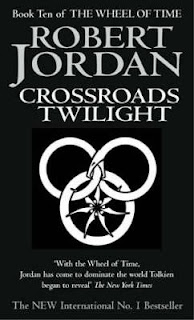 Winter's Heart ended with a number of storylines in progress and Crossroads of Twilight picks up on them. Briefly, Mat Cauthon has escaped from Ebou Dar but has inadvertently wound up with Tuon, the Daughter of the Nine Moons, as his prisoner. Perrin's wife Faile is a prisoner of the Shaido Aiel and Perrin and a band of reluctant allies attempt to locate her. The renegade Aes Sedai have Travelled to Tar Valon and besieged the city, but Egwene's reluctance to unleash bloodshed results in a morale-sapping stalemate. Elayne's attempts to secure the Lion Throne continue. Rand al'Thor recovers from the exhaustion caused by the Cleansing of saidin. And that's about it. The only major new storyline is General Rodel Ituralde of Arad Doman organising an offensive against the Seanchan, which is intriguing and is naturally only featured for a few pages and then not mentioned again.

Crossroads of Twilight's structure is not very well thought-out. Jordan's intent was to provide a catch-up following each band of characters from where we last saw them in Winter's Heart to the moment of the Cleansing, a major world-shifting event and arguably the biggest moment in the series to date. And if he had done this say in the first 100 pages, or in the prologue, this would have been a good idea as people's misunderstanding of what that event signifies goes on to play a major role in events in the series. The problem is that he takes far too long to pull this off. We only start moving on beyond the Cleansing in the last 50-100 pages or so of the book, and aside from a mildly startling cliffhanger ending to Egwene's storyline, there is no real climax to the book. It just judders to a rather unsatisfying halt. And the great irony is that the Cleansing itself is largely proven irrelevant: most people, when told what it was, flat-out refuse to believe it, making the whole book feel like an exercise in futility. 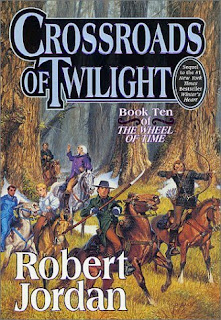 So, we have a 700-page novel in which not much happens. Everyone's storyline crawls forward at an insanely slow pace, with entire chapters featuring little beyond descriptions of forests or characters discussing what has happened earlier in the plot for no discernible reason. There are good moments buried amidst the dross, such as Perrin realising the limits of his morality, the true nature of Shaidar Haran being revealed or Egwene's intelligent plan to resolve the siege of Tar Valon, but getting to them is like wading through treacle. There is no momentum to the story, especially as every couple of chapters we rewind to a point before the Cleansing, move a few days forward, and then rewind again with a different bunch of characters. The bulk of the book takes place only across a few days (whilst The Great Hunt, for example, covered about six months) and progress is torturous.

Crossroads of Twilight (*½) is by quite some margin the weakest book in the series and one of the most disappointing fantasy novels ever published, considering how good some of the earlier books were. The few decent moments are drowned amidst literally hundreds of pages of empty, pointless prose and padded minutiae. The book is published by Orbit in the UK and Tor in the USA.

I am taking a brief break from the Wheel of Time series to read Scott Bakker's new book, The Judging Eye, the continuation of his epic Second Apocalypse saga which began with The Prince of Nothing trilogy. I hope to get that review up by the end of the week so I can get back to Knife of Dreams which, fortunately, is a substantial improvement on the preceding few books in the Wheel of Time series.
Posted by Adam Whitehead at 18:34

Email ThisBlogThis!Share to TwitterShare to FacebookShare to Pinterest
Labels: crossroads of twilight, robert jordan, the wheel of time

I loved it, and can't wait till the next book comes out in the fall :)