The Aspect-Emperor: Ansurimbor Kellhus, proclaimed by the Inrithi faithful as a living god, who sees the truth written in men's hearts, who wields powers of sorcery beyond those of any other mortal, who was hung on the Circumfix and returned to life once more, and who has revealed to the world a terrible truth: that the evil and vile Consult have endured for two thousand years since the First Apocalypse, and now work to bring about the Second. 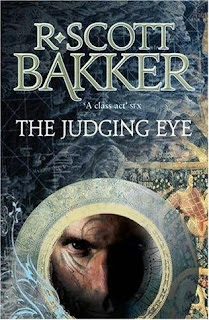 Twenty years ago, Kellhus seized control of the Holy War against the heathen Fanim and led it to victory at the walls of the holy city of Shimeh. But at his moment of triumph, he was denied to his face by his own teacher, Drusas Achamian, who forsook his school and love and disappeared into the wilderness. Since then, the Aspect-Emperor has worked to unite the Three Seas against the Consult and prepare for the Great Ordeal, the march of the faithful against distant Golgotterath, to tear down the fortress and destroy the Ark of the Heavens before the Consult and their Inchoroi masters can resurrect the No-God and bring about the sealing of the world. Now the man who was once proclaimed the prince of nothing leads a vast host into the Istyuli Plains on the first leg of the epic journey into the Ancient North.

Back home in the capital of Momemn, the Empress Esmenet rules the Empire in her husband's absence, but most of her children are cold and distant, leaving only her twin sons Kelmomas and Samarmas capable of loving her, but Kelmomas harbours his own ambitions and secrets, whilst a popular and widespread sect is beginning to doubt the right of Kellhus' rule. Elsewhere, Drusas Achamian's self-imposed exile is rudely broken by a surprising arrival, encouraging him to set out on a quest he long ago vowed to take. Achamian knows the truth of Kellhus, revealed to him by the warlord Cniaur: that the Aspect-Emperor is no god made flesh, but a man trained to manipulate others and see their desires in their faces, the scion of an ancient and mysterious sect: the Dunyain. Achamian now knows he must find the Dunyain and their ancient fortress, lost somewhere in the wilderness of the Ancient North...

The Judging Eye is the fourth book in R. Scott Bakker's Second Apocalypse series, and the first in The Aspect-Emperor Trilogy, the middle sequence of books making up this huge sequence. Picking up the action a generation on from The Thousandfold Thought, we learn that the world of Earwa has seen many changes since the victory of the Holy War, and that most of the civilised world is now united against the Consult and the return of the No-God. At first this appears to be a good thing, since Earwa's own personal dark lord isn't even up and breathing again yet, whilst his enemies are already on their way to destroy his followers and his dark tower (albeit the dark tower actually appears to be a crashed biotech alien starship, but same principal). But can things really be that simple? Whilst The Judging Eye is merely the opening salvo in this new saga, it laces hints into the narrative that things are about to take a turn for the apocalyptic, and given that Bakker has already said that in scope and resonance The Aspect-Emperor is to The Prince of Nothing what The Lord of the Rings is to The Hobbit, we can assume numerous complications are to come.

The Judging Eye follows three main storylines: the Great Ordeal as it marches into the North, Achamian's journey into the wilderness with a bunch of semi-mercenaries known as the Skin Eaters, and events back in Momemn. A strictly regimented chapter system sees us delivered between these POVs with ruthless efficiency, each chapter detailed to bringing some revelation or character point to light. As a result, The Judging Eye is on the slim side for a huge epic fantasy series (not even 450 pages long) but is packed with incident and moves at a fast pace. Bakker holds back somewhat on the philosophical digressions compared to the earlier trilogy, possibly having gotten a lot of his musings out of his system with his recent SF stand-alone Neuropath, although this is by some margin still the most intellectually-stimulating epic fantasy book since, well, The Thousandfold Thought. That's not to say that those who only read epic fantasy to see people get blown up with magic will be disappointed, but certainly there's a hell of a lot of stuff going on here in subtext that will likely only become fully apparent on re-reads once later books in the series have been released. One thing that is notable is that The Judging Eye is notably more fantastical than the prior series, which held back on the non-human species and (until the end) the truly massive sorcerous conflagrations. The Judging Eye has no such compunctions, and those wishing to know more about the magic of Earwa and various oft-mentioned races will find much to enjoy here. 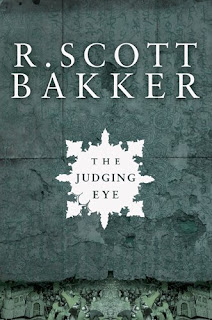 As a continuation of The Prince of Nothing, The Judging Eye works superbly, although newer readers I think may be left a bit nonplussed by events (and the 'what came before' section is notably light on events from The Prince of Nothing that don't directly impact on this book's storyline). I think everyone who enjoyed the earlier trilogy will be more than satisfied with this offering as well. Those who weren't so keen may not find enough has changed to convince them otherwise, and most notably the biggest weakness in the series remains: that whilst it is imaginative, powerfully-written and at times intense, it is also a somewhat remote and cold work, easy to admire, hard to love. But it is fascinating, and the mystery of what the Consult is actually trying to achieve and what the No-God actually is (despite my glib comment earlier, he/it certainly isn't Sauron Mk. 2) remains deeply compelling.

Another possible issue with The Judging Eye is that it really is the opening of a bigger story, and isn't even as much of a stand-alone as The Darkness That Came Before. There is no climax to the Great Ordeal or Momemn storylines (both of which just stop), but this can be forgiven for how Achamian's story climaxes. I know Scott is paranoid about spoilers, so let's just say that he pays an exceptionally impressive tribute to JRR Tolkien which is clearly a homage and not a rip-off, and ends in a moment of gut-wrenching terror that is almost palpable and will no doubt cause much discussion on numerous fantasy forums for the next few months.

The Judging Eye (****½) has already staked out its claim as the most impressive fantasy novel of 2009. With some very big guns indeed coming out in the next year, it will be interesting to see if it can hold that position, but for now I can say that this book marks a triumphant return for the most philosophical and literate epic fantasy writer around at the moment. The book will be published on 20 January 2009 in the UK, USA and Canada, from Orbit, Overlook and Penguin respectively.

Email ThisBlogThis!Share to TwitterShare to FacebookShare to Pinterest
Labels: r. scott bakker, the aspect-emperor, the judging eye, the prince of nothing

Ok, I have one question that needs answering (minor, minor, minor spoiler):

Does Achamanian seriously lead off a letter denouncing the Aspect-Emperor by saying he boinked the Empress?

Or is that just what the letter writer paid the most attention to?

If I remember rightly, the writer of the letter has found a copy of the journal Achamian was writing during and after PoN, and focused on that point. Akka didn't literally write a letter pointing out that he'd slept with Esmenet because that would be a bit pointless.

It would take balls of granite and a delightfully perverse sense of humor to do so.

I thought that was one of Bakker's most inspired "throwaway" moments I've seen yet.

Can't wait for this one.

Hey Adam, great review. Hope you don't mind that I posted a link to it on my blog.