The Path of Daggers by Robert Jordan

The Path of Daggers was originally published in October 1998 and was released two and a half years after the previous volume (which had ended on a cliffhanger), the longest gap between books in the series at that time. As a result, expectations for this book were high. When the book finally arrived, people were taken aback by its slimness (at least compared to other books in the series) and its failure to address that cliffhanger from the prior volume. Reviews of the book were negative and even today some fans continue to cite this as the weakest book in the series (although the majority agree that that honour goes to the tenth book). For a series that had almost been immune to criticism up to this point, this book marked a serious turning point for the worse. 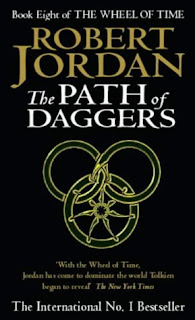 The book opens in the aftermath of events in A Crown of Swords. Rand al'Thor, the Dragon Reborn, has been proclaimed King of Illian after killing the Forsaken Sammael. His satisfaction is short-lived, however. The Seanchan have returned in great force and in a blitzkrieg campaign lasting several weeks have swept through the south-west of the continent, conquering the kingdom of Tarabon and capturing the cities of Amador and Ebou Dar (the capitals of Amadicia and Altara, respectively) in rapid succession. Already fearing they might march on Illian next, Rand concocts a plan to bottle them up in Ebou Dar, but is unaware that there are those in his own ranks who are preparing to move against him.

Meanwhile, in Ghealdan Perrin makes contact with Queen Alliandre as part of his mission to track down and neutralise the increasingly insane and dangerous 'Prophet of the Dragon', Masema. At the same time, the leaders of the Borderlands have led a vast host southwards for an unknown reason. Nynaeve, Elayne and their loose and fractious alliance of Sea Folk Windfinders, Aes Sedai and Kin have recovered the Bowl of Winds from Ebou Dar and now have to use it to restore normal weather to the world, unaware of the consequences of their actions. And in the White Tower Elaida walks a fine line as she is blackmailed by Alviarin into doing things that will shatter the sisterhood, whilst her secret agents continue their hunt for the Black Ajah.

A plot summary of Path of Daggers sounds exciting, and the news that the book features a significant military showdown between Rand and the Seanchan should be impressive. However, The Path of Daggers is beset by numerous problems that prevent it from being fully enjoyable. First off, the level of filler in this book is much worse than any previous volume. There are several chapters where characters are riding along arguing with one another, or discussing the plot, or making it clear how much they hate one another. These points are slammed home again and again by Robert Jordan for no clear purpose. The battles between Rand and the Seanchan are intriguing and the messy ending to the engagement is an important moment in the series, but it comes far too late in the book. Perrin's story proceeds at an absolute crawl and he barely has any screen-time in the book, whilst Mat has none. Jordan's point that Mat is recovering from his wounds and thus isn't doing anything interesting in the story at this moment is well-taken, but at the same time the ambiguity of Mat's fate in the prior volume was part of what made the book's ending powerful and interesting. It being completely ignored for four and a half years until Book 9 was annoying. However, re-reading the series now this isn't so much of a problem. 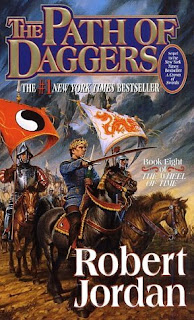 Up until The Path of Daggers, the structural and writing problems with the series could to some extent be ignored because the story was still compelling and the reader was encouraged to read on no matter what. However, at this point and through the next two books these problems start to actually interfere with the readability of the books. The pace slows to a crawl and events that would have been covered in a few chapters in previous books now span entire novels. For some reason Jordan ignored the basic writing maxim that as you build up to a series finale you have to increase the pace and intensity of events, and as a result the series becomes somewhat more difficult to read in-depth from this point on.

The Path of Daggers (**½) doesn't suffer from quite so many problems as it did on first release, but it still represents a significant failure in both writing and editing that makes it a shadow of the book it could have been. The book is available in the UK from Orbit and in the USA from Tor.
Posted by Adam Whitehead at 17:28

Email ThisBlogThis!Share to TwitterShare to FacebookShare to Pinterest
Labels: robert jordan, the path of daggers, the wheel of time

t wait till you finish Winters Heart and Crossroads of Twilight.

I never thought I would get so damn bored.