Terry Pratchett had been talking about a book called Nation he'd really wanted to write for almost half a decade when he was diagnosed with early-onset Alzheimer's. According to rumour, he'd already begun working on the next Tiffany Aching Discworld novel, I Shall Wear Midnight, but upon hearing the news he dropped it immediately to make sure Nation was written first. 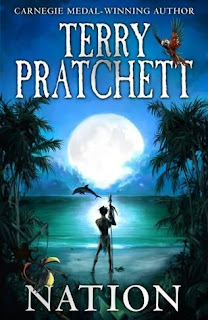 Nation is not a Discworld novel, but is instead set in an alternate history very similar to our own late 19th Century when the British Empire was at its height. A tidal wave sweeps across the Great Southern Pelargic Ocean (the South Pacific) and wipes out the tribal civilisation of the Mothering Sunday Islands. In particular, the island simply known as the Nation is totally destroyed, apart from a single young man named Mau. Mau finds himself alone on his island, until he discovers the crashed remains of a foreign ship and a pale-skinned young woman who initially tries to kill him, but later invites him to tea. Soon refugees from the crisis gather on the island, and Mau realises he has the choice to rebuild the old world, or choose to do something new with his nation...

Nation is Pratchett's most serious book since his 1992 classic, Small Gods. In fact, it shares some similarities with that book and acts as another treatise on faith, religion, atheism and morality. It is slower and more thoughtful than that earlier novel, where a younger and more angry Pratchett was in full-on fiery condemnation of blind fundamentalism, but works well due to those contrasts. It isn't as funny as a typical Pratchett book, although there are a few chuckles to be found here and there, particularly what appears to be a clever inverting of one of the premises of the TV show Lost in the final chapter and epilogue. However, it is also a more spiritual book, which is interesting given Pratchett gives New Age ideas pretty short shrift in his other books. But here things happen that can't be easily explained away by science, and it's debatable whether this is Pratchett perhaps considering things in a different light or simply a facet of this world which is different to our own (and is quite reminiscent of the gods in Discworld who exist purely because people believe in them, not the other way around). 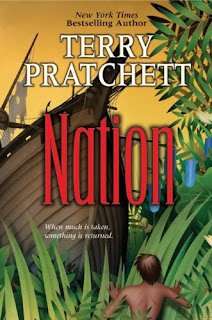 Nation is being marketed as a YA novel, but it really isn't. It's depiction of tragedy and death in the opening chapters is pretty unflinching, and occasional moments of blood and cruelty abound throughout its length. Also, the central themes are pretty weighty and not something I see young children really getting into. However, for the adult reader Nation is an interesting and thought-provoking read which raises many interesting ideas and questions, whilst remaining entertaining and well-characterised.

Nation (****) is available in the UK from Doubleday and, with a spectacularly awful cover, in the USA from HaperCollins.
Posted by Adam Whitehead at 11:57

To me, this was his most emotionally affecting book since Night Watch.

I love the Discworld, but he doesn't often write as if he were profoundly moved by what he has to say.

As soon as I read "Marketed as YA, but really isn't" I literally jumped out the door and bought it.

Yeah I loved it, a very emotional book especially when you consider why he suddenly decided to complete it.

I could even say this is my favourite piece of Pratchett's work, Discworld or not ... a splendid reading experience.