Takeshi Kovacs, an ex-Envoy now working for his own agenda, has returned to his homeworld of Harlan's World on a personal mission of vengeance. During his task he falls in with a gang of freelance mercs assigned to cleaning out the continent of New Hokkaida, where intelligent robots left behind from an old war are still making the land too unsafe for re-colonisation. A chain of events is set in motion that will transform the face of Harlan's World and bring Kovacs face-to-face with his own past in a very literal way. 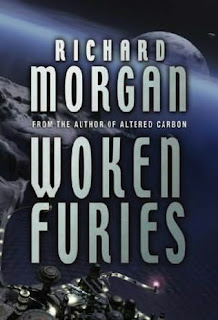 Woken Furies is the third and, to date, final book featuring Morgan's protagonist Takeshi Kovacs. This time Kovacs is out for blood on his own terms when he is swept up in a very different and fuzzy chain of events which focuses on his own past. If Altered Carbon was a detective story and Broken Angels was a war story, Woken Furies is more of a political story and offers more of a glimpse into Kovacs' mindset, brought into sharp relief as he encounters old friends and enemies on his home planet. These events also allow Morgan to explore some more of the consequences of his body-swapping, re-sleeving universe, with subtle nods towards its implications for consciousness, sentience and what it precisely means to be human (a slight and barely perceptible nudge compared to Bakker's Neuropath, which yelled it into the reader's face loudly until we got it).

As usual, this is an ultra-violent, bloody, sexually explicit and generally pretty hardcore story of revenge, rebellion and fear, with some exploding robots, surfing and extreme rock-climbing thrown into the mix. Those who've followed Kovacs' adventures before will be at home here, although given that the events of the first two books do impact on the story here I would advise newcomers to start with Altered Carbon first. 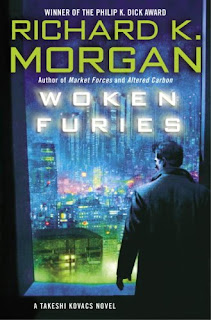 Woken Furies (****½) is the last Kovacs novel for the time being, although Morgan has not entirely ruled out a return to him later on. The book is available from Gollancz in the UK and from Del Rey in the USA. Morgan's latest novel, The Steel Remains, is out now in the UK and in February in the USA.
Posted by Adam Whitehead at 18:25

Do you plan to read and review Market Forces as well?

At some point, yes. Not sure when I'll get to it though.

Market Forces just might be rather appropriate at this moment what with the global meltdown and all...