Dawnthief is the first book in both the Chronicles of the Raven trilogy and the longer seven-volume Raven sequence featuring a band of mercenaries striving to save the 'continent' of Balaia (it's actually about the size of France, from what I can tell) from various threats. It was originally published in 1999 and launched the career of British fantasy author James Barclay, whose most recent work was the Ascendents of Estorea duology (Cry of the Newborn and Shout for the Dead). 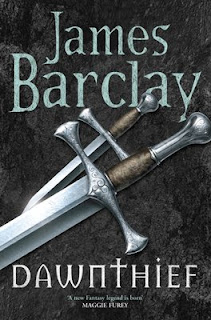 The Raven are a band of mercenaries bound together by ties of honour and friendship. During the defence of a beleaguered castle, one of their number is accidentally killed due to the machinations of a wizard named Denser. The Raven don't take too kindly to this, but learn that Denser is on a mission to save the curiously rectangular landmass of Balaia from the return of the evil Wytch Lords, who are being resurrected by the evil Wesmen to spread fear and, erm, evil across the lands of eastern Balaia. The Raven thus join forces with the redoubtable Denser to collect together the pieces of a badass spell called Dawnthief which will defeat the Wytch Lords but could possibly blow up the entire world at the same time.

Dawnthief is not a very successful novel (artistically, although it's been a solid seller, hence the six sequels). From the start it was a tough read, not because of dense prose but because the story was so bland I had a hard time staying focused on it. The characters are all pretty shallow and tend to blur into one another, making following them and their adventures difficult. The prose is workmanlike and the story is told via massive info-dumps with the odd action sequence to break them up in a very mechanical fashion. The writing actually reminded me of David Eddings, except unlike Eddings there are bursts of graphic sex, rape and violence that mean I cannot recommend the book to a YA audience. There is very little in the way of worldbuilding, and no real sense that an exterior world exists beyond the bubble our characters are travelling in. There are nonhuman races such as elves, but aside from having better eyesight there is nothing to distinguish them from the humans. Barclay does kill off some major characters in a possible attempt to make things more interesting and exciting, but then they tend to come back again, which makes the effort rather pointless. There is also little to no tension, as you never doubt for a microsecond that the Raven will fail.

I know from reading Barclay's more recent duology that he does get a lot better as his books continue, but I'm not sure I want to read another six books just to find out when that happens. Still, I may give the second volume, Noonshade, a go at some point in the future.

Dawnthief (*½) is available now in a new paperback edition from Gollancz in the UK. Pyr will start publishing the series in the USA in late 2009. The seventh Raven novel, Ravensoul, has just been published in trade paperback in the UK.
Posted by Adam Whitehead at 20:44

I thought Dawnthief was ok, nothing special. I have to say though, that Noonshade is definitely an improvement.

I bounced hard off this. It was so obviously based on a D&D campaign, it was very very hard to get through.

I bought Nightchild the other day thinking it was the first book. Oops.

You can find an article about James Barclay's next trilogy here :