Christopher Nolan's Batman Begins was an interesting take on an established character and franchise. Batman has always been one of the most morally complex 'superheroes' out there and Nolan used his movie to explore the psyche of Bruce Wayne in a manner that Tim Burton's earlier movies barely touched on. However, it was let down by a relatively unimpressive pair of villains, a weak ending and far too much stuff being shoehorned into the plot, resulting in bloat. For all of that, it was still an impressive film. 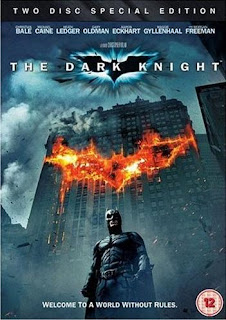 The first film ended with the establishing of the alliance between Lt. Jim Gordon of the Gotham City police department and Batman, and the beginning of a crime spree by a shadowy figure known as the Joker. The second movie picks up a few weeks or months later, with the Joker rapidly becoming public enemy number one and Batman's attempts to locate and defeat him being unsuccessful, especially as his crimefighting crusade is becoming complicated by the emergence of ham-fisted copy-cat vigilantes. However, a new district attorney, Harvey Dent, has made it his business to bring down Gotham's criminals and after a series of major successes against important gangs and crime bosses, Bruce Wayne begins to let himself think that maybe he won't have to be Batman forever.

Of course, this is only the beginning of the story. Batman, Dent and Gordon form an unofficial alliance to bring down and defeat the criminals of the city, but the Joker reacts by forming his own alliance of the various criminal elements against them. The result is an escalating series of complex, doublecrossing traps and counter-traps by both sides. The stakes are raised, lives are lost, and Gotham is brought into utter chaos as a result. And two men's souls and morals are caught in the balance.

The Dark Knight is a fiendishly clever film which works on a thematic level that superhero movies have rarely operated at before. For this reason, the movie has already been hailed as the most important superhero movie to date, elevating the genre to a new level of credibility (possibly having the same effect on the genre that 2001 had on science fiction or Lord of the Rings on fantasy films). It's hard to argue entirely against this: The Dark Knight is a movie of impressive ambitions, but whilst from an artistic perspective it may indeed be worthy of the hype bestowed upon it, its role as entertainment accordingly suffers in several key areas.

Much has been made of the late Heath Ledger's remarkable performance as the Joker. Taking on a role that Jack Nicholson had made memorable in Tim Burton's 1989 Batman movie was a challenge, but one that Ledger rose to by simply making his Joker an insane agent of chaos, an enigma, rather than a loud clown with a detailed (if unoriginal) backstory. The Joker gets no backplot here, nothing to make him sympathetic on a human level. He is a psychopath and a monster, one that Ledger portrays with brilliant intensity and some excellent comedic timing. However, his role in the film appears misleading. The heart of The Dark Knight is the war for the soul of Harvey Dent, and in that story the Joker is a catalyst. The Joker's significant amounts of screentime eat into the more compelling story of Dent (an almost-equally impressive performance from Aaron Eckhart), who is absent from the plot for long periods of time and his inevitable late-film transformation is not really given enough time to be fully convincing.

A more basic problem is that the movie is too long, and several major climactic set-pieces take place some considerable time before the end of the movie. Hollywood CGI whiz and blogger Mojo has advanced a theory that The Dark Knight actually is an amalgamation of two films into one, and if the Joker and Dent strands had been separated (perhaps by having the Joker's antics and his late-movie plot involving two ferries, which come out of nowhere, as one film and the fall of Dent in another) both would have been stronger. As it stands, the latter third of the movie feels considerably less-developed than the rest, and the series of apparently-but-not-quite final moments in the movie begins to challenge Return of the King at times for its frustration.

Performances are universally excellent. Eckhart and Ledger get special nods, but supporting hands from the first movie Gary Oldman, Morgan Freeman and especially Michael Caine all give excellent performances. Caine in particular impresses, with Alfred's experiences as a soldier giving him a moral authority that he uses to convince Batman to do the hard thing at times, paying off in a spectacular moment when Batman makes precisely the opposite decision to what the audience expects. Similarly, after a relatively minor role in the first movie Oldman steps up as Gordon and makes him a credible threat to the city's criminals. In a busy movie, Freeman's character of Lucius Fox even has time for an amusing subplot in which he discovers a Wayne Enterprises employee who has figured out where a chunk of the company's revenue is going and why. Maggie Gyllenhaall, taking over the Katie Holmes role from the first film (thankfully, as Gyllenhaal is a much better actress), also impresses. Christian Bale does good work as Wayne/Batman, but in a movie of stand-out performances from even the secondary cast, Bale merely settles for being pretty good.

The Dark Knight (****) is an effective, impressive and dark film with stand-out acting and an interesting thematic arc, but occasionally it lacks focus and has some scripting and pacing issues. It is definitely one of the better superhero movies of recent years, but I'd hesitate about calling it the best. What is does do, however, is aim for something much higher than most superhero movies even think about achieving and if it falls short, it remains an impressive ambition. The film is available now on DVD in the UK and USA, and alson on Blu-Ray in the UK and USA.
Posted by Adam Whitehead at 19:33


paying off in a spectacular moment when Batman makes precisely the opposite decision to what the audience expects.
Hmmm, I haven't seen the movie since it came out, so it might be some other moment, but are you talking about when Batman has to choose between saving Harvey or Rachel? Because, IIRC, the Joker does a switch-about here, telling Batman the wrong locations on purpose, so actually does try to save Rachel.
Ofc, you could be talking about a completely different moment that I'm not remembering right now :)

Gotta say, Wert, I disagree with almost every line of this review.

So, taking that literally you think it's a bad movie with a rubbish cast but has great pacing and is too short?