Every time a Command and Conquer game has appeared, a new iteration of its brighter, shiner, much stupider cousin, the Red Alert series, has rapidly followed. With Command and Conquer 3: Tiberium Wars proving to be a big hit in 2007, the news that Red Alert 3 would be making an appearance in late 2008 wasn't exactly a major surprise. 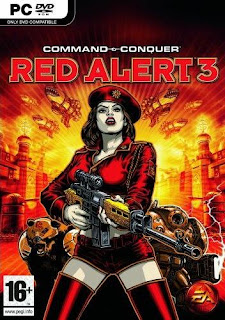 Red Alert 3 opens towards the end of Red Alert 2, with the Allies about to overrun Moscow. In a last-ditch gambit, the Soviet leadership time-travels back to 1927 and kills Albert Einstein, after he had executed Hitler in the original Red Alert (thus ensuring WW2 never happened, the core premise of the Red Alert series) but before he started developing high-tech weaponry for the Allied cause. Upon returning to their home time, the Soviet leadership discovers that they have proven victorious and driven the Allies from the European mainland. However, they also discover that, rather than joining the Allies as in the original timeline, Japan has become an independent nation, the Empire of the Rising Sun, and forged a vast and powerful war machine which it has now unleashed on both the Allies and Soviets. With no nuclear weapons to hold them at bay, the Empire seems poised to take control of the entire globe.

Red Alert 3 is a throwback to the good old days of the earlier Red Alert games, throwing out the tighter narrative focus and sequential campaigns that Tiberium Wars brought in and reverting to having each of the three campaigns in the game take place in an alternate history to the others. For example, one of the Japanese missions has you racing to defend the Empire's colony at Pearl Harbour from a surprise Allied naval assault (irony!), an event not mentioned or replicated in the Allied or Soviet campaigns, which is a bit odd. However, those used to the prior Red Alert games are used to this by now, so it is not a major issue.

Unfortunately, whilst Tiberium Wars proved to be the best Command and Conquer game to date, with a tight storyline, fast-paced combat and doing a sterling job of updating the geriatric SAGE engine, Red Alert 3 is not as successful. The game engine is looking increasingly ancient these days, especially when compared even to the two-year-old Company of Heroes, and the bright, primary colour scheme of Red Alert 3 doesn't play to it as well as the darker, muted C&C3 aesthetic. The exception is the new water system, which is fantastic but also system-intensive, with even more powerful machines likely to stutter during busy naval battles. There is also disappointment with the unit roster: the Allied and Soviet unit selection is mostly just copied over from Red Alert 2, with a few new units thrown in.

On the plus side of things, the new Japanese faction is innovative, with many units lifted directly from anime, such as the mecha which can transform from a ground robot to a fighter, which seems to directly inspired by the Valkyrie from Macross (aka the Veritech from Robotech). In addition, several of the Japanese cut scenes use music cues which seem to be heavily inspired by Ghost in the Shell's soundtrack. This new faction requires a totally different approach from the Allies and Soviets, and their part of the campaign proves to be the most challenging and interesting.

The campaign itself is delivered through the familiar mix of briefings and FMV. An all-star cast leads the way, with Tim Curry as the Soviet Premier, Jonathan Pryce as the Allied Field Marshal Bingham and George Takei as the Japanese Emperor Yoshiro. The higher quality of acting means the FMV side of things is not quite as ludicrously camp as Red Alert 2, but the story is still extremely daft, filled with plot holes, military impossibilities (how the hell did the Japanese get to Stalingrad?) and, for some reason, an apparent reliance by all three sides on attractive young female military advisers. None of this is exactly new to seasoned Red Alert vets, however. Suffice to say that the tradition of silliness in the spirit of the prior Red Alert games is carried on here.

All in all, Red Alert 3 (***) is fun and fast-paced, but it seems a bit too contrived compared to its forebears. The game isn't quite as intense and furious as C&C3 gets in multiplayer, and the storyline isn't far off from being a comedy, meaning you don't get as much emotional investment in it, the games or the characters. For knockabout entertainment, Red Alert 3 suffices but it won't be dragging RTS fans away from Company of Heroes multiplayer for very long. The game is out now on PC (UK, USA) and X-Box 360 (UK, USA).

A Note on DRM: The PC version of Red Alert 3 is protected by SecuROM, the same digital-rights-management software that previously blighted Spore and Mass Effect. It requires an internet connection for the game to work even in single-player and the game is limited to five 'activations'. EA has not been forthcoming on what constitutes an 'activation' but experiments by players have shown that even simply changing a graphics card can use up an activation. After a chorus of complaints, the latest patch allows the game owner to de-authorize the game prior to carrying out any modifications to their PC, so they don't use up an activation, but it is still a hassle for players. Naturally, all of this proved totally unnecessary as the game was hacked and leaked onto the Internet a week before its official release date.
Posted by Adam Whitehead at 22:00