Given all the praise and excitement surrounding The Dark Knight, the superhero movie Iron Man released just a few weeks earlier was somewhat overshadowed. However, reviews of Iron Man were almost universally positive at the time, so I was looking forward to sitting down and enjoying the movie. 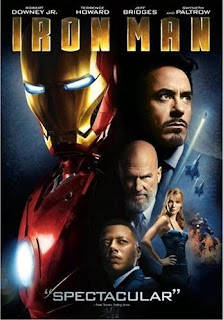 The resurgent Robert Downey Jr. plays Tony Stark, a hyper-rich genius engineer and unstoppable womaniser who builds extremely lethal weapons for the US military. His latest invention is a massive multi-warhead variation on the 'bunker-buster' missile, one that is meant to level entire Afghan mountain ranges. Stark is kidnapped by stereotypical Afghan terrorists during a demonstration of his new weapon and forced to build them some newer and more lethal versions of the same weapon. Stark is aided in his work by a gentle local educated Afghan man who is brought in as a translator but in the space of about ten minutes has convinced Stark that making massive destructive weapons isn't good for his soul and he needs to change. Stark, despite being under constant 24-hour video surveillance, is able to build a massive robot suit armed with flamethrowers and a jetpack instead of the promised missile, and is able to effect an escape, although sadly not to the theme tune from The A-Team.

Having checked that I hadn't made an error and picked up a copy of a comedy movie by accident, I continued watching in mounting disbelief as Stark returns to the USA as a new, more moral man, deeply changed by his horrifying experiences in the Afghan mountains. The newer, more caring Stark decides to build a more uber version of his metal suit so he can personally go off and slaughter the terrorists with rocket launchers and flamethrowers. Of course, hijinks ensue and the story ends in a series of massive explosions. Who would have thought?

Iron Man is a deeply stupid movie with plot holes and logical flaws so vast they render the story almost nonsensical in places. However, the movie remains brainlessly entertaining thanks to the almost single-handed efforts of Robert Downey Jr., who was clearly enjoying himself far too much making this hokum. His portrayal of Stark works excellently, despite the highly dubious writing, and I suspect his best moments were all ad-libbed. Suffice to say, without its star working above and beyond the call of duty, this movie would be a total failure. Gwyneth Paltrow stands around being, well, Gwyneth Paltrow and Jeff Bridges manfully deals with a curious baldness-beard combination. There's also a lot of guff about a new energy source Stark spontaneously created in his Afghan cave that dozens of the finest scientists in the world cannot replicate in their state-of-the-art labs, but none of it really matters.

Iron Man (***) is quite possibly the most sloppily-written film I've seen since Pearl Harbour, but it's also a lot of fun, as long as you strictly remember to put your brain in neutral before watching it. It is now available on DVD in the UK and USA.
Posted by Adam Whitehead at 22:03

Stark wasn't swayed by Yinsen's nice words. He was pissed about the perversion of his father's mission: to provide the good guys with awesome weapons.

Iron Man is smarter than Armaggedon, while just as entertaining. I saw it to be on the level of Spiderman 2 and Batman Begins.

Or perhaps The Assassination of Jesse James, for a non-comic book movie.

Pearl Harbor was much, much worse than Iron Man. At least Iron Man seemed to be aware of the fact that it was supposed to be a fun and light popcorn flick, and didn't come across as an overwrought and awfully acted failed dramatization.

Fully agreed. The comparison was only because the last time me and my friends sat going, "What?" and, "That doesn't make any sense," so much was during Pearl Habour. However, on an acting and brainless entertainment level, Iron Man was actually fun and amusing, whilst Pearl Harbour was just a car crash.

I thought Iron Man was a riot. It was funny, not too nerdy and plenty of action and a light dusting of character development.