2057. In the depths of the Solar system, large spacecraft routinely intercept and redirect ice asteroids and comets into Earth orbit, where their raw materials can be used to fuel Earth's growing economy and incessant need for raw materials. When Saturn's moon Janus inexplicably leaves its orbit and heads out of the Solar system in the direction of the star Spica, an 'ice-pusher' ship named Rockhopper is the only vessel positioned to intercept it. The plan is for the ship to tail the anomaly for a week before returning to Earth. Naturally, complications ensue and the crew of Rockhopper are forced to make a home on Janus as it accelerates towards lightspeed, which will carry them to Spica in 250 years, although thanks to time dilation only a dozen years will pass for those on board. 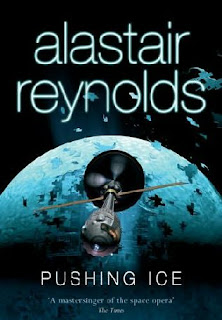 Pushing Ice is a hard SF novel in the 'Big Dumb Object' tradition, following in the footsteps of Arthur C. Clarke's Rendezvous with Rama, Larry Niven's Ringworld and Greg Bear's Eon. However, unlike a lot of BDO books which tend to put characterisation way behind spectacle and awe, Pushing Ice is centred firmly on the relationship between two female crewmembers of the Rockhopper, Captain Bella Lind and navigator Svetlana Barseghian, two firm friends who suffer a catastrophic falling-out over the Rockhopper's new mission and whose subsequent relations colour much of the novel. This gives the book an emotional centre which helps make it easier to relate to the more traditional, awe-inspiring spectacle stuff that unfolds later on.

Whilst unrelated to any of his other novels, Pushing Ice features Reynolds' trademark use of non-faster-than-light travel and the inevitable closer interrelationship between humanity and its machines, although broadly along more positive lines than his Revelation Space novels. Pushing Ice is also more relatable, as its technology is less exotic and much closer to current day levels, meaning his characters have to work even harder to survive in the hostile environments they find themselves in.

Pushing Ice becomes a multi-generational tale as life on Janus during and after is voyage unfolds and Reynolds' story reaches impressive new levels of invention as we discover more about the alien Spicans and their goals. There is a strong similarity here to Clarke's Rama Cycle, but he makes more interesting and focused points in considerably less time and pages than Clarke's earlier work, and the characters he uses to achieve that goal are considerably more interesting.

Pushing Ice (****½) doesn't quite hit the same high as Reynolds' masterwork Chasm City, but it comes damn close. As a hard SF novel in the Big Dumb Object tradition, Pushing Ice is a triumph, but achieves its success with more emotion and heart than most such books. This novel is thoroughly recommended and is available from Gollancz in the UK and from Ace in the USA.
Posted by Adam Whitehead at 20:35

Enjoying this at the moment, but after reading A Fire Upon The Deep beforehand, I'm finding the writing style hmm, I don't know, not very good?

Some of the dialogue doesn't feel right either. Forced.