The new Battlestar Galactica webisodes, meant to bridge the two halves of Season 4, have started appearing on the Sci-Fi Channel website. Happily, the webisodes are available on YouTube for those outside the USA. The link should also lead to a version of the webisode with commentary by writer Jane Espenson. 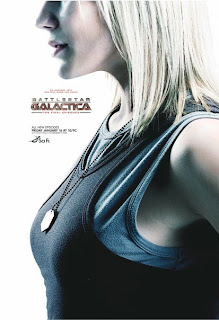 The webisodes are called The Face of the Enemy and contain MAJOR spoilers for the end of Season 4.0 if you haven't seen it yet, so beware.

The release schedule for the webisodes is a bit unclear, as there are 10 meant to air in the weeks leading up to the first proper episode back on 16 January, so keep checking Galactica Sitrep regularly to see if new ones have been released!
Posted by Adam Whitehead at 14:49

What do you think of this then? Good / bad?

I think it's quite good to be honest

It's only the first 5 mins of what will probably turn out to be the equivalent of a 25-30 minute episode though, so I'll withold judgement until I've seen the whole thing.