Released in 2007 and based on Neil Gaiman's 1998 novel, Stardust is an unexpected gem among recent SF and fantasy films, a fairytale with some interesting and modern twists delivered by a cast on fine form. 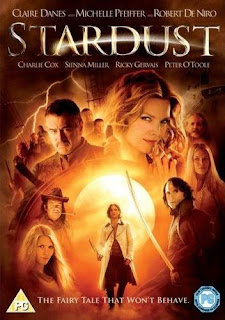 The movie opens with young Englishman Dunstan Thorn crossing the forbidden wall near his village to investigate the magical kingdom that is said to lie beyond. There he has an amorous encounter with a young woman claiming to be a captive princess. Nine months later, after Dunstan's return home, a baby is deposited outside his house. Dunstan raises Tristan (Charlie Cox) to become a fine and adventurous young man, who becomes besotted with the most beautiful girl in the village, Victoria (Sienna Miller). After they see a shooting star fall beyond the wall one night, Tristan vows to find the fallen star and give it as a gift to Victoria to prove his worthiness.

Unfortunately for Tristan, the shooting star is the result of a scheme by the late King of Stormhold (Peter O'Toole), who has hurled his amulet from his bedchamber and decreed that whoever of his surviving sons who finds the amulet will be worthy to succeed him. The amulet's return to Earth has knocked a star named Yvaine (Claire Danes) out of the sky, forcing her to take human form. Tristan swiftly locates her and decides to fulfil his promise to Victoria, but their return to the wall is strewn with obstacles, not least in the form of the witch Lamia (Michelle Pfeiffer) who wishes to find the star and consume it to restore youth and long life to herself and her sisters. The King's squabbling sons are also searching for the star as well. The result is a road movie taking in an airship commanded by a fearsome pirate (Robert De Niro) who harbours a secret, a magically-created inn, a unicorn and lots more as well.

Stardust is a tremendously good movie. The number of fantasy films (excluding Lord of the Rings) that have really worked in the last few years is pretty low, and you arguably have to go back to The Princess Bride to find the last undisputed classic in the genre (although no doubt some would speak up in favour of The Dark Crystal or Labyrinth). Stardust works because it has excellent pacing, fantastic acting, great dialogue and a strong script which shoots down inconsistencies and plot holes whenever they show up. Charlie Cox and especially Claire Danes make for appealing protagonists and De Niro gives his all in a gift of a role with the self-contradictory Captain Shakespeare. Pfeiffer's excellent turn makes you ponder why she doesn't seem to crop up very often in movies any more. Ricky Gervais is less successful in a minor cameo, but luckily (despite his appearance on the DVD cover) he is in the movie for barely two minutes, so that isn't an issue. The story takes some highly unexpected twists and turns before an impressive showdown is reached, and the ending, whilst a happy one, isn't exactly saccharine (the body count needed to get there is quite high).

It's difficult to think of any negatives with this movie. It's light, breezy, fresh and fun but not shallow. A great story with intelligent characters it is laugh-out-loud funny in many places, but with some real moments of pathos and emotional intensity elsewhere. Fantasy movies as good as this don't come along very often these days, so check it out.