Half the World by Joe Abercrombie

The High King of the Shattered Sea is displeased with the new King of Gettland and his defiance. Forces religious and military gather to bring Gettland to heel, but the king's advisor is crafty and cunning beyond his years. Yarvi brings together a new fellowship to travel halfway across the known world to the First of All Cities and there make an audacious play for an alliance. Unfortunately, his crew consists of cutthroats, ex-criminals, disgraced boy warriors and violent murderers. 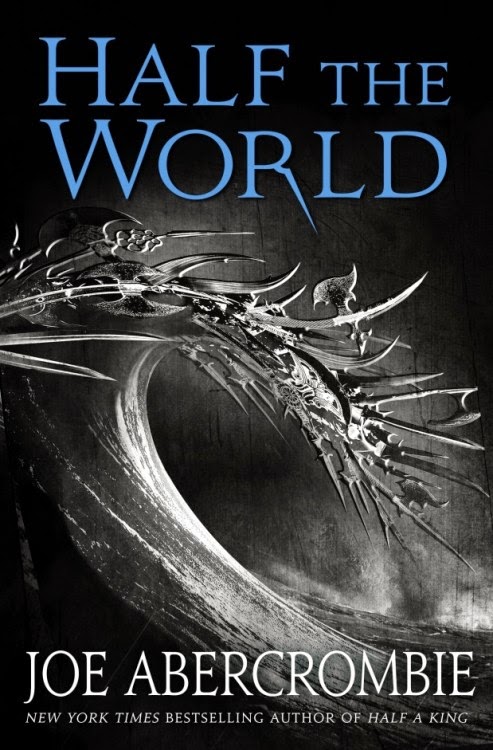 Half the World is the middle volume of The Shattered Sea and picks up several years after the end of Half a King. This novel features a structural shift from the previous one, with the narrative now divided between two new characters - Brand and Thorn - and Yarvi relegated to more of a supporting/mentor role. It's a nice structural twist that means that Yarvi's storyline continues from his previous book, but is now presented more in flashes and glimpses from the other characters. If you haven't read Half a King, you won't notice too much of this but those who have will find themselves able to follow Yarvi's story as it develops mostly off-stage.

Thorn is where much of the book's marketing has been directed and it's easy to see why. Less of a tomboy and more of a walking ball of anger, Thorn could be the milder, younger sister of Ferro (from The First Law Trilogy). Her character arc is - at least somewhat - traditional but she remains a vibrant and well-written protagonist. Brand, the young warrior disgraced for being too nice and who has to make good, is a much more standard character but Abercrombie gives him enough flair and memorable moments (including an eye-watering moment where he has to stop a ship being ported from rolling over).

There's some splendid action and some intriguing politicking, but it's the frigid atmosphere (turning more clement as our characters journey south and off the edge of the map) and the relentless pace that make this novel so successful, and more enjoyable than its forebear. Abercrombie is still working with a shorter word count than normal here and it helps maintain focus and drive. This is a 400-page novel where the pages fly by. Abercrombie is also upping his game with his prose, with some darkly delicious dialogue and more poetical moments peppering his more traditional style of black humour. Even the worldbuilding is taken up a notch, with the idea that the Shattered Sea might be a far future, post-apocalyptic part of our world developed further.

Half the World (****½) is a resounding success and an improvement on Half a King on almost every front. It will be released on 12 February 2015 in the UK and five days later in the USA. Highly recommended.
Posted by Adam Whitehead at 18:44

Email ThisBlogThis!Share to TwitterShare to FacebookShare to Pinterest
Labels: half the world, joe abercrombie, the shattered sea

Abercrombie has yet to disappoint but I find myself hesitant to read the novel because the protagonist of the first novel now plays a secondary role. I was burned earlier in the year with Tower Lord. Anthony Ryans debut was superb and Idk if its the fact that the second novel was released through a publishing house or the natural unsteady footing of a second novel but the book was a massive disappointment. The central character Vaelin al Sorna is relegated to a secondary role. A hitherto unknown woman who attempts to assasinate him is the main protagonist and the story revolves around her suddenly blossoming from a novice to a master warrior on Vealins level practically overnight while dealing with her sexuality. The first was just terrible since it breaks the tension of the novel by covering her in plot armor and diminishing the prowess of the so called dangerous foes, the second wouldn't have been a problem if it wasn't such a main plot point. I personally wanted more Vaelin badassery not a LGBT mellodrama. I'm all for diversity in sci fantasy but not at the expense of the quality of the novel. Anthony Ryan just did it wrong, very wrong. I blame mostly the fact that Blood song 2 was not about the character I was waiting two years to read more of. So I await HaK with trepidation.

Read the book in two days. Now I don't know what to do until July.

Aber is so easy to read that you fly through the pages, the pace is quick - and satisfyingly so, no travelogues in this series - the characters enjoyable and the story great. Buy it. Hang it on your wall or put it under your pillow, for t'is a great book, and it deserves to be mounted.