Steles of the Sky by Elizabeth Bear

Temur has raised his standard at Dragon Lake, gathering forces together for a final showdown with Al-Sephehr before he can bring about his plan to resurrect the Carrion Prince. Unexpected allies join Temur, but his army is still dwarfed by that of the enemy. 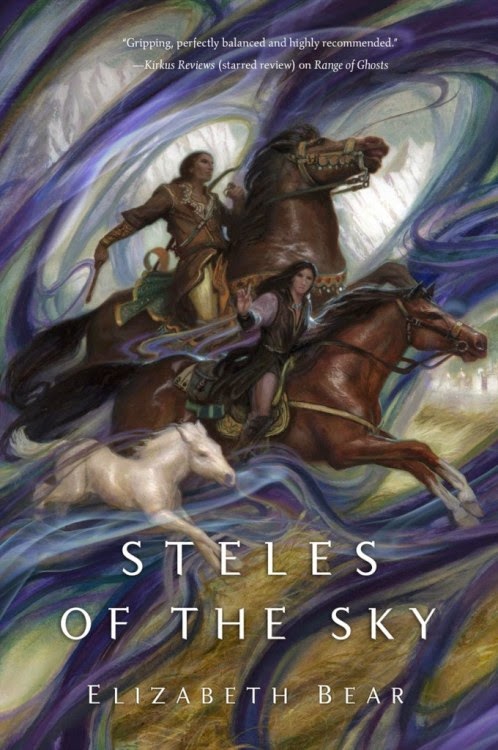 Steles of the Sky concludes The Eternal Sky, Elizabeth Bear's thoughtful and intelligent epic. Inspired by the history and vistas of Central Asia, The Eternal Sky puts character and dialogue ahead of carnage and mayhem and, for those of a cliched bent, could be described as a thinking reader's fantasy. It's a restrained novel that dwells on the humanity of its characters as much as the magic and mystery, and far moreso than the action. Certainly fans of authors like Guy Gavriel Kay will find much to reward them here.

That is not to say that action is not present, and what there is well-presented, but Bear's focus lies elsewhere. The rich tapestry of varied characters that we have enjoyed in previous volumes is back, and as the storylines dovetail into one another it's interesting to see characters reacquainting themselves with one another or meeting for the first time. It's a more balanced book, with the Temur/Samarkar 'main' strolling having equal weight here with the likes of Edene, Tsering and Saadet. Bear's enviable ability to create cultures with distinct customs that are influenced by real history but are also original creations also reaches its apex here, with the differences between these groups strengthening rather than dividing them.

The characterisation is rich and nuanced (particularly of Edene, whose storyline takes a more humane turn than I was expecting) and Bear skirts the edges of 'dark' fiction without either pulling her punches or digressing into needless violence. What Bear does instead, especially with Al-Sephehr and Saadet, is hints at the darkness of the souls of her antagonists which is more difficult but ultimately more rewarding.

There are reservations: the climactic battle is over in a handful of pages and some storylines feel a little perfunctory in their resolutions. But perhaps I was expecting a more slavishly traditional fantasy novel than what we got instead, which is far more interesting, rewarding and poetical.

The nuances of character in the novel are one of the best parts.

And of course, the worldbuilding.