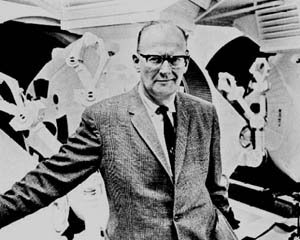 Arthur Charles Clarke was born in Minehead, Somerset on 16 December 1917 and grew up reading the early SF pulp magazines. During WWII, Clarke worked in the RAF on radar projects, and contributed to the development of Ground-Approach Radar, which later played a key role in the Berlin Airlift. After the war he achieved a degree at King's College, London and became involved with the British Interplanetary Society, later going on to serve as its chairman. In October 1945 he published an article in Wireless World outlining how relay satellites positioned in geostationary orbit 36,000 kilometres above the Earth could be used to create a global communications network. After the publication of the article the geostationary orbit became known as the 'Clarke Orbit', a term still used today by the International Astronomical Union.

Clarke begun his writing career by penning short stories in WWII. His first sale was Rescue Party, which appeared in Astounding Science Fiction in May 1946. In1948 he wrote The Sentinel for a BBC competition, but it did not win. The same year he also wrote Against the Fall of Night, one of his earliest classic stories, and in 1950 wrote another short story called Guardian Angel. In 1951 he began writing full-time, quickly publishing his first two novels, Prelude to Space and The Sands of Mars, that year. In 1953 he rewrote Guardian Angel as Childhood's End, which rapidly became his first truly successful novel, and the one that brought him to international attention, particularly in the USA. In 1956 his short story The Star won him his first Hugo Award. In 1958 he moved to Sir Lanka, then still called Ceylon, and remained there for the rest of his life, attributing his longevity to the climate and his love of scuba diving. 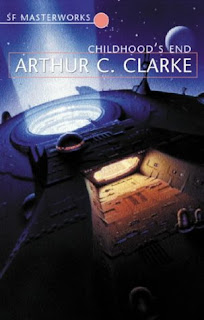 A string of successful novels and short story collections followed in the 1950s and early 1960s, including A Fall of Moondust, The Deep Range and The City and the Stars, his novel-length rewrite of Against the Fall of Night. In 1964 Clarke began a collaboration with film-maker Stanley Kubrick designed to make 'the proverbial good science fiction movie'. They used the jokey working title How the Solar System Was Won and Clarke's story The Sentinel as a basis for the project before retitling it 2001: A Space Odyssey. Production of the movie, and Clarke's accompanying novel, took over four years and involved the creation of never-before-used special effects technology. The movie was released in 1968 to immediate acclaim and won plaudits from critics for its innovative visuals and stunning use of classical music, as well as its philosophical outlook. However, the movie became a popular hit due to its basic storyline (about a murderous computer) and its 'trippy' end sequence. Clarke became a popular figure after the movie came out and was an official commentator for the Apollo 11 mission to the Moon in July 1969.

In 1973 Clarke published what became his most successful novel, Rendezous with Rama. It was his first novel to win the Hugo Award for Best Novel, but it simultaneously won the John W. Campbell Award and the Nebula as well. It remains the only book to have won all three awards. Thanks to Clarke's friendship with Sovient cosmonaut Alexei Leonov, the novel was also published in the Soviet Union with absolutely no edits or changes from the original text, an extreme rarity for Western books during the Cold War. After the success of Rama, Clarke entered a period of growing critical acclaim. He released a further string of successful novels - Imperial Earth, The Fountains of Paradise, 2010: Odyssey Two, and The Songs of Distant Earth and 2061: Odyssey Three - as well as producing and presenting a television series, Arthur C. Clarke's Mysterious World. 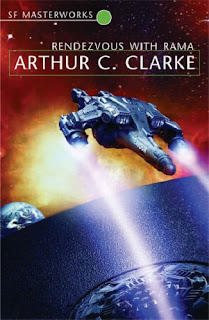 In 1988 Clarke began to seriously suffer the effects of post-polio syndrome (having previously suffered from polio in 1959). He became increasingly reliant on wheelchairs and left Sri Lanka less often. His writing also changed, with a shift to collaborations with other authors such as Gentry Lee, Michael P. Kube-McDowell, Mike McQuay and Stephen Baxter. Two of his last solo novels, The Ghost from the Grand Banks (1990) and The Hammer of God (1993), were not as well-received as earlier efforts, although both proved influential. Ghost predicted the problems associated with the Millennium Bug, whilst God, about an impending asteroid collision, both directly influenced the movie Deep Impact and ironically featured a NASA project named SPACEGUARD, which was inspired by Clarke's own novel, Rendezvous with Rama. His last solo novel was 3001: The Final Odyssey, published in 1997 after Clarke received the largest advance in SF history for the novel. The book was partially a 'greatest hits' of Clarke's ideas, taking in computers, computer viruses, ancient alien intelligences and space elevators (the idea for which - first visited in The Fountains of Paradise - he believed he would eventually be best-remembered by history).

In 1989, Clarke had been made a Commander of the British Empire and in 1998 was made a Knight Bachelor, although the ceremony was delayed until 2000 due to unfounded allegations about Clarke's personal life made by the The Sunday Mirror, which subsequently withdrew them.

Sir Arthur C. Clarke, CBE, died at 1.30 am, 19 March 2008, local time, from breathing difficulties and complications arising from his post-polio syndrome. He left behind no immediate family, but a colossal body of work and the condolences of millions of fans.

On the occasion of his 90th birthday, he sent this message to his fans:

"I want to be remembered most as a writer. I want to entertain readers and hopefully stretch their imaginations as well.

"If I have given you delight in all that I have done, let me lie quiet in that night, which shall be yours anon."

For all his fame and prolific output, only one movie has ever been directly made based on his work: 2010. 2001: A Space Odyssey was a collaborative effort between Clarke and Kubrick, but with substantial differences between movie and novel. A film version of Rendezvous with Rama (directed by David Fincher and starring Morgan Freeman) has been in development for some years.

"Look," whispered Chuck, and George lifted his eyes to heaven. (There is always a last time for everything.)

Overhead, without any fuss, the stars were going out.