The Separation is the eleventh and most recent novel by British SF author Christopher Priest, published in 2002 when it promptly won the Arthur C. Clarke Award, the BSFA Best Novel Award and the Grand Prix de l'Imaginaire. For reasons that remain unknown, the British publishers tried to kill the book at birth, releasing it with a minimum of fanfare and remaindering it as soon as humanly possible. Luckily, Gollancz saved the book and released it in a handsome paperback edition in 2004, where as part of their Priest reprint range it has remained in-print and with increasing critical acclaim ever since. 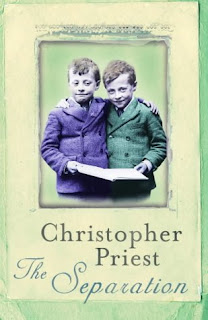 The Prestige is regarded as Priest's best and most well-known book. The Separation is a book that at one moment is similar (another novel about duality and identity) and at once utterly different. It very nearly defies a plot summary, since any attempt to convey the storyline would be in itself verging on a spoiler. But I will do my best.

A historian working in 1999 becomes intrigued by a minor historical figure, a pacifist in Second World War Britain briefly mentioned by Churchill in his war memoirs. This man, JL Sawyer, is soon revealed to be one of a pair of identical twins. In 1936 Jack and Joe Sawyer take part in the Olympic Games in Berlin as coxless rowers, winning a bronze medal, but soon the outbreak of war separates them: Jack becomes a bomber pilot, tormented by the destruction he wreaks each night on German cities. Joe, the pacifist, becomes a Red Cross ambulance driver helping find survivors of the nightly Blitz on cities such as Manchester and London. Their stories are related as a series of diaries and memoirs written by both and also in (mostly fictional) historical documents relating to the period, some by such personages as Churchill, Goebbels and Rudolph Hess. Other devices come into play, particularly towards the ending of the book.

Priest is well-known for his slippery plots, pulling off narrative sleights-of-hand and 'twist' moments that make M. Night Shymalan's films look like the work of an amateur hack. Here he seems to reveal the twist very early, within a few pages (and silencing the critics who claim his books are rarely 'overt' SF). However, he rapidly pulls the rug out from the reader's feet again, and then again. Amidst the confusion generated by the shifting narrative, however, a pattern slowly emerges which seems confirmed in the extremely haunting conclusion. Some may deem the ending to be a 'cop-out' but nothing it as it seems, for the revelation apparently inherent in the book's finale does not explain events earlier in the book, leading to much greater thought being demanded from the reader to examine the truth of the story.

The Seperation, like most Priest books, hides an incredible amount of depth behind its deceptively simple, almost sparse prose. Characters are built up and deconstructed with nearly contemptuous ease in front of us. Priest captures the atmosphere of WWII Britain and the moral confusion of the reality of war with vivid storytelling techniques and the use of statistics and historical texts (real and feigned). Priest even educates the reader in areas about the war that have not been very well explored (the state of conscientious objectors in WWII Britain is not something I had previously considered).

The Separation is an extraordinary book, even moreso than The Prestige. The lack of an 'absolute' conclusion or explanation for what has happened in the book may irritate some readers, but I found it extremely refreshing to read a book that demands that the reader actually think, rather than being spoon-fed the answers on a plate. It is in places beautifully written: Priest's take on Churchill is so good I was startled to find several impressive and very 'Churchillian' pieces of dialogue were Priest's own invention and not taken from any kind of historical record. In other places the theme of the book is so vast that sometimes it threatens to overwhelm the more human moments of the story (the reader is perhaps invited to furiously think "What the hell is going on?" rather than simply sit back and have the tale unfold). However, this is more likely to have just been my reaction to the story rather than an inherent problem. I would say that I found myself preferring The Prestige to The Seperation by a hair's breadth, but this may just have been brain hoisting the surrender flag. After greater reflection, I suspect I will find myself approving it the more of the two books.

The Separation is an excellent, headily atmospheric novel that forces the reader to think about what they are reading carefully. I recommend it without hesitation. This book was nearly stillborn due to the stupidity of the original publishers and the literary world would be a much poorer place without it.

The Separation (*****) is available from Gollancz in the UK in two editions: as part of their Christopher Priest range and as part of their Future Classics range. The book is also available in the USA from Old Earth Books.
Posted by Adam Whitehead at 15:17

I've seen the movie; but I guess I'll have to read some of Priest's books as well. cheers,
thrinidir

Hey, thanks for the kind words about The Sep. I thought it a great read, so much so I reprinted it here in the US.

Just as an FYI, there is a 500 copy signed edition - at no extra cost - when ordered directly from Old Earth.

Just finished reading this after reading this old review. Amazing read, I need to do some thinking now, thanks!