Troy: Lord of the Silver Bow by David Gemmell

David Gemmell was a prolific and popular author of heroic fantasy, penning more than thirty novels (most of them well-receved) between the 1984 release of Legend and his death in the summer of 2006. His final project was The Troy Trilogy, an epic retelling of the Trojan War, its causes and consequences, marrying the likely historical reality of the conflict (now seen less as a story of doomed love and more the explosion of tensions building up over decades between the Greek cities and the Hittite Empire) with some fantastical elements, although these are mostly restricted to prophetic dreams. Arguably the trilogy, or at least Lord of the Silver Bow, barely qualifies as fantasy, instead more neatly falling into the subgenre of the 'speculative historical' novel shared by the likes of Cornwell's Warlord Chronicles. 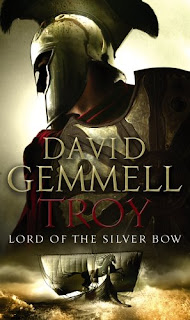 The time is three thousand years and more in the past. The world is dominated by the Great Green, the vast sea that divides the Greek city-states (now coming under the dominion of Mykene and its ruthless king, Agamemnon) from the Hittites and their colonies in the near east, Assyria further to the east and Egypte to the south. Lord of the Silver Bow is the story of several individuals. Helikaon, Prince of Dardania, is a warrior and sailor beyond compare, dubbed 'The Golden One' for his legendary luck and pride. He has built the Xanthos, the biggest ship on the Great Green, which sailors fear as it challenges the might of Poseidon. Helikaon is being hunted by assassins and has made an enemy of the Mykene for slaughtering their hero Alektruon, a pirate and reaver, but is unaware that Agamemnon has been told of a prophecy that he will be responsible for Agamemnon's downfall.

Meanwhile, the beautiful Andromache, exiled to the island of Thera by her father, is recalled after the death of her sister and is pledged to marry Prince Hektor of Troy, a warrior of legend. Her journey to Troy brings her into contact with Helikaon and his crew, a meeting that will spark many unfortunate events to come. The last of the three central characters is Argurios, a mighty Mykene warrior who loaths Helikaon, but destiny and honour compel him to fight alongside the Golden One and forge a story that will become a legend across the Great Green and challenge Agamemnon's wisdom and reputation.

Around these three central characters other lives become entangled: Xander, the ship's boy who becomes interested in healing; the strange Trojan girl and prophetess, Kassandra; the Egyptean exiled prince Gershom; the mighty warrior and legendary tale-spinner Odysseus, King of Ithaka; and King Priam himself, a contradictary figure, cruel and hateful one moment, with occasional flashes of honour and mercy.

Lord of the Silver Bow is nearly a flawlessly enjoyable book, with a depth of writing that is hugely engrossing and characters that leap clear of the page in their vividness. Such is the strength of the story that you forget you are reading a story that you know the end of, and the moments in the story that do intersect with the legend are all the most impressive for that, such as when the reader realises that Helikaon is actually Aeneas and when Prince Paris crops up for one of his extremely infrequent appearances. The combat sequences are brutal and convincing; the characters' philosophical musings are short, to the point and do not slow down the action; the drawing of the characters is so well-achieved that some of the deaths at the end of the book are almost physically painful to read about.

Lord of the Silver Bow (****½) is laying the groundwork for the war to come, but is in itself a hugely accomplished and significant epic fantasy novel with enough closure to make it a great self-contained work. The other two books in the sequence are Shield of Thunder and Fall of Kings, which I will read and review promptly.

The novel is available from Corgi in the UK and from Ballantine in the USA.
Posted by Adam Whitehead at 16:19