The Prestige is the ninth novel by the British SF author Christopher Priest. It was first published in 1995 and won the World Fantasy Award for that year. It is Priest's best-known novel and apparently his most successful. An excellent film version by Christopher Nolan (Batman Begins, Memento) starring Hugh Jackman and Scarlett Johansson, was released in late 2006. 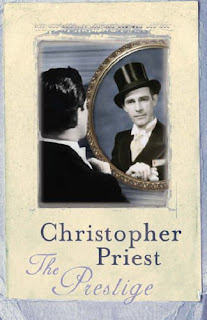 The Prestige is the story of two feuding magicians from the late 19th Century, the aristocratic Rupert Angier and his working-class nemesis, Alfred Borden, and how that feud affects later generations of their families, personified in the mid-1990s by Borden's descendent Andrew Westley and Kate Angier. A strange mystery has haunted Andrew's life and his search for the answer leads him to Kate and the story of the feud.

From there the novel takes us back some 130 years and relates, in two separate sections, the life stories of Alfred Borden and Rupert Angier. Borden's story is told as a somewhat (deliberately) confused narrative, supposedly a commentary on a book on stage magic, but Borden's need to tell his story takes over and he goes into detail about his life and the feud with Angier. We learn that Borden develops an incredible magic trick which no-one can fathom, a trick which is then improved upon by Angier, to Borden's fury. The narrative then switches to Angier's more formal diary. Angier's story forms the bulk of the novel and takes us through his youth and his slow beginnings at the art of magic until his fateful meeting with Borden and the consequences of that meeting.

Priest tells his story by shifting between four first-person narratives (Andrew and Kate in the present, Rupert and Alfred in the past), altering his prose style between the two periods with apparent ease and painting these four central characters and the other characters described in their tales with depth and layers. As well as giving an insight into the world of stage magic he brings turn-of-the-century Britain to life with its slow, reluctant letting go of the old century and its embrace of the new, symbolised by the power of electricity. Electricity itself is nearly a character in the novel, the awe which Angier holds it in described with a nearly fetish-like quality and brought to life through the historical figure of Nikolai Tesla, who plays a minor but key role in the narrative.

The Prestige is a puzzle built upon twists, turns and conflicting mysteries. It's like an M Night Shymalan film but one where the twist you were confidently expecting is suddenly yanked out of sight and something unforseen being dropped in its place. Some may question whether if this is really an SF novel, so subtle are the ideas being explored here, but by the end of the book more overt SF elements have emerged and it is a tribute to Priest's writing that he keeps things firmly grounded in reality. The ending, when it comes, may strike some as abrupt, but on another level it is the perfect, ambiguous ending to a nearly perfectly-tuned mystery. The Prestige is one of the most finely-written, 'different' SF novels I've ever read, and firmly recommended to all.