Shield of Thunder continues the epic Troy Trilogy begun in Troy: Lord of the Silver Bow. Shield of Thunder was the last book completed by David Gemmell before his premature death in 2006, and was published posthumously. 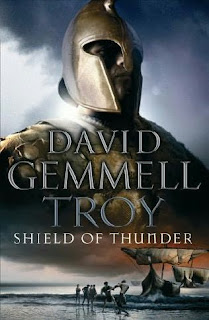 Rather than picking up the narrative immediately after Lord of the Silver Bow, Gemmell starts Shield of Thunder by focusing on Banokles and Kalliades, two of the Mykene soldiers sent to Troy by Agamemnon to murder King Priam. However, Priam spared their lives as an act of mercy in return for them slaying their treacherous commander. Agamemnon does not look well on failure and now the two Mykene soldiers are on the run. Their paths cross with Piria, a runaway priestess, and mighty Odysseus, whose path leads back to Troy. Back in the Golden City, we are soon reacquainted with the central characters from the first book, such as Andromache and Helikaon, and soon meet important new characters, most notably Achilles, the great hero of Thessaly, who burns to pit his skills of war against Hektor, Prince of Troy.

Shield of Thunder undercuts reader expectations nicely. We may be nearly two hundred pages in before the major characters from the first book reassert themselves, but Odysseus, Banokles and Kalliades are such great characters you barely notice. The writing is as tight as ever and there's much greater humour in the book, particularly the opening sections revolving around the mighty boar Ganny, whilst Banokles' refreshing lack of moral complexity makes him a particularly engaging character: someone who just works out what has to be done and does it whilst everyone else agonises with moral quandaries around him. However, this is the story of the tensions building to war. Gemmell undercuts reader expectations again and again. Paris and Helen are married quite legally and happily at the start of the book but Agamemnon exploits a legalistic loophole to allow him to challenge the might of Troy for her 'capture'. Menelaus, usually depicted as a fearsome warrior, is here a passive man much more at home on his farm than on the front lines. And Achilles and Hektor meeting in the arena prior to their infamous duel on the battlefield may strike some as sacrilege, but it builds up their distant rivalry and thirst to clash in battle all the more effectively.

Shield of Thunder (****½) is an excellent continuation of the story begun in Lord of the Silver Bow and sets things up for the grand finale in Fall of Kings. Shield of Thunder is publshed by Corgi in the UK and by Ballantine in the USA.
Posted by Adam Whitehead at 14:39

would enjoy seeing your take on some of the earlier Gemmell works. For me Gemmell is under-appreciated. It's not that he isn't appreciated - just that he deserves even more!