The Year of Our War by Steph Swainston + Richard Morgan snippet

Before I begin the review, I would just like to direct readers' attention to this early look at The Steel Remains by Richard Morgan. One of my 'Big Five' fantasy predictions for this year, it looks like the early excitement may be justified about the novel.

Anyway, on with business. Steph Swainston is the author of three books set in the Fourlands, a series she collectively calls The Castle Series. Two more are forthcoming. The Year of Our War is the story of Jant, the Messenger, one of fifty immortals who serve the Empire, a large nation covering most of a (fairly small) continent which is under threat of destruction from the Insects, a vast, endless horde that dominates the northern part of the landmass. Jant is a drug addict, but with good reason: the drug he takes, cat, transports him into the Shift, another world where some of the dead souls of his own world go, and where he has vital allies in the war against the Insects. 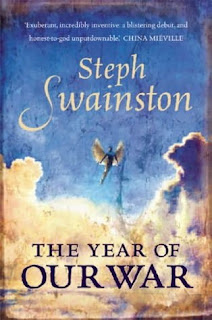 This is a pretty difficult book to review. Just when I was certain that I was going to end up hating it, the story would take off, the characters and the writing would click and I'd end up enjoying it. Then something else would happen and it would end up annoying me again. This pattern repeated itself throughout the book until it finally reached a highly ambiguous conclusion (there is no resolution, the book just stops with less of a climax than many of the standard chapter endings). To some extent it was a frustrating book, but I think its positives outweigh it problems.

The writing is quite interesting, with a sense of bright-eyed whimsy which is often at odds with the subject matter (drug abuse, a soldier getting his stomach torn out, a violent sex scene) in a manner not entirely removed from Jack Vance (although Swainston doesn't push it quite as far as Vance). The strange mixing of time and space in the book - this is a medieval world with T-shirts and jeans and added steampunk moments - is much more reminiscent of Mieville, which I get the impression is what Swainston was aiming for (and was successful, given her acknowledged place in the New Weird pantheon and Mieville's endorsement on the cover). The anachronisms and incongruities were initially rather jarring, but you rapidly get used to them and assume there is some kind of explanation for them.

The characters are all reasonably well developed, with the immortals coming across as a mix between superheroes, Greek legends and ordinary people in over their heads. Swainston crams a surprising amount of plot into the book's 360 pages, such as the tortured family history of Lightning, the Archer, and the machinations of Swallow, the musician-governess of Awndan, as she attempts to become immortal herself. These backstories give the characters weight and depth that informs their actions and doesn't feel incongruous, which is quite an achievement. Less successful is the attempt to give Jant himself development, with his flashbacks coming in disjointed scattershot, making it difficult to put together the pieces of his life and find out how he came to be who he is. Also, because Jant is exceptionally emo a lot of the time (being immortal , one of the fifty most important people in the world and the only person alive who can fly is extremely traumatic, obviously) and spends much of the book either urgently wanting a fix or going through cold turkey, he is a hard protagonist to like, which is a problem in a first-person narrative.

The climax also leaves much to be desired. This is very much the first part of a series and not a self-contained novel at all. As well as Jant's under-developed backstory, there are numerous storylines and characters left hanging in mid-air. I assume that these points are addressed in the sequel, No Present Like Time.

The Year of Our War (***) aspires to be different and certainly achieves that. Swainston is clearly a talented writer and I look forward to investigating her other work, but at the same time this debut novel is rough around the edges and the ending doesn't really justify the build-up.

The book is published by Gollancz in the UK and by Eos in the United States.
Posted by Adam Whitehead at 19:27

Email ThisBlogThis!Share to TwitterShare to FacebookShare to Pinterest
Labels: previews, richard morgan, steph swainston, the castle series, the year of our war