Alastair Reynolds' previous novels and novellas in his signature Revelation Space universe have been almost unanimously excellent works, but at times the reader (or this one, at any rate) can feel that there's a lot going on that they're not in the loop on. Characters appear whose significance is initially unclear and their backstories remain resolutely unexplained, although frequently alluded to, whilst the ending to Absolution Gap was rather abrupt, to say the least. Galactic North, a collection of eight short stories set in the universe, finally fills in the blanks and finally allows the reader to fully appreciate the breadth of this author's imagination. 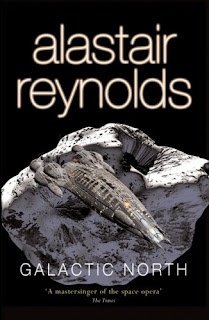 Things kick off with Great Wall of Mars. Two centuries from now, the cybernetically-altered Conjoiners have sealed themselves off inside a fortified region of Mars. The forces of humanity opposed to the Conjoiners, the Coalition, is planning a final all-out assault but have agreed to a last-ditch peace mission undertaken by Nevil Clavain and a Demarchist mediator, Sandra Voi. Needless to say, things go awry. Those familiar with the previous novels will have a big grin on their face as we meet characters such as Clavain, Galiana and Felka for the first time, and find out how they met and how they get out of the jam they find themselves in here.

Glacial picks up the story some decades later, as the Conjoiner refugees find themselves wandering from star to star at sub-lightspeeds searching for a new home. On an ice world they find a human habitation, one of the few successfully established by the USA's seedship programme, and evidence of a crime that took place many years earlier which Clavain dedicates himself to solving. Reynolds' skills at detective fiction (previously employed in Century Rain and Chasm City) are on full display here and the story is very well-told.

A Spy in Europa is a neat story of sabotage, revenge and severe hubris. It sets up one of the later stories in the collection and provides some background on the Demarchists, another of the major factions of the Revelation Space universe. The ending is absolutely stellar.

Weather is an absolute barnstormer of a story. Reynolds take on the difficulties of space combat carried out between ships maneuvering at hundreds of thousands of miles per second has always been superb, but gets its best demonstration in this story. We also get one of the biggest mysteries in the Revelation Space universe revealed in this story in a startling manner, but it's the somewhat tender relationship between the narrator and his Conjoiner charge which gives the story its heart.

Dialation Sleep is the oldest story in the collection and the style isn't quite as polished as Reynolds' later work, but it's still an intriguing story about love and the loss caused by years spent in interstellar travel.

Grafenwalder's Bestiary is a thoroughly twisted story that serves as a semi-sequel to both the novella Diamond Dogs (published seperately by Gollancz with Turqoise Days) and to the earlier story A Spy in Europa. It's an excellent story about a collector in search of the perfect creatures to put on display, but there are echoes of other authors and stories here, in particular George RR Martin's Haviland Tuf stories and his famous novella Sandkings, but the ending is brilliant, if horribly inevitable.

I thoroughly recommend not eating anything before reading Nightingale, a thoroughly sick and twisted story of genetic manipulation. The ending is horrendous, but there is no denying the macabre brilliance of the tale.

Galactic North gives the collection its name and the entire Revelation Space universe its spine. We start off in 2303 AD with a frantic attempt to repair a stricken starship before the story carries us forwards through centuries and then millennia as the war against the Inhibitors, the Melding Plague, the Pattern Jugglers and every other major event of the previous novels and stories plays out as the backdrop to a story of absolute obsession and we finally discover the nature of the new threat that emerged at the end of Absolution Gap. A spectacular story that rounds off the collection in style.

Galactic North (****½) is a superb collection of stories from one of our very best SF writers, and is thoroughly recommended to newcomers to Reynolds' work and veterens of his previous tales alike. It is published by Gollancz in the UK and will by released on 27 May by Ace Books in the USA.
Posted by Adam Whitehead at 13:45

Nice review, summing up all the things I loved about the collection. I still can't help but prefer his shorter stuff though, much more refined than the novels.