Albuquerque, New Mexico. Walter White is a former genius chemist who, for unclear reasons, dropped out of a high-paid salary in cutting-edge research and now works in a high school. He is married, has a disabled son and is expecting another baby, but is also overworked and underpaid, pulling shifts in a garage to make extra money. When he is diagnosed with advanced lung cancer, White realises he must take drastic action to make enough money for his family to survive when he is gone. 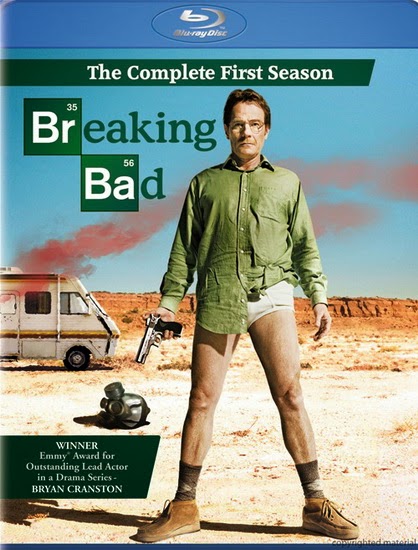 So, Breaking Bad. The most lauded TV show since The Wire, a critical darling and a smash popular success. Is it really as good as it made out? Potentially, although as of this time of writing I'm only a few episodes into the third season.

Unless you've been living under a rock (on Pluto), you've probably heard of the premise: underpaid government employee cooks meth with his drop-out ex-student to fund his own medical treatment and leave something behind for his family. It sounds goofy but Vince Gilligan's scripts and the powerful central performance by Bryan Cranston sell the idea completely. Things are helped by an array of talented supporting actors, from more established faces like Dean Norris and Anna Gunn to newcomer RJ Mitte, and a nice, firm grasp of tone. Gilligan and his co-writers create an offbeat-feeling world where they can switch from a dramatic, intense discussion of drug addiction to the black humour of what happens if you try to dissolve a human body with acid in a non-acid resistant bath (ignoring the fact that Myth Busters proved this wouldn't work, anyway). Breaking Bad has a heavy reputation for being about the collapse of the American family everyman into a selfish villain, but it also does goofy comedy quite well, without sabotaging the show's more serious side.

It's also a quite remarkably beautifully-filmed show. It intercuts traditionally-shot scenes on film with digital scene-setting shots of the New Mexico countryside and, in HD, these look amazing. The cinematography and lighting of the show puts many films to shame and gives it a real sense of place.

But at the core of the show in this first season is this idea that the capitalist ideal - the American Dream in the US - is a sham: you can work really hard, have great ideas, have a loving family and still end up with nothing, in debt up to your eyeballs and unable to provide for yourself, let alone anyone else. That isn't an excuse for White's subsequent headfirst dive into criminality, but it is a powerful motivation for a character driven by a remorseless sense of logic that wins out over morality or common sense. The show's unrelenting, unflinching exploration of that drive is highly compelling, if often uncomfortable to watch.

The first season of Breaking Bad (****½) is superbly written, immaculately focused, intensely acted, beautifully shot and quite impressively clever. It is let down only by a too-abrupt finale (a consequence of two more episodes being cut by the studio during the 2008 Writer's Strike) and some thinly-developed side characters (the purpose of Hank's wife is what again?). So far, it's living up to the hype. Season 1 is available now as part of the Breaking Bad Complete Collection in the UK (DVD, Blu-Ray) and USA (DVD, Blu-Ray). I highly recommend the Blu-Ray edition as it shows up the cinematography so much better in HD.
Posted by Adam Whitehead at 14:24

Excellent reviw as always! I often wondered about the role of Hank's wife in the beginning seasons as well. And I won't spoil anything but will say her role becomes evident later and atually vital in season 5.

You're just starting it NOW?! Well you're in for a great series. The last bit of this show (the final 16 episodes) is the best ending to a series I've seen in a long, long time...a long time.