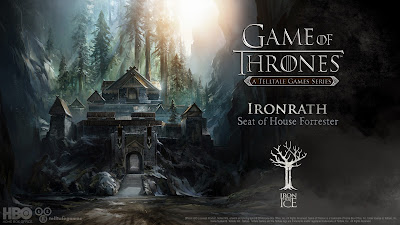 The first episode will be called Iron From Ice and will launch before the end of this year. There will be six episodes in total. Release dates have not been confirmed, but the game will take place simultaneously alongside the events of Season 4, beginning near the end of Season 3 and concluding around the time Season 5 starts. This may indicate a plan to have all six episodes out and done by the time Season 5 starts airing in late March or early April 2015.

The game will revolve around House Forrester, a relatively minor house based in the North. The Forresters are vassals of House Glover of Deepwood Motte, themselves vassals of the Starks. Their seat is Ironrath, located in the ironwood. This is a small part of the wolfswood, noted for its extremely tough trees which make for excellent houses and ships. The Forrester words are also "Iron From Ice". 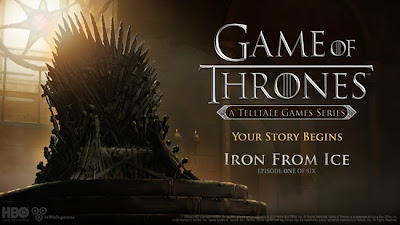 The Forresters are briefly mentioned in A Dance with Dragons. However, as the Telltale game is based on the TV canon rather than the novels, none of this information should be taken as being official for the books.

In terms of gameplay, the game will use five different POV characters, either members of the Forrester family or their servants. These characters will be located in both Westeros and Essos, and the locations they visit will range from Ironrath to the Wall and King's Landing. The storyline would appear to revolve around both the Forresters' involvement in the War of the Five Kings (presumably in which they support Robb Stark) and their rivalry with House Whitehill.

The game series will be available on PC, X-Box 360, X-Box One, PlayStation 3 and PlayStation 4.
Posted by Adam Whitehead at 19:55