The World of Ice and Fire is a companion volume to George R.R. Martin's Song of Ice and Fire novels, primarily written by Elio M. Garcia, Jr. and Linda Antonsson, the founders and administrators of the Westeros.org website who have also worked as continuity guides and fact-checkers for the last couple of novels in the series. Martin himself provides has written several sections of the book and provided vast reams of notes on other matters. The book is both a handy compendium of existing information from the novels, novellas, comics and websites and also a way of shining a light on many areas of both the backstory and world that otherwise would not have come to light. 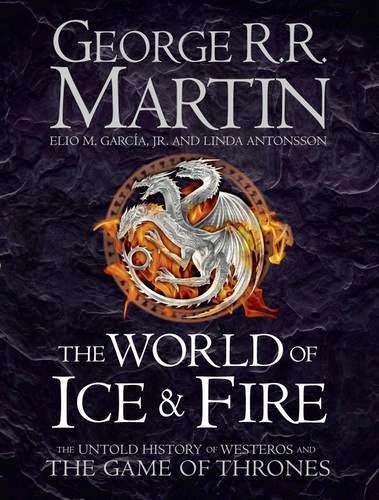 Let me get this out of the way to start with: I've been a moderator on Westeros.org since 2005 and been impatiently waiting for this book since it was announced seven years ago. I was pre-disposed to like it, and hope I can be fair in my appraisal of the book.

Companion guides to fantasy worlds have had a fairly mixed rep, with Terry Pratchett's various Discworld companions being excellent, Robert Jordan's Wheel of Time one being reasonable (atrocious art aside), Raymond Feist's being terrible and the various Tolkien ones being all over the place in quality. The World of Ice and Fire is definitely one of the better ones. The artwork is superb, the amount of new information for dedicated fans is almost overwhelming and the attempt to give the text an in-universe origin (a young maester writing a brief primer on the world for the notoriously impatient King Robert Baratheon) makes for a less dry reading experience than it might have been. There are negatives, some of them significant, but this is certainly required reading for a dedicated ASoIaF fan. Fans of the TV series will also likely find much to enjoy here, but it is not a given that the information in the book will also be canon for the TV show.

The book is divided into several sections. The first deals with the history of Westeros and Essos, initially focusing on the ancient history and mythology of the series before the arrival of Aegon the Conqueror. There is a very lengthy section dealing with the reigns of the Targaryen kings and the various challenges and conflicts they faced, ranging from a religious uprising to the devastating dynastic conflict known as the Dance of Dragons to several ill-fated attempts to invade Dorne to Robert Baratheon's rebellion that forms the immediate backstory to the novels. The rest of the book is dedicated to exploring the world itself, from the individual regions of Westeros to the Free Cities and very distant places like Sothoryos, Asshai and the Thousand Islands. The book's conceit is that the young Maester Yandel (Garcia and Antonsson) has written the book a sort of Rough Guide to Westeros and Essos, whilst drawing on material from Master Gyldayn (Martin). Gyldayn is regarded as more authoritative but excerpts from his work are rare, since they were destroyed in the fire at Summerhall. However, he does give us some of the more evocative moments in the book, such as his detailed account of Aegon's Conquest.

The general prose style is reasonable, although prone to repetition. It is not uncommon to see a phrase used and then re-used just a few paragraphs later. It is a common writing mistake, but it's unusual to see it happen quite so often in a book which had a much longer editing period than most. The other problem is that Yandel likes to cover almost every claim in the book with lengthy caveats. Things that happened long ago are unreliable because of the time that's passed and things that happened more recently are unreliable because different historians have different takes on the subject, informed by their biases and political leanings. Clearly Martin and his co-authors want to avoid nailing things down too decisively in case he changes his mind for future novels, and in the case of the ancient mythology and pre-history stuff that's understandable, but for more recent events it's a little more frustrating. We certainly still get a lot of new information - the Targaryen family tree alone swells to a huge size with the influx of new names and characters in this book - but how much of it is 100% reliable is left up in the air. However, the book does sometimes treat this with a nod and wink: by sometimes describing an event as mythological or untrue, but when combined with the reader's knowledge of the novels it becomes clearer what conclusions the reader is being directed to. 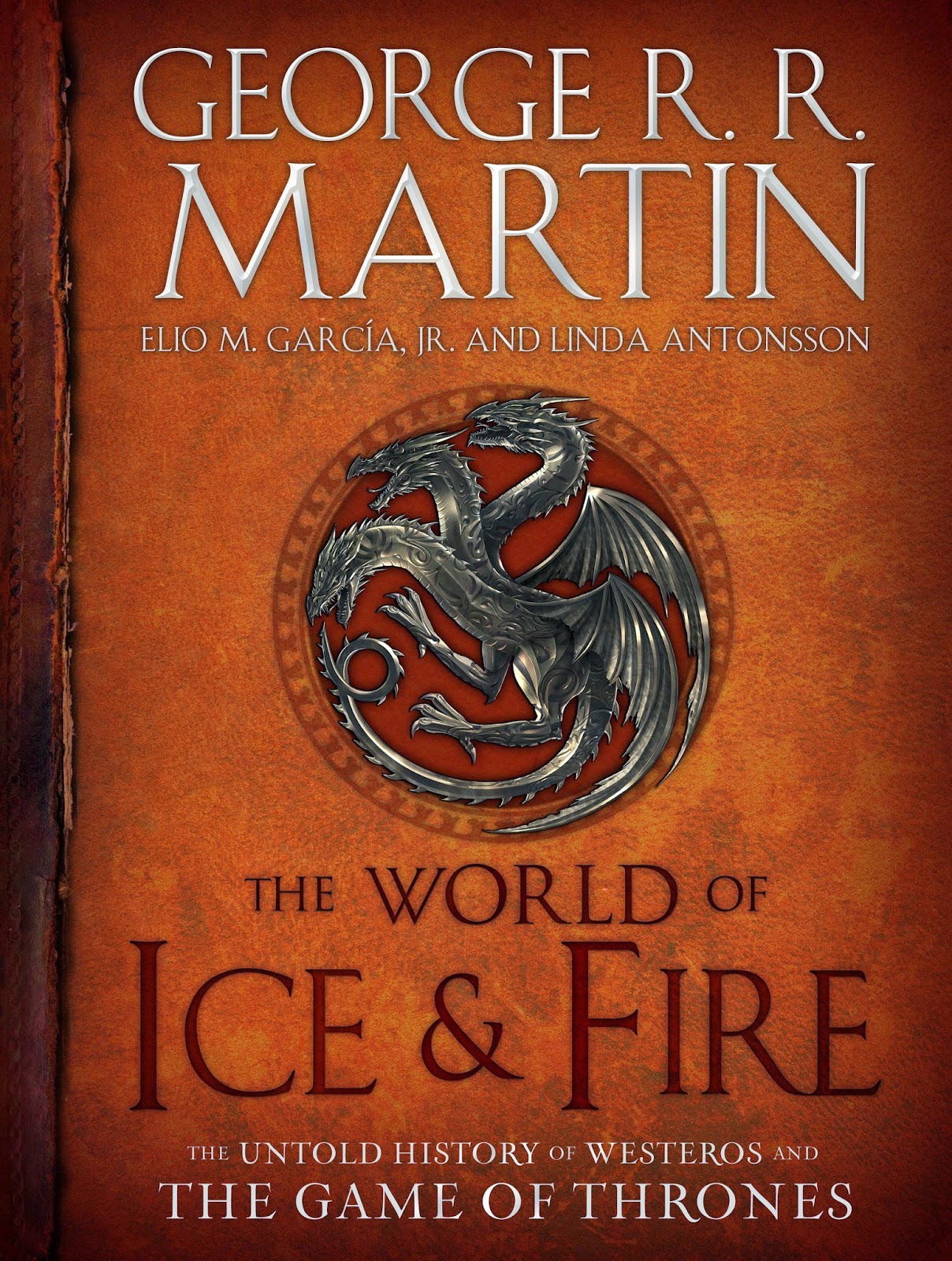 The artwork is of course superb, with Ted Nasmith's castle artwork being a highlight (particularly a depiction of the early, ramshackle King's Landing shortly after its founding and a later depiction of the capital in all its walled glory). The only weak part are the maps. Michael Gellatly's maps are pretty to look at, but are of limited utility. They have quite a few errors on them: Saltpans is shown as being part of both the Riverlands and the Vale, and the Riverlands is shown as extended past of Gods' Eye when the text indicated that their border is at the lake itself. The Inn at the Crossroads is also repeatedly shown as being south of the Trident in clear defiance of the text in the novels and every previous map of the setting printed to date. The errors mean that the primary new information shown on these maps - the borders of each region and their major exports - cannot be relied upon, which is a shame. It's also frustrating that the locations of many frequently-mentioned castles (like Raventree Hall) remain unconfirmed and major geographical features (like the Mander's massive tributary) remain unnamed. Minor quibbles? Certainly, but still irksome. More disappointing are the continued absences of maps for castles like Winterfell, Castle Black and Harrenhal, which feel years overdue at this point. There's also the fact that the in-book world map is almost bereft of any useful information and stops at Qarth, whilst many details are given on lands east of Qarth. A more cynical reviewer might suggest that the publishers want you to buy both this book and The Lands of Ice and Fire collection to complement one another.

There is also an issue with the disparity of information given on different regions. The North gets short shrift, which is quite surprising, whilst the longest region chapter is given to the ironborn. Whilst packed with new details and it certainly fleshes out one of the less-detailed regions of Westeros, the fact that we get more new information on the Greyjoys than the Starks or Lannisters seems a bit odd. Even this is then weirdly-presented: we get tons of new info on obscure internal ironborn conflicts from centuries ago, but only a couple of paragraphs on the Greyjoy Rebellion - a critical bit of backstory for the novels - itself. It is also very strange that various obscure parts of the world are fleshed out in sometimes remarkable detail (the new information on Yi Ti and its relationship with the island of Leng is surprisingly thorough) but Slaver's Bay and Qarth, major locations from the novels themselves, are completely glossed over.

Still, once you get used to the book's eccentricities, there is much to enjoy in The World of Ice and Fire (****). The detailed accounts of Maegor's cruel reign, the Dance of Dragons and Daeron's invasion of Dorne are engrossing and it's satisfying to finally get the chronology of Aegon's Conquest and the repeated invasions by the Blackfyre Pretenders all nailed down. Fan theories will receive a lot of new fuel from this book, from the claim that the seasons used to be normal before some event threw them out of balance (actually suggested by the original cover blurb to A Game of Thrones, but only finally presented in-world here) to the relationship between the Mad King and the Lannisters to the exact nature of the Long Night, the War for the Dawn and the Others. Yes, it's a book more for hardcore fans and in fact the exacting detail of it may be off-putting for casual fans more in the mood for a casual primer, but if you fall into that bracket this is essential reading. The book is available now in the UK and USA.
Posted by Adam Whitehead at 12:45

So it sounds, in the end, a very idiosyncratic history. I wonder if that was a *deliberate* choice in any way?

Definitely. I also think it's deliberate to an extent. Giving tons more info on the Starks, Lannisters, Arryns and other families that might be fleshed out in future novels (or Dunk and Egg stories) may have felt limiting or redundant, whilst GRRM may have felt that the Greyjoys aren't going to get much more development. Or it might be that the Greyjoys (and Martells, who get a lot more new stuff as well) started from having less info in the first place, so they wanted to bring them up to speed.

Seems like the appendices Tolkien allowed published from The Lord of the Rings...

It's pretty boring after a while. I don't recommend it.

The Tolkien ones are "all over the map" simply because there are so many - it is a very popular series. That's like saying "the quality of Star Wars guidebooks is variable"...well, yeah. Judging by the best, Fonstad's Atlas of Middle-earth is an amazing benchmark.

Fonstad's work is very impressive. It's sad she passed away a few years ago, I would have paid top money for an atlas in her style of Westeros/Essos, the Malazan world or WoT.

"The general prose style is reasonable, although prone to repetition. It is not uncommon to see a phrase used and then re-used just a few paragraphs later."

Kinda like you and your love affair with the word whilst, then? :P Sorry I like this blog been following for a couple years now but if you say whilst one more time I might have to leave lol

I always feel its dangerous to release these kind of companion books before the main series is finished. Now he cant change anything written in here if he should need to and Martin's not really known to be a great planer.

I was very disappointed... It was a total cop-out to use the 'young maester' author trick because now we can't say that anything in the book is definitively true and allows Martin to just ignore it if he wants to... In that case, what was the point besides yet another side-project cash grab when he should have been working on Winds of Winter...
Sorry to sound a little bitter but I am. I've been a reader/fan of this series since the first book was new and so have years and years of frustration and disappointment built up by now.