Isaac Asimov's Foundation series of SF novels has been optioned by HBO to develop into a TV series. Jonathan Nolan, the screenwriter of several big-budget movies alongside his director brother Christopher, is writing the project. 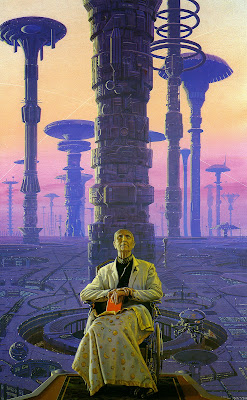 The novels are set roughly 22,000 years in the future and depict the end of the vast Galactic Empire, which is being torn apart by social and economic forces. Mathematician Hari Seldon has developed 'psychohistory', a statistical model which allows for the prediction of broad sweeps of future history based on underlying historical trends. Using this, he establishes the Foundation, a scientific think-tank and refuge located on the distant planet Terminus, which will guide humanity through the collapse of the Empire and the ensuring period of chaos and anarchy, shortening it from tens of millennia to maybe a thousand years. As the books continue, Asimov develops both the limitations of Seldon's model (the arising of a charismatic individual warlord is not accounted for by psychohistory, for example) and also ties in the mystery of the long-forgotten planet Earth. He also develops closer ties between the Foundation saga and his other major SF series, the Robots and Empire series.

Jonathan Nolan, the creator of the Person of Interest TV series and the co-writer of The Prestige, The Dark Knight, The Dark Knight Rises and Interstellar (directed by his brother), is working on the project which will be a co-production between HBO and Warner Brothers. The project was previously in development by Roland Emmerich at Sony, but HBO spent a substantial sum to pick up the rights.

This will be difficult project to adapt. The first three Foundation novels - the original Foundation Trilogy and counted by hardcore fans as the only books that count (later books were, by Asimov's own cheerful admission, written for the money) - were actually collections of short stories written by Asimov in the 1940s, and feature wafer-thin characters (and very few female characters of note), outdated science and a complete absence of any kind of sex at all. We can only assume that HBO will be changing some aspects of the story to make it work better on television. More complex is the fact that the first three books by themselves span over 200 years of history, with the series as a whole taking place over 500 years and ending with the ultimate fate and success of the Foundation unresolved. Finding a coherent structure or a regular cast of characters in this broad canvas will be challenging.
Posted by Adam Whitehead at 20:55

I hope they'll do a good job, like they did with Game of Thrones, because I love the Foundation series.

Foundation is going to be very very difficult to do. I wish them well but having read all the books, I would be very surprised if they managed to do it right.

Well, since it's HBO, they'll be sure to find a way to shoehorn naked women in there somewhere.

I think not trying would be a shame. If its done well, it may revitalise childrens imaginations as it did mine. I still have a 1952 hard cover of Foundation I found in Half Price books. It was in mint condition and ble and textures and padded and had the picture in this post on it. I only wish I could have met Asimov to get it signed. Bicentenial Man with Robin Williams was the closest and best atempt at recreation of his wrightings.