AD 2149. Ninety-seven years after a nuclear war devastated the Earth, more than two and a half thousand people live in refuge on an orbiting space station, the Ark. With life support beginning to fail, the ruling council of the Ark decides to see if Earth is survivable by sending down a hundred criminals. As adult criminals are executed to save food and air, this means sending down young delinquents. 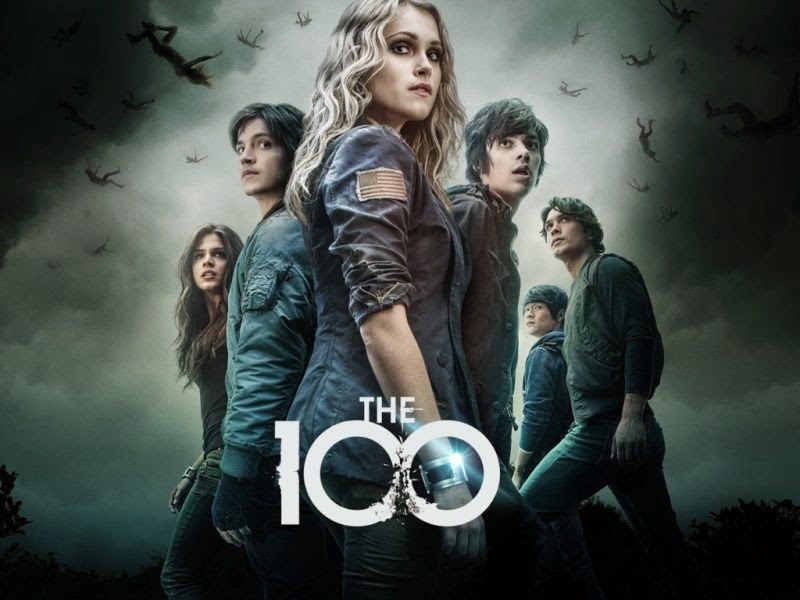 As the hundred exiles fight to survive on Earth - and later against the other survivors they discover living in the woods - the inhabitants of the Ark also fall into an internal power struggle as it becomes clear that the station cannot support them for much longer, and not everyone can survive to make it to the ground.

The 100 is a post-apocalyptic drama that seems to take great delight in its inspirations: the show comes across as the result of a collision between Battlestar Galactica, Lost, The Hunger Games and Fallout. The show adroitly fuses its inspirations in fun and original ways and ends up being a lot more entertaining than it has any right being, but it does take a little while to get there.

The show is the product of American network The CW, famed its glossy productions featuring preposterously photogenic young actors engaging in life-and-death struggles whilst also trying to straighten out their elaborately complicated love lives. The 100 somehow manages to turn this tendency up to 11: characters angst about their personal relationships almost at the same level they worry about starvation, dehydration, being impaled by spears and radiation sickness, all of which are constant and simultaneous threats. This would risk being silly, except for the odd hints that the writers are deliberately sending up this aspect of the network's shows. The series also gets away with it because it is also one of the most surprisingly brutal television shows on air. Game of Thrones and The Walking Dead have made shocking main character deaths more accepted on cable, but for a more youth-oriented series The 100 is startlingly bleak. We get population counts for both the exiles on the ground and the survivors on the Ark and both numbers drop at a rate of knots as the season progresses and the writers gleefully take an axe (or gun, or airlock, or plague, or in one highly memorable moment, a giant metal shuriken thing) to the cast.

The show gets off to a mixed start, being both unafraid to kill over apparently major players from the off but also unleashing some of the most ham-fisted, expositionary and clumsy writing you'll see on television all year. Characters initially come across as being very archetypal (or, if you're less kind, cliched as hell) and the actors initially seem unsure how to handle the material they are given. Henry Ian Cusick, in his first major TV role since playing Desmond on Lost, is both saddled with a dubious accent and some poor characterisation and can only respond by hamming it up for the first few weeks. Dialogue is poor and little reason is given for us to care about any of these characters. 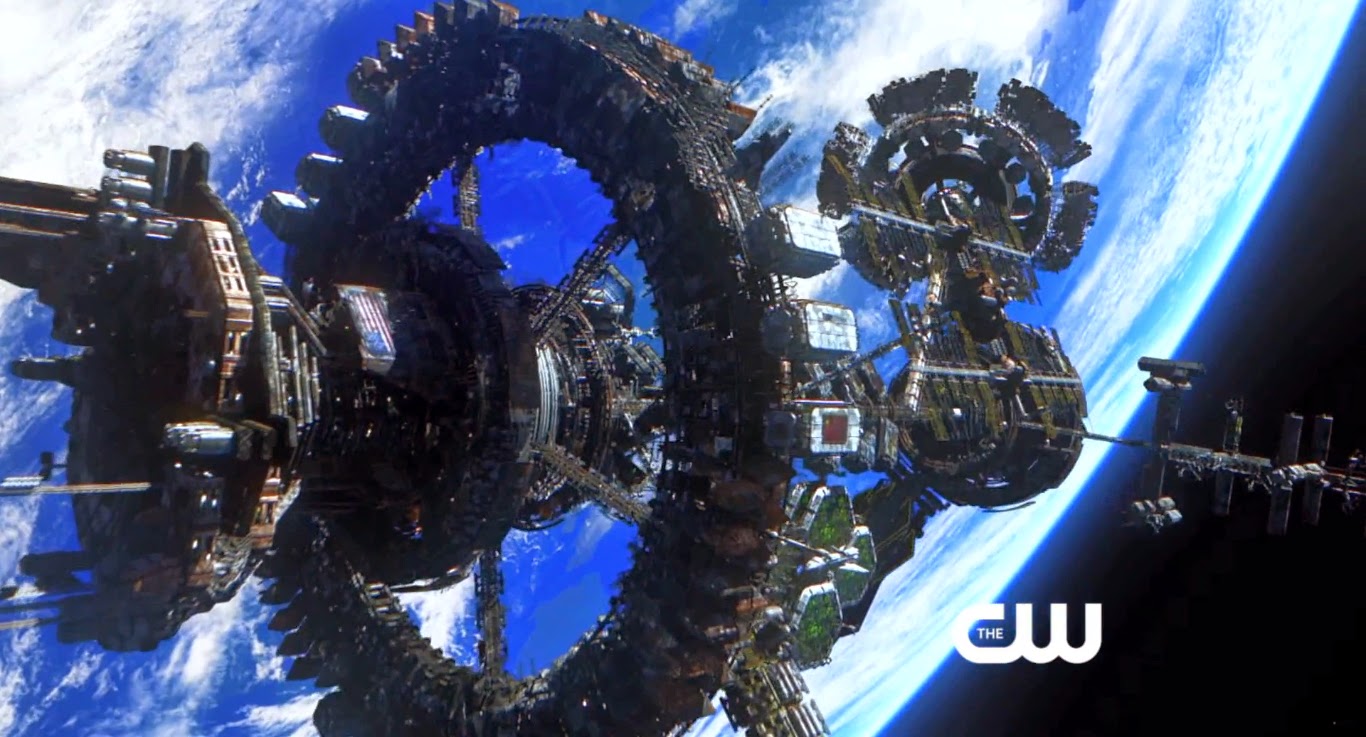 Fortunately, that changes and fairly quickly. By the sixth episode the writers have added a lot of ambiguity and (relative) complexity to the characters, the actors have much more layered material to work with and the show becomes a bit more experimental, not afraid to ditch half the cast for a week or two in favour of flashbacks to add depth and backstory. The writers also become quite good at creating internal conflict within the characters, giving them more to do than just stand around and look pretty.


This is helped by some fairly intense pacing. The series is uninterested in adopting a format and sticking with it, with shifts in factions, locations and motivations taking place on a near-weekly basis. The initial split between the ground and the space station is well-handled, despite it occasionally feeling like you're watching episodes of Lost and BSG that have been fan-spliced together (the presence of actors from both shows - particularly BSG - not helping). When our heroes on the ground find a mysterious hatch in the forest (albeit one that opens immediately and not after a tediously-drawn out 16-episode struggle) and characters in orbit wrestle with their consciences as they have to ration supplies and blast a traitor out of the airlock, The 100 feels like it is risking becoming a parody of those other series. However, the show then moves into other territory, becoming more confident and forging its own path. The season finale, which not so much changes the premise as drives a bulldozer through it and then burns down the remains, is the most game-changing cliffhanger in a series in recent times.

The actors are, for the most part, likable. The younger castmembers bring enthusiasm and gumption, although some are more experienced than others (Eliza Taylor did her time in the trenches of Australian daytime soap opera). More veteran actors are used to populate the Ark and, after that initial writing hurdle in the first few episodes, are great. However, the show's flirtation with killing off Chancellor Jaha gets a little old. Clearly they realised that Isaiah Washington is too good to off so easily, but it'd be better if they stopped putting him in near-death situations every other week. The weak spot is the handling of romance, which is trite. Octavia (Marie Avgeropoulos) and Lincoln (Ricky Whittle) fall in love without exchanging a word (although later on they do manage to earn it back), whilst the budding romance between Clarke (Taylor) and Finn (Thomas McDonell) is hamstrung by the utter lack of any chemistry at all between the two actors. Fortunately the writers seem to cotton onto this and use it to their advantage later on. As the season progresses there is also less time for teen stuff as the prospect of all-out war rears its head and some new, more enigmatic enemies enter the fray.

For its first season, The 100 (***½) starts off pretty poor but improves rapidly to become a solidly entertaining show. The writing starts out clumsy and the dialogue jarring, but it gets better. The characters become a lot more interesting and conflicted and the show gleefully subverts audience expectations at almost every turn. Certainly worth a look, especially as the second season so far has been a big improvement. The first season is available now in the UK (DVD, Blu-Ray) and USA (DVD, Blu-Ray).
Posted by Adam Whitehead at 22:10

Email ThisBlogThis!Share to TwitterShare to FacebookShare to Pinterest
Labels: cw, the 100, the 100 tv

Nice review! I agree with everything. I wasn't sure what to expect in the beginning of season 1 and almost gave it up. Now, I'm finding season 2 to be very interesting and the storylines have completely surprised me in a good way. The acting and dialogue seems to have improved as well.

Hi, you reviewed the first 6 Black Company books a couple of years ago, any chance of you reading and reviewing the last 4?

After reading the novels, I've been a bit curious about the TV adaptation. However, being seriously less than impressed by the novels, I'm half afraid to give the show a try. The books were alternately good and interesting and then ridiculously simplistic, with characters that largely had sparse motivation and little to add to the plot. I'll probably give the show a try eventually, but reading the source material didn't really do much to endear me to to the franchise.

There seems to be a general consensus that the TV show is much, much better than the books.

And yes, oddly I was thinking about the remaining Black Company books a while ago. They're fairly high up the list, as is continuing with Wild Cards and getting to a few of the non-series books on my pile.

When are you going to review seasons 4 and 5 of Fringe?

When I've watched them.

Thanks for the review,I will check this out!