Waterstones have tweeted something rather interesting and special: a letter written by George R.R. Martin to his agent, the late Ralph Vinccinanza, in October 1993 which contains an outline of A Song of Ice and Fire as then-envisioned.

Spoiler Warning: Although this outline deviates massively from the novels-as-published, it is possible there may be glimpses of future story elements here. There is certainly one confirmation which could be construed as major. Please do not read any further if you are really paranoid about spoilers. 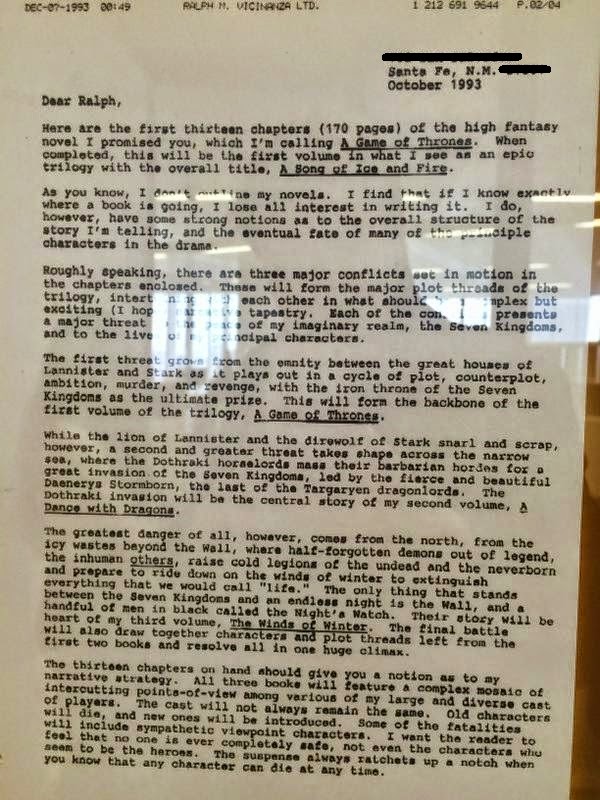 A note on chronology here. Martin started writing A Game of Thrones in the summer of 1991, when the scene with Bran attending Gared's execution and then finding the direwolves in the snow popped into the authors' head while he was working on an SF novel, Avalon. That chapter led into the second, with Catelyn greeting Eddard ino the godswood, and things snowballed from there until Martin had written over 100 manuscript pages. Progress was halted when the ABC network commissioned a pilot script Martin had written, entitled Doorways. Much of 1992 was spent rewriting the script and prepping, casting and filming the pilot. ABC decided to drop the project in 1993 and Martin returned home to Santa Fe. Normally, long interruptions in writing a novel meant that the idea would go cold, but Martin had instead spent a lot of his time working on the pilot also rolling over ideas for the fantasy story in his head.

By late 1993, as the letter indicates, two things had happened. The first was that his initial idea for a purely 'historical' series, merely set in a fictional world, had been abandoned. Martin's original idea had focused on the civil war storyline alone with no magic, Others or other supernatural elements (reminiscent of some of K.J. Parker's novels). Martin's friend Phyllis Eisenstein talked him out of this and convinced him to "put the dragons in". The letter firmly has the dragons and Others in place. The second was that the story had expanded from a single novel into a trilogy, consisting of A Game of Thrones (focusing on the war between the Starks and Lannisters), A Dance with Dragons (focusing on Daenerys Targaryen's invasion of Westeros) and The Winds of Winter (focusing on the Others and their assault on the realm). 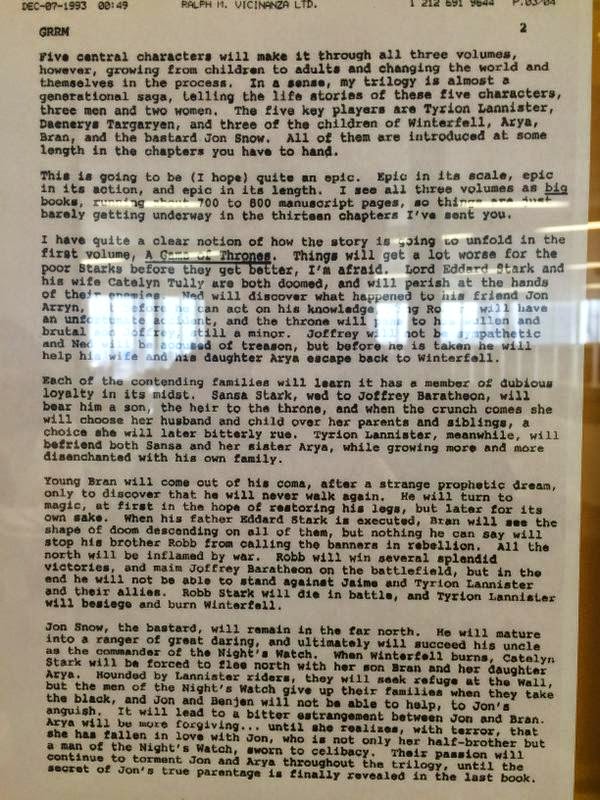 It's clear why Waterstones felt able to release the outline: it bears very little resemblance to the story we've ended up with. No R'hllor, no Stannis, no Renly, no Melisandre, no ironborn (the Lannisters instead sack Winterfell themselves) or Dornish, no Golden Company or Young Griff and no Slaver's Bay. The focus is overwhelmingly on the major characters from the first novel and remains on them throughout. The outline also seems to posit either the characters all being older at the start, or that the five-year gap is still in play: more likely the former, as GRRM later said that he came up with the five-year gap some way into writing the first three books, and of course abandoned it during the torturous writing of the fourth novel. Of course this is a brief outline, so many details are expected to be missing. It would be interesting to see if those original versions of those chapters are still around, and if characters like Theon are in them.

More interesting is that the Red Wedding is not present at all: Robb Stark dies on the battlefield, whilst Catelyn is killed by the Others beyond the Wall, having escorted Bran beyond. During the period when ASoIaF was a trilogy, Martin had said that he envisioned A Game of Thrones ending with the Red Wedding, but this outline seems to suggest that if was so, it was a passing notion during the brief period between the outline being written and the decision to split Thrones into two books (and later three). It's also clear that Martin massively complicated Daenerys's storyline by having her go to Qarth and Slaver's Bay. The outline shows Daenerys finding the dragon eggs in the wastelands beyond the Dothraki Sea and using them to rapidly conquer the Dothraki so she could lead them in an invasion of Westeros in the second novel. Speculatively, Martin introduced the Qarth and Slaver's Bay episodes to give Daenerys something to do when it became clear that the action in Westeros was vastly more involved, complicated and space-consuming than he'd originally planned. The complications between Jon, the wildlings, the Watch and Stannis would also appear to have served a similar function by giving Jon more story material to deal with during the civil war to the south. 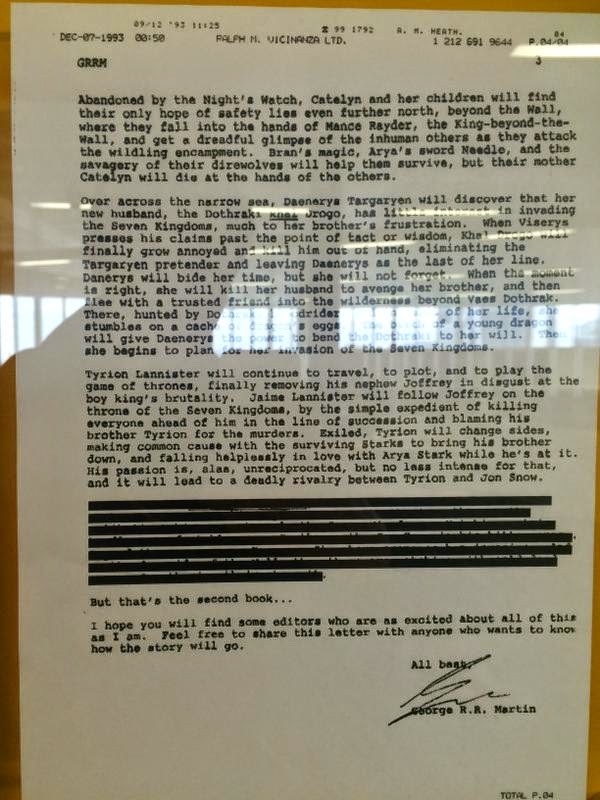 The outline is fascinating and also something of a relief: it's not very good, or at least, not as good as what we've ended up with. Some fans have suggested that writers should create an outline and stick to it without deviation, but in most cases this would be an appalling idea. The ASoIaF outline shows that, along with Robert Jordan's Wheel of Time outline (a very early version of which posited the Dark One as a human warlord from another planet and the Forsaken as half-demons) and J. Michael Strazynski's bonkers original arc for Babylon 5 (which lasted for ten seasons across two different series), refining and deviating from the arc when better ideas present themselves is often essential.

Can the outline be used to guage what happens in the next (final?) two novels? Maybe. Daenerys would seem to be about to meet/conquer the Dothraki with Drogon, so she's gotten back on track through a very circular route. But that was clear from the ending of A Dance with Dragons anyway. The Tyrion, Jaime, Sansa and Arya storylines have all gone in completely different directions as well.

Likely, there isn't much (if anything) left of this arc in the future books. But it's a fascinating look into the creative process and how ideas change over time.
Posted by Adam Whitehead at 00:35

Email ThisBlogThis!Share to TwitterShare to FacebookShare to Pinterest
Labels: a dance with dragons, a game of thrones, a song of ice and fire, george r.r. martin, the winds of winter

Is there something of a fairly big reveal in there? The bit about Jon and Arya's passion tormenting them "UNTIL JON'S TRUE PARENTAGE IS REVEALED?"

I know (a) this should be taken with a grain of salt overall and (b) the Jon/Arya thing is (thankfully) on the scrapheap... But I read this as pretty clearly implying that Ned isn't Jon's father (I mean, yes, pretty obvious... but to see it coming out in this form.)

Well, we find out who lives through the series (or at least until the last book). So there's that.

As much as what we have now is better in most respects, it would have been quite cool for Robb to have maimed Joffrey on the battlefield.

Against which we have to balance the fact that Sansa would be murdered by Jaime, I suppose.

Can't say anything here is much of a surprise. As soon he mentioned five characters that would live to the end I already guessed them all before reading the next part where they are explicitly listed.

And Jon's true parentage... was there ever any doubt at this point that he was not Ned's son? Still, cool to see the simple roots of where this crazy series all began.

Adds more credence to the Jon Snow isn't stabbed entirely to death by the Night Watch loyalists I suppose...

Jon is going to get "rezzed" by the Red Lady and get the flaming sword I thought Jon Lightbringer Snow?