Writing any kind of traditional plot summary for Mad Max: Fury Road is totally redundant, so I'll eschew my normal opening to cut to the chase. Should you go and see this film? Yes, it's awesome or, as I understand the kids phrase it these days, "'Da bomb," so there you go. Job done. Peace out. 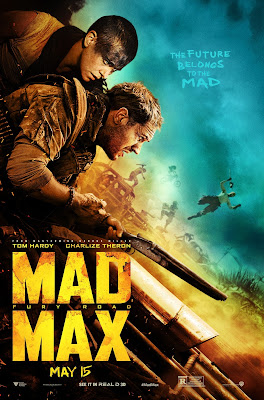 For a bit more of an analysis, I am late to the party here. By now, most reviewers have waxed lyrical on the film's explosions, car chases, feminist subtext, fight scenes, action sequences and Max's shockingly small number of lines (although shocking only in the context of someone who's never, ever seen a Mad Max movie), and these are all points that stand up to scrutiny. Fury Road is essentially a 100-minute-odd-long car chase as the forces of Immortan Joe try to recapture "breeders" (female slaves imprisoned for the purposes of procreation) liberated by Imperator Furiosa. "Mad" Max Rockatansky ends up helping out Furiosa by accident after getting randomly caught up in the whole mess. It's the modern action film stripped back and laid bare, and it's surprising how powerful this is. So many recent action movies have been straddled with incoherent, over-complicated storylines revolving around tedious magical maguffins and their plots have been filled with more holes than Swiss cheese. In fact, another recent Charlize Theron-starring CG blockbuster, Prometheus was nothing but a string of plot holes strung together with good performances and nostalgia for back when Ridley Scott was good.

Fury Road inverts this trend. The villain wants his captive women back (including Lenny Kravitz's daughter and Elvis Presley's granddaughter, because the film thrives on random awesome) and will drive his army of Viking-inspired, albino-skinhead truckers, bikers and flamethrower-wielding guitarists (yes, really) across dozens of miles of wasteland to achieve that end. Hilariously, every time you think, "This is kind of dumb," someone on-screen will also say, "This is kind of dumb," and a brief discussion will ensue about why it is not, in fact, dumb. In fact, at one stage Immortan Joe's accountant takes his boss aside and points out that the trip is ludicrously expensive considering they're a bunch of Viking albino skinhead truckers living in the desert with limited resources, and Joe actually takes his warning seriously. Whether such moments are convincing or not is another question, but this is a film that is a lot smarter than it looks, and it smartly keeps things simple and straightforward. 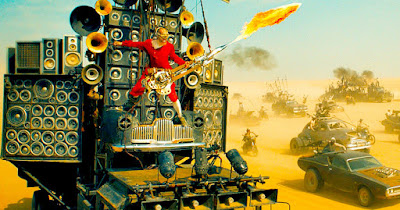 Simple doesn't mean shallow, though. For such a concentrated, intense story, the film has a surprisingly large cast, but all of them, even Immortan Joe's dumb-arse son (with the amazing name Rictus Erectus), have at least a few scenes establishing character and motivation. Riley Keough's Capable (the red-haired captive) has maybe a dozen lines in the film but she is nevertheless established as a strong and resourceful individual who is quick to learn the ways of fighting on the road. It's been said that Mad Max himself  - a taciturn performance by Tom Hardy - gets a little lost in the mix but this isn't really the case. He's present throughout, comes up with some important plans and ideas and is skilled and important in the fights. However, the film follows the convention of the earlier movies in that Max isn't invested in what's going on, being a drifter caught up in the madness and being the audience's viewpoint in what's happening. Max is the window through which we see the story, not the story himself, and that's the same as it was in at least the previous two films in the series. It's also interesting that the director keeps Max's most impressive solo moment of heroism and carnage off-screen, leaving what happened to the audience's imagination.

The centrepiece of the film is Charlize Theron's Furiosa. She gets most of the lines (although in a dialogue-spare picture, this isn't saying a huge amount), forms the emotional core of the film and is responsible for several of the movie's most awesome moments. That Theron (an Oscar-winner, lest we forget) is a fantastic actress is something audiences have taken for granted, but Fury Road reminds you exactly why. She combines steely resolve, bravery, pain (physical and emotional) and commanding charisma in what might be the most impressive female action lead since Ripley and (T2's) Sarah Connor. Apparently a Furiosa-centred spin-off is in the works and should be greenlit as soon as possible. 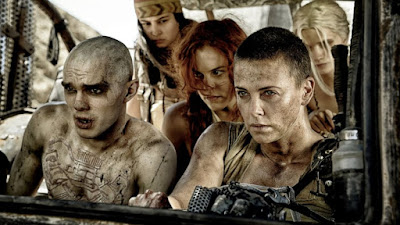 If this is the Memetic Femocalypse, bring it on.

Also worthy of note is Nicholas Hoult as Nux, a "War Boy" who reluctantly joins Team Furiosa after failing Joe one time too many. Hoult has been around for a few years, putting in solid performances in TV shows such as Skins and films such as the previous two X-Men flicks. But his unhinged, sympathetic performance in Fury Road as a kid dreaming of Valhalla and who has drawn smiley faces on his tumours to humanise them is dazzling. Expect to see his career level up after this movie as well.

Director George Miller spent fourteen years or so trying to get this film made and this allowed him to rewrite the script and storyboards so many times that everything was polished to a T. His direction is crisp and flowing, his action scenes crunchy and chaotic but fully understandable. The cinematography by John Seale (Cold Mountain and The English Patient, amongst many others) is jaw-dropping, with the film filled with iconic shots and epic panoramas. Expect to see a blizzard of memes and screenshots overrunning the internet once the film hits Blu-Ray. The soundtrack is appropriately bananas as well (remember: flamethrower guitars). The action sequences also benefit from mostly being done in-camera. The one 100% CGI sequence - a massive, towering sandstorm - is itself a brilliant set-piece, but for the most part Miller uses CG to combine and enhance landscapes and occasionally punch up explosions to give them a bit more oomph. Otherwise everything you see is actually being staged for real in the Namibian Desert, which gives the film a verve and heft other action films can only cry out for.

Mad Max: Fury Road (*****) is what happens when you cancel your director's previously-contracted movie and then you go a bit overboard with the severance package. It's the result of $150 million given to a director of talent and skill who knows exactly the right people to hire to turn his unhinged vision into a reality and never compromises on it. It's the most un-Hollywood Hollywood movie of the last decade. It's loud, violent and visceral, but also smart, restrained and respectably short. It is on general release now.
Posted by Adam Whitehead at 20:59

Can't argue with any of that. Not sure if it was a typo or not but there have been 3 previous Mad Max movies - Mad Max, Mad Max: The Road Warrior, Mad Max: Beyond Thunderdome. The original Mad Max was made on a ludicriously small budget by Miller in the late 70s and didn't really get released outside of Australia (where it became a cult hit). Definitely worth tracking down if you haven't seen it.

Yeah, that's a reference to the fact I pretty clearly remember 2 and 3, but not 1, which I think was a bit more about Max himself? I just re-ordered the trilogy so can catch up.

This review is factually correct but I'm left scratching my head about the conclusion. Yes, it's a 2 hour long car chase. Yes, it's completely dumb and absolutely nothing even pretends to start hinting about how it might possibly make sense. Yes, there are no holes in the plot -- because there is absolutely no trace of the plot.

All this is absolutely correct, I'm just flabbergasted that you still recommend seeing it nevertheless.