Talion is a ranger of Gondor, helping guard the Black Gate. When the orcs of Mordor retake the gate, they kill Talion's family...and Talion himself. Talion is then resurrected by a wrathful spirit, an elvish wraith who can remember nothing of his past but is determined to avenge himself on the Dark Lord of Mordor. 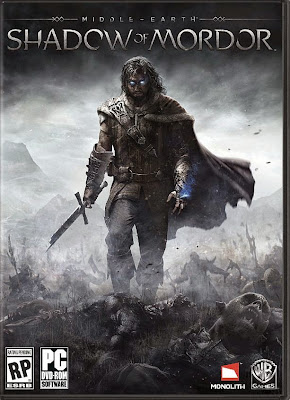 The history of Middle-earth video games has been patchy. Early text adventure The Hobbit was a classic of its genre and War in Middle-earth was a remarkable early example of a real-time strategy game. However, the Battle for Middle-earth series was highly inconsistent, and many of the tie-in action games with the movies were forgettable.

Monolith has produced something different with Shadows of Mordor. On the surface it's an action game borrowing a lot of ideas from other franchises. The game focuses on combat between Talion and a large number of opponents, relying on positioning, blocks, chains and special attacks to survive challenging fights. These mechanics are very similar to the Arkham series of Batman games. There's also an open world to explore with side-missions and towers you can rebuild to gain more intelligence on the surroundings, lifted pretty much straight from the Far Cry series. Although Talion is formidable in battle, he can be swamped easily in long fights so there is also a strong stealth focus similar to the Assassin's Creed games.

However, Shadows of Mordor rises above its influences to become more interesting than it first might appear. It helps that it was created by Monolith, a talented video game company responsible for some of the finest first-person shooters ever created: the FEAR and No-One Lives Forever series, the early and influential Blood games and the awesome (and sadly never resurrected) SHOGO: Mobile Armour Division, which mixed up the FPS and mecha-piloting genres fifteen years before Titanfall. Monolith handle the transition into third-person combat quite well and bring their formidable experience to the game in the form of visceral, solid and satisfying combat and a genuinely new and gamechanging mechanic: the Nemesis System.

Shadows of Mordor features a lot of orcs. An absolute ton of them, in fact. And they're not all mindless monsters. As the game progresses, the orcs gain experience and skill and climb up through their hierarchy of chiefs, captains and lieutenants, murdering and backstabbing one another as they try to gain personal power and influence. For the first third or so of the game, Talion's interaction with the orcs is limited to parting their heads from their shoulders. Later, thanks to his possessing elven wraith spirit, he gains the ability to magically take control of some of these orcs and swing them to his will. Apparently unwinnable fights can swing in Talion's favour by him reconnoitring enemy strongholds first and stealthily taking over multiple orcs. When the fight finally starts, he can unleash his own army of traitors. This becomes more complex when Talion starts taking control of lieutenants and captains, being able to arrange for them to turn on and betray their chiefs and putting Talion's own catspaws into positions of authority.

This system can be turned against Talion, however. An orc who "kills" Talion in combat (Talion is always resurrected thanks to the handy elvish wraith) gains experience and prestige, climbing the ranks and possibly displacing Talion's own minions. As the game progresses this interaction becomes quite elaborate, and Talion losing a single fight can push his entire web of alliances and betrayals out of synch. Adding a yet further layer of complication is that the orcs have different strengths and weaknesses: some are only vulnerable to fire or stealth and some are invulnerable to takedowns or finishing moves. You have to gain intelligence to find out an orc's weaknesses before either killing or enslaving him.

This results in a fascinating and - for a time - engrossing amd complex game of Orc Career Ladder Simulator, as you turn enemies against one another, sneakily arrange for massive Red Wedding-style orc betrayals and generally pull a lot of strings from behind the scenes. When your plans work you can't help but feel like a master manipulator. When they don't and you have to re-enslave half of Mordor's orcs just to bring down one annoying captain, massive frustration can result. 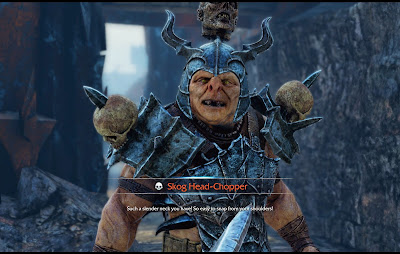 The Nemesis System is a genius idea, backed up by very solid combat, but after a while the game's other flaws come to the fore. The biggest problem is that this is an open-world game, but the world is tiny. There are two maps and both can be crossed from one side to the other in minutes. The spirit towers are so close you can almost jump between them and the massive number of orcs versus small number of locations results in multiple orc captains sharing the same strongholds. Ludonarrative dissonance (the clash between the game's narrative and actual gameplay) is a problem in most games, but, particularly in its second half, in Shadows of Mordor it becomes a near-constant problem. The maps should really have been four or five times their size to really sell the idea of Mordor as a vast, teeming network of competing orc clans.

The other problem is that the game prioritises planning, intrigue and betrayal but then relies way too much on luck. A simple stealth attack on an orc general might result in a fight against him and a dozen bodyguards, or three other captains might stumble on the fight halfway through resulting in what feels like the Battle of the Pelennor Fields, but with only one person fighting the orcs. This can also dramatically affect the game's length: I've seen people beating the main story in well under 20 hours but others constantly getting their plans thwarted and having to invest over 50. And the repetitiveness of the combat, the lack of variety in objectives and the tiny maps makes this a game that definitely needs to be shorter rather than longer.

There's also the storyline, which on the one hand embraces some of Tolkien's obscurer storylines (bringing in Celebrimbor, forger of the Rings of Power) and restraining the appearance of movie characters to basically one, lore-appropriate cameo (Gollum, although Sauron and Saruman have very brief appearances) but on the other embraces full-scale blood-letting and slaughter. Tolkien certainly wasn't above doing the gritty, dark stuff (more in The Silmarillion than the later books, it has to be said) but Shadows of Mordor wades through the grimness until it starts to get a little bit comical.

Shadows of Mordor (***½) is certainly one of the more interesting and smarter Middle-earth video games. The action is solid and the Nemesis System is engrossing (expect to see variations on it popping up everywhere soon). However, the maps are too small, the tone is far too grim and the game crosses the thin line between challenging and monitor-smashing frustration a few too many times. A sequel (which the game groan-inducingly teases in its final moments) with a bigger map and more variety could build on the systems here into something truly special, but for now Shadows of Mordor is a solid game with a genius central mechanic let down by some design problems elsewhere. Certainly worth a look. It is available now in the UK (PC, X-Box 360, X-Box One, PlayStation 3 and PlayStation 4) and USA (PC, X-Box 360, X-Box One, PlayStation 3 and PlayStation 4).
Posted by Adam Whitehead at 17:21

Email ThisBlogThis!Share to TwitterShare to FacebookShare to Pinterest
Labels: lord of the rings, middle-earth, monolith, shadows of mordor