The Sword of the North by Luke Scull

The city-state of Dorminia has fallen to the forces of the Lady of Thelassa. Early celebrations at the fall of one tyrant become muted as it becomes clear that the people have merely swapped one yoke for another, to the fury of Eremul the Halfmage. Meanwhile, Davarus Cole labours in a prison camp and dreams of escape, whilst Brodar Kayne, the Sword of the North, must cross a thousand miles of wilderness to reach his homeland in the High Fangs. 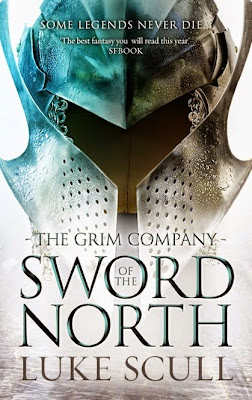 The Sword of the North is the follow-up to The Grim Company, one of 2013's more interesting fantasy debuts. It's the middle volume of a trilogy in the Abercrombie mould, with hard and brutal events offset by occasional knowing nods and winks about the silliness of the genre (and the odd Skyrim reference).

On the negative side, it is definitely the middle book of a trilogy and falls prey to many of the classic problems of such a volume. The story doesn't really begin or end, instead just rotating the characters through a series of intermediary plot points, some of which feel vital to the overall story and others feel like they exist solely because they are expected to in a fantasy trilogy. Brodar Kayne's story involves a whole lot of walking, Eremul's involves a whole load of fairly unsatisfying politics and Davarus's involves a whole load of hanging out in a prison camp. As middle books of trilogies go, this is definitely one of the more standard.

The author, at least, recognises this and gives the book a more cohesive shape with the arrival of some new players, some substantial expansion of the backstory and a nice recurring flashback to Kayne's earlier life, which gives the novel a much-needed dramatic spine and sense of direction. There's nothing too excitingly original in these sections, but Scull's solid skills with action scenes and reasonable characterisation keep things ticking over nicely.

The Sword of the North (***½) is a reasonable successor to The Grim Company, although it lacks some of the more compelling storyline and character moments of the original novel. It sets things up nicely for the finale, but it suffers a bit too much from "middle book syndrome" to truly shine. But if you enjoyed The Grim Company, this follow-up should satisfy. The book is available now in the UK and USA.
Posted by Adam Whitehead at 18:23

Email ThisBlogThis!Share to TwitterShare to FacebookShare to Pinterest
Labels: luke scull, the grim company, the sword of the north