Amazon Prime have (possibly inadvertently) revealed the title of the seventh and penultimate episode of the first season of The Wheel of Time. The episode will be called The Dark Along the Ways.

Update: in another inadvertent slip (spotted by WotSeries), the season finale has now been confirmed to be called The Eye of the World, the same title as the first book in the series. 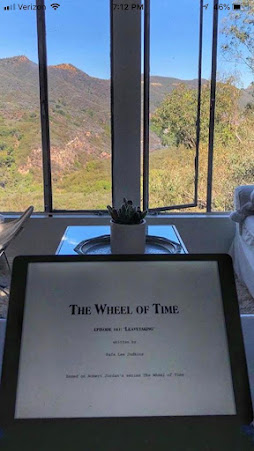 The current schedule for Season 1 is as follows:

Season 1 of the show draws almost entirely on the first novel in the series, The Eye of the World, for source material. Some characters from prequel novel New Spring also appear, and some characters from The Great Hunt appear early (such as Liandrin, Alanna and Siuan Sanche), whilst other characters from Book 1 have been delayed to Season 2 (most notably Elayne Trakand).

Some fans have been confused by the show's use of episode titles, which draw on book chapter titles. However, rather than using chapter titles from just the first novel in chronological order, the production is using chapters from all over the place, making some fans think the show is adapting way more material at a faster rate than it really is. For example, Leavetakings is a chapter title from Book 1 (Chapter 10), Book 2 (Chapter 9), Book 4 (Chapter 16) and Book 5 (Chapter 48), whilst Blood Calls Blood is Chapter 7 of Book 2, and A Taste of Solitude, the first episode of Season 2, comes form Chapter 18 of Book 6!