Warner Brothers has put the Dan Simmons SF novel Hyperion into development as a feature film, with Bradley Cooper helming the project for his own production company as executive producer. So far, Cooper has not committed to starring in the project. 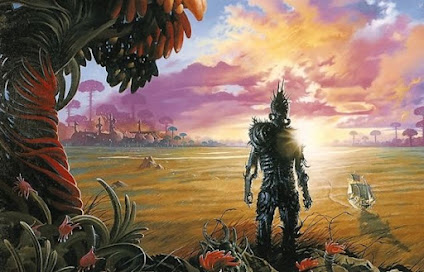 Originally published in 1989, Hyperion is an SF novel inspired by Geoffrey Chaucer's Canterbury Tales. Set in the 28th Century with a war brewing between the Hegemony of Man and the Ousters, a nomadic race of humans living in arkships, seven individuals are summoned to the remote world of Hyperion. Hyperion is infamously home to the Shrike, a godlike entity who roams the planet, killing people for unknown reasons or hanging their still-living forms on a giant mechanical tree. The seven pilgrims each relate their story and interest in the Shrike on their journey. The story continues in The Fall of Hyperion (1990), Endymion (1996) and The Rise of Endymion (1997), though the latter two novels are generally considered inferior to the first two.
Bradley Cooper has long been a fan of the novel, having planned to direct it himself in 2011 before developing it with SyFy as a mini-series in 2015. Cooper's commitment to the project in 2011, when he was best-known for the Hangover series of comedy films, felt somewhat random. However, since then he has expanded his repertoire by writing, directing and starring in the acclaimed remake of A Star is Born (2018) and producing Joker (2019), considerably enhancing his Hollywood credentials.
For their part, Warner Brothers might have been intrigued by the novel's blanket critical acclaim since release, its well-realised SF universe and its three sequels giving it serious franchise potential, whilst its unusual structure and artistic credibility might make it a fitting thematic follow-up to their Dune project with Denis Villeneuve (the second part of which was greenlit last week).
The film hasn't been fully greenlit yet, though, with Warner Brothers now searching for a director to bring the project to the screen; intriguingly, Cooper hasn't chosen it as the follow-up to A Star is Born, perhaps preferring someone with greater vfx experience.
Posted by Adam Whitehead at 20:53

I was going to say the episodic nature of Hyperion is ideal for TV, but then I thought about the foundation trilogy being likewise and that didn't seem to be considered a plus for the current TV series.

Dan Simmon's website is gone now, used to hang there occasionally chatting with people. I remember him ripping Bradley Cooper a few years ago about having the rights and never doing anything with them. Considering Dan's had one project make it to the screen I'd say he owes Cooper an apology, not bad having an a-list director/producer/movie star consider your book a lifelong passion project. I agree that the success of Dune helps, you could say up front that you're making 2 or 3 movies out of the first book or 2. Would be incredible if Cooper decided to direct this himself, would take giant balls, dying for that to happen. A Star is Born proved him as an A-list auteur director.