Paramount pulls STAR TREK: DISCOVERY from international Netflix days ahead of Season 4 premiere, will not air now until 2022

In a surprise move that will infuriate fans and customers, Paramount have terminated their licencing agreement with Netflix for Star Trek: Discovery with immediate effect. The series will depart all international markets on which it aired previously at midnight tonight (fifty minutes from this time of writing*), including the UK, Ireland and most mainland European countries. 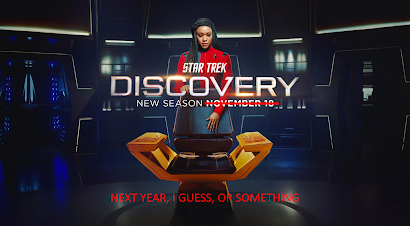 The startling move comes because Paramount are planning to launch their streaming service Paramount+ internationally in the Spring, and they see their Star Trek original series as a key appeal for the service, as it is has become in the United States. This means it is likely that the series that currently air on Amazon Prime - Lower Decks and Picard - will also depart that platform in the coming months, depending on the timing of their contracts. The latest series, Star Trek: Prodigy, has not aired at all outside of the US and Canada (where Paramount/CBS has a long-standing deal with the CTV Sci-Fi Channel and Crave streaming service).

It is unclear what the fate will be of the Star Trek legacy series: The Original Series, The Next Generation, Deep Space Nine, Voyager and Enterprise have all streamed on Netflix for the past five years under a high-price-tag deal between Netflix and CBS (prior to their reunification with Paramount). The smart money will be these shows also leaving once the Netflix contract expires.

In the UK, at least, Paramount+ will only be available through a Sky or NowTV subscription, which is already significantly more expensive than most streaming options. An extra premium would then be paid on top for the Paramount+ shows. Some estimates place the cheapest package to get access to the Paramount+ shows at £25 a month, more then twice the price of a monthly Netflix subscription and five times that of an Apple+ subscription. This will be a formidable barrier to entry compared to the current, excellent-value Netflix deal.

Pulling this move just three days ahead of the launch of Season 4 of Star Trek: Discovery, which fans assumed they'd be able to watch on Friday as normal, is particularly galling, and I would not be surprised to see widespread piracy as a result.

* Update: as of 00:05, Discovery remains on Netflix UK, so it might be tomorrow it is pulled instead.

Going by the press release on the sky site it looks like it will be available as a separate app too.

Just above the about paramount+ section.

Discovery does seem to have disappeared from UK Netflix now. At least, it wasn't showing up when I searched for it over lunch.

Do you know whether this is also going to affect Picard on Amazon Prime?

It's such a slap in the face, and leaving it so late to break the news is just so horrible. Even the show's actors had been promoting the show in the UK and talking about how it was coming this month.

Discovery is no longer on Netflix NZ and no warning given at all.