PLANESCAPE to return in 2023

Wizards of the Coast have confirmed that the classic, highly-acclaimed Dungeons & Dragons campaign setting Planescape will return in 2023, with a new campaign setting, monster guide and adventure. 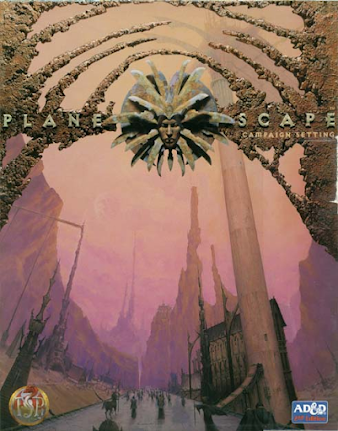 Planescape was launched in 1994 and was an attempted to revive the classic Dungeons & Dragons 1st Edition Manual of the Planes (1987) for the 2nd Edition of the game. A design team led by Dave "Zeb" Cook reworked the D&D cosmology and planes of existence to create an entire campaign setting, as well as adding the city of Sigil at the heart of the planes as a base of operations for players to use. The campaign was particularly acclaimed for its incredible artwork by Tony DiTerlizzi (based on Dana Knutson's concept art) and its moody setting, with an unusual focus on roleplaying, negotiations and how to interact with different factions. Combat was downplayed in favour of ideology and arguments. The setting was unusual in that it was clearly influenced by contemporary fantasy like Sandman and the Vampire: The Masquerade roleplaying game, rather than epic fantasy.

Planescape's biggest contribution to the D&D mythos, apart from Sigil, is the tiefling species, which has gone on to become one of the most popular D&D races.

In 1999, after the setting itself had been retired, the video game Planescape: Torment was launched and became possibly the single most acclaimed CRPG of all time. A remastered version of the game, Planescape: Torment Enhanced Edition, was released in 2017.

Although Planescape was retired as an active campaign setting in 1998, the idea of adventuring in the planes was revisited in the Dungeons & Dragons sourcebooks Manual of the Planes for 3rd Edition (2001) and 4th Edition (2008), as well as in several sourcebooks for the current 5th Edition of the game.

Planescape's relaunch will take place in late 2023 and will use the model pioneered by the revised Spelljammer setting, which hits retail next month. The setting will consist of a setting guide, a bestiary focusing on new monsters and an adventure. The new setting will return to the original roots by focusing on Sigil, the City of Doors (a city shaped like a giant ring) as a base of operations for adventures, as well as the fifteen factions of the city and its enigmatic, indestructible ruler, the Lady of Pain.

Although Planescape's return had been teased for a while, some fans were betting on a return for Dark Sun sooner, given more references had been made to Dark Sun in the new Spelljammer material. From the sound of it, fans of D&D's take on Mad Max will have to wait at least another year.

As well as Spelljammer, Wizards of the Coast is resurrecting Dragonlance in December with a new campaign book, Shadow of the Dragon Queen, and a tie-in board game, Warriors of Krynn. They are also revising Forgotten Realms with a new campaign setting book in 2023, focusing on the region surrounding Phandelver. Realms fans will continue to be disappointed by the lack of a full, proper sourcebook like the legendary 2001 one for D&D 3rd Edition.

Wizards of the Coast have also confirmed that the 5th Edition of D&D itself is getting a makeover with a new version of the game to launch in 2024. This version will be called "One D&D", but fans will no doubt just refer to it as 5.5 Edition. It will be the first major revision of the game rules since 2014, but Wizards of the Coast promise that it will be 100% compatible with the existing rules. 2024 will also mark the 50th Anniversary of Dungeons & Dragons.