News has sadly broken that German director Wolfgang Petersen has passed away at the age of 81. Petersen with best-known for his WWII submarine movie Das Boot (1981), but also directed several works of genre interest: The NeverEnding Story (1984), Enemy Mine (1985), Outbreak (1995) and Troy (2004). 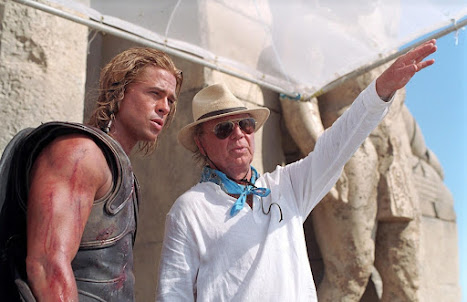 Petersen was born in Hanover in 1941 and grew up with a keen interest in directing, fuelled by a love of the American movies that flooded West Germany in the wake of WWII. He started directing plays in the 1960s and became interested in the medium of television. He worked on the TV series Tatort (aka Crime Scene) in the early 1970s, forming a good working relationship with actor Jürgen Prochnow, with whom he'd collaborate on several projects. His first feature film project was The One or the Other of Us, released in 1974.

Petersen attracted international attention for Das Boot (1981), his film about a German U-boat commander (played by Prochnow) at the height of WWII. Although shot as a movie, Petersen's economical shooting meant he was able to film much more material than was needed for the film. This resulted in the 149-minute theatrical cut, a 300-minute TV series (released as both a six-part miniseries and a series of three TV movies) and a 209-minute "long film" cut which combined the best elements of both, often called Das Boot: The Director's Cut and released in 1997.

The movie attracted international acclaim, including six Academy Award nominations, and launched the international careers of both Petersen and Prochnow (who subsequently played Duke Leto Atreides in David Lynch's 1984 film version of Dune). The film is widely regarded as the single finest submarine movie ever made.

Petersen directed the enormously successful The NeverEnding Story (1984), based on Michael Ende's fantasy novel of the same name. The film was the most expensive movie ever mounted outside the United States or Soviet Union (at the time), and seen as a risk because Michael Ende's novels were not well-known outside Germany. However, the film was shot in English and had impressive visual effects for the time. The film did very well and was critically well-received, but Michael Ende was deeply unhappy with the adaptation and was unwilling to discuss further adaptations of his work, resulting in no sequel being made. Ende's dissatisfaction also meant a mooted remake in the early 2010s was shot down. The film recently re-entered the public eye after its theme tune played a key role in the Season 3 finale of Stranger Things.

These successes led Petersen to shoot Enemy Mine (1985), a space opera movie featuring marooned human and alien soldiers whose worlds are at war who are forced to work together to survive. The film is often cited as an unofficial remake of the WWII movie Hell in the Pacific (1968), which has a similar plot. The film was not initially successful, but has since developed a cult following.

Petersen directed Shattered (1991) and then returned to major success with the Clint Eastwood political thriller In the Line of Fire (1993), the pandemic disaster movie Outbreak (1995), the Harrison Ford action thriller Air Force One (1997) and nautical disaster movie The Perfect Storm (2000).

In 2004 Petersen directed his most expensive movie, Troy, a large-scale epic about the Trojan War starring Brad Pitt, Sean Bean, Peter O'Toole, Brendan Gleeson, Diane Kruger, Orlando Bloom and Eric Bana. The movie had a mixed critical reception but was a box office success. A sequel, focusing on Sean Bean's Odysseus and loosely adapting The Odyssey, was considered for a while but was not made. For my money, this is an underrated movie which has excellent action sequences and an impressive scale, although the dialogue is a mixed bag and the film needed a more charismatic actor playing Paris.

Petersen rounded off his Hollywood career with a remake of The Poseidon Adventure, just called Poseidon, in 2006. However, the film was a box office bomb and attracted poor reviews. Petersen made one more film, a 2016 heist comedy called Vier gegen die Bank which was his first German-language film since Das Boot.

Petersen passed away on 12 August 2022 from pancreatic cancer. A versatile director with a keen eye for both spectacle and human drama, he will be missed.

The big misunderstanding for "Troy" is the theatrical cut. You need to watch the Director's Cut, it's better by leaps and bounds. Same story as with "Kingdom of Heaven".