1916. English sorcerer Roderick Burgess, distraught over the death of his son at Gallipoli, seeks to bind and imprison Death itself. His plan misfires and instead he captures Dream. Dream is unable to give Burgess what he wants, and eventually Burgess leaves him to rot in a glass prison in his cellar. During Dream's absence, his realm, the Dreaming, falls into disrepair and many dreams and nightmares escape into the world of the living. Some people also fall into a permanent sleep, a sleeping sickness that lasts decades and claims thousands. Eventually Dream escapes, and finds he must return his realm to order and reclaim the dreams and nightmares...even those who are prepared to do anything to retain their liberty. 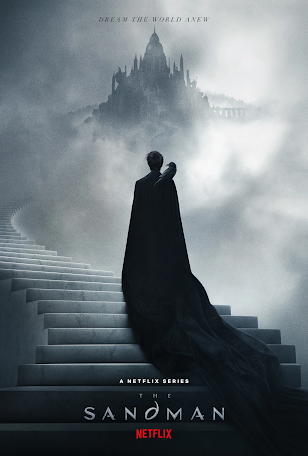 Adapting The Sandman for the screen is a Herculean task. Neil Gaiman's 76-issue comic series ran from 1988 to 1996 and was collected as ten dense graphic novels, telling stories spanning thousands of years and involving a cast running into the hundreds. At the centre of it all is Dream or Morpheus, a non-human anthropomorphic personification of the concept of dreams. In many issues Dream doesn't even show up, or only has a brief cameo. The series alternates between epic story arcs and self-contained fables, and the tone can spin on a dime from comedy to tragedy to outright horror to fantasy to historical drama. Very minor moments in earlier issues can have massive ramifications fifty issues later.

There is also the legacy that Sandman has accrued. The series occupies a space in comics similar to what The Lord of the Rings does in fantasy novels, a dominant force whose sheer name value and beloved following makes tackling an adaptation a humbling and challenging task. Fortunately, at least in this case the original creator was on hand to help tackle the adaptation and guide it to the screen.

Netflix's The Sandman is an unabashed triumph, something that is a relief to say after so many recent streaming adaptations of beloved fantasy works were underwhelming, if not outright terrible. The one-two punch in recent weeks of Sandman and Amazon's splendid tackling of Brian K. Vaughan's Paper Girls may make one wonder if streaming services are turning a corner and are now producing better adaptations, but I suspect we will continue to see variable results moving forwards.

The Sandman works because it combines a talented cast of actors, directors, vfx personnel and behind the scenes crew with excellent judgement over how to develop the source material. Some episodes are lifted from issues of the comic almost verbatim, with Gaiman's almost-thirty-five-year-old material still feeling as fresh and engrossing as when it was originally committed to paper. Other episodes see the source material reimagined or tackled in a different way due to practical concerns, or cost, or not having the rights to certain characters or ideas, and in every case the judgement is sound.

The first season of the TV series adapts the first two graphic novels in the series, Preludes and Nocturnes and The Doll's House, constituting the first sixteen issues of the comic. In the former story arc, Dream is imprisoned, escapes and sets about repairing the Dreaming and recovering three of the symbols of office (a ruby, a bag of sand and a helmet), which involves confronting a murderous killer, tracking down a demon-hunter in contemporary London and descending into Hell itself for a tense audience with Lucifer. In the latter, Dream sets out to recover three missing inhabitants of the Dreaming who escaped during his imprisonment, as well as investigating the appearance of a "dream vortex" which threatens the fabric of reality.

The adaptation collapses these two stories into ten episodes (some of them surprisingly short by modern standards) and overlaps them a little bit more than in the comics, positing the Corinthian (a brilliant Boyd Holbrook) as more of an antagonist for the entire season. The result is a compelling pace, with excellently-crafted cliffhangers demanding you watch just one more episode. This is enhanced by brilliant casting: Tom Sturridge has a hard job playing the taciturn, oft-emotionless Dream, but he manages the impossible by nailing Dream's implacability but also giving him brief bursts of humour and charisma. Vivienne Acheampong is outstanding as the fussy librarian Lucienne, who keeps the Dreaming ticking over in Dream's absence, and Kyo Ra is superb as Rose Walker, the closest thing we have a to a "regular human" lead in the story.

Other actors appear just for one episode or so, but are fantastic: David Thewliss is chilling as John Dee, Jenna Coleman is suitably bedrazzled as walking human dumpster fire Johanna Constantine (a rights-enforced gender flip of John "Hellblazer" Constantine) and Gwendoline Christie is fire and ice personified as Lucifer Morningstar. Ferdinand Kingsley is also outstanding as Hob Gadling, an ordinary human whom is gifted immortality by the Endless on a whim to see how he handles it, and Kirby Howell-Baptiste imbues Death with the whimsy, humour, wisdom and depth of her comics counterpart.

Contained within the first season was the tricky mandate to adapt three of the greatest individual issues of comics ever published into live-action: "Twenty-Four Hours" (here realised as episode five, 24/7), "The Sound of Her Wings" and "Men of Good Fortune" (here combined into episode six, The Sound of Her Wings). "Twenty-Four Hours" had to be changed a fair bit, due to the absence of a narrating figure and limits on the amount of horror even Netflix can put on screen, but the end result is still fascinating (and horrific). But The Sound of Her Wings is flawless, taking the two vaguely related stories from the comic (the first in which Dream spends a day watching his sister, Death, at work, and the second in which Dream spends one day every 100 years meeting Hob Gadling, who may or may not be a friend) and combining them into a beautiful hour of drama.

Flaws are almost non-existent: Mervyn Pumpkinead's CGI feels a bit stiff compared to the flawless vfx elsewhere, and the utterly brilliant end credits (which vary from episode to episode) barely have a chance to start before Netflix forces them off the screen for the next episode. And that's really about it.

The first season (*****) builds to a suitably epic conclusion, with quiet moments that readers of the comics know will have a seismic impact further down the road, but ultimately leaves the viewer shocked that the team have managed the impossible: they have taken The Sandman and made a superb television series out of it. The hope now is that they can continue.

The first season of The Sandman is available to watch on Netflix worldwide right now and I recommend you avail yourself of the opportunity to catch up on it as soon as possible.

Thank you for reading The Wertzone. To help me provide better content, please consider contributing to my Patreon page and other funding methods.
Posted by Adam Whitehead at 15:22

The Sound of Her Wings is one of the most moving episodes of TV that I've ever seen. It should be a shoe-in for an Emmy.