Where to Start with...The Sandman?

The Sandman has been a massive hit for Netflix and sales of the graphic novels have gone through the roof. However, if you're an eager new fan waiting to get in on the phenomenon, where do you start? The graphic novels have so many instalments, spin-offs, prequels and editions that boarding this train is perhaps a tad more complicated than it should be. 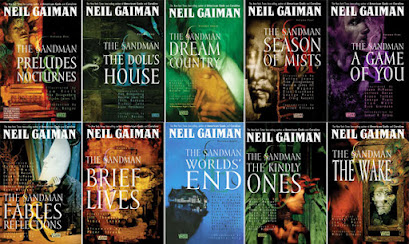 The Original Series
The Sandman was originally published as 76 monthly comic book issues (75 monthly issues and a special) between 1989 and 1996. These comics were collected into 10 graphic novels. This is the original or "core" Sandman series. The easiest way to start reading The Sandman is to simply read the original graphic novel series in order. This consists of:
Obviously ten graphic novels are a fairly expensive investment when bought independently (or in a slipcase edition), so there are other options.

DC recently reprinted the series as four large-format collected editions. These editions are not the prettiest (they are similar to Image's recent one-part binding of the entire first half of Saga: cheap but effective) but they are probably the best way of getting the whole story as cheaply as possible (you also have to be happy with the Netflix advert on the front cover):
The Absolute Sandman hardcover collection uses the same numbering as above but is very expensive, although likely to sustain many more readings. The Annotated Sandman also uses this system but is published in black-and-white and features extensive notes and annotations from Neil Gaiman. 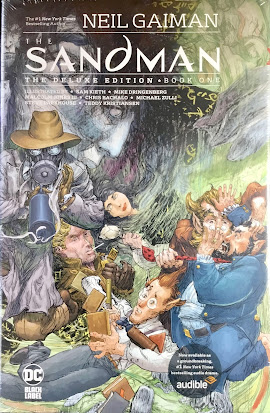 The Deluxe Sandman hardcover collection attempts to split the difference with nice hardcover editions but keeping the price down by collecting fewer issues, so there are more of them. These are effectively omnibuses with each book containing two of the original graphic novels. This collection has a bonus in that it also incorporates two of Gaiman's other Sandman series (see below) into the main series:
One flaw with this series is that the advert for the Audible version of the books on the cover is actually part of the cover, not a sticker, so cannot be removed. 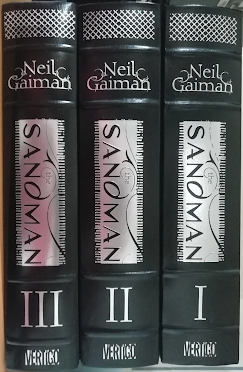 The Sandman Omnibus is astronomically expensive and also partially out-of-print but is also the most concise version of the series, breaking the whole thing, including the spin-offs, down into just three volumes:
This edition was available in a two-volume silver slipcase, a three-volume set and individually, but at the moment you can only afford to get most of these by selling at least three internal organs and your firstborn on the black market. 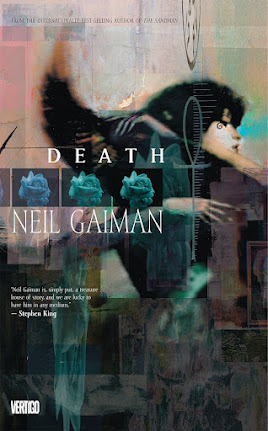 Gaiman's Sequels, Prequels & Expansions
The Sandman universe soon expanded into a wider universe of stories, books and collections. These are divided into works by Neil Gaiman and works by other hands. These are the works written by Gaiman expanding his original series. Below are the most common graphic novel collections:
The first two graphic novels spin off the character of Death from the main series into her own stories, whilst Endless Nights is an anthology telling seven stories, one about each of the Endless. The Dream Hunters is a self-contained, spin-off story about Dream and Overture is a prequel taking place immediately before the events of the main series. Endless Nights is sometimes counted as #11 of the main graphic novel series and Overture as #0, although they can be read fully independently of the main series.
These graphic novels are available independently apart from the two starring Death, which are now more usually found in one collection simply called Death (UK, USA), and Endless Nights and The Dream Hunters can also be found as part of The Essential Sandman: Book Five (as noted above) and all five as part of The Sandman Omnibus: Volume III (also see above). 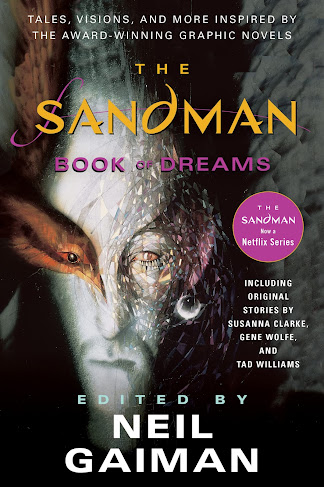 Series by Other Hands
Neil Gaiman has given his blessing for other writers to carry on with stories set in his world, both as mini-series and ongoing series. Some of these series are only loosely or nominally connected to the Sandman universe, whilst others have more definitive connections.
These are as follows:
Since 2018, DC has produced a family of titles under the banner heading The Sandman Universe, with writers specially chosen by Neil Gaiman:
There have also been additional graphic novels not published as individual comics:
There have also been two prose works set in the world of the Dreaming. The first, Sandman: Book of Dreams (1996) features short fiction by authors like Caitlin Kiernan, Tad Williams, Gene Wolfe, Susanna Clarke, Colin Greenland and an introduction by musician Tori Amos. The second, Dream Hunters (1999) by Gaiman himself, is a short, self-contained novel. Most of the graphic novel versions of Dream Hunters include the prose version.
Recommendation
Probably the best overall place to start with is The Deluxe Sandman collection of five hardcovers which covers the entire original comic series plus the most significant spin-offs, followed up by the Death one-volume collection and Overture.
If that's not possible (Deluxe seems to going in and out of availability fairly quickly, despite only being released a year ago), the 2022 four-volume edition is perfectly fine, followed up by Death, Endless Nights, The Dream Hunters and Overture.
Thank you for reading The Wertzone. To help me provide better content, please consider contributing to my Patreon page and other funding methods.
Posted by Adam Whitehead at 11:20

Email ThisBlogThis!Share to TwitterShare to FacebookShare to Pinterest
Labels: dc comics, neil gaiman, the sandman, where to start

Just a correction/addition: although the Absolute edition was originally just the four volumes, they later added a fifth, which includes Dream Hunters, Endless Nights, and the first issue of Midnight Theatre, plus some other stuff. There's also an Absolute Death, which includes not only the two big Death series but some other stories too, including some not included elsewhere in Sandman. And an Absolute Overture, containing Overture.

I guess they realised that if they wanted to market an 'absolute' edition it should probably have ALL of Sandman. Although it's frankly a bit inelegant in having, for instance, the same stories show up in the main sandman arc and the Death anthology, and in having an entire sixth volume just for Overture.

The other thing that should be mentioned for readers who aren't aware is that the Absolute edition also contains various curios and trinkets for fans - sketches, galleries of inspired art, some additional stories, merchandise listings, some prose works, information about the creation of the comic, etc. To be honest I don't think any of it is all that exciting for casual fans, but dedicated fans or completists might like it. [but then again, you pay all that money for the 'Absolute' edition with all these extras, and then you realise there's a whole other annotated edition out there... which is also not really 'complete' because they intentionally hamstrung it by making it B&W...]


So yeah, the edition issue is clearly a bit complicated, and just becoming more so over time. Maybe they need to make a new Absolute Really Everything This Time We Promise This Is It edition...?

@Wastrel: To be fair, Overture wasn't a thing until after the 5th volume of the Absolute Editions had come out, so the only option left was to collect it by itself.

I'm not sure the annotated editions are supposed to be "complete" either. They're not the books you buy to read the series, they're the books you buy after you've read the series (and going by the preview pages I've seen, only if you want to have all the references pointed out in often mind-numbing detail, although I'm sure a few interesting nuggets made it in too).

And a minor correction, it wasn't the "the first issue of Midnight Theatre", it was the only issue. Sandman Midnight Theatre was a one-off crossover between Gaiman's The Sandman and Matt Wagner (and co.)'s Sandman Mystery Theatre (which, for those who don't know, was a period noir series starring the golden age Sandman, who's unrelated to Gaiman's version).

Thanks both to Adam (natch!) and Wastrel, this is very helpful! :-)

There was also a Corinthian mini-series, written by Darko Macan.