Brothers: A Tale of Two Sons

A young boy, Naiee, is haunted by the drowning of his mother and his inability to save her. When his father is struck down by a serious illness, Naiee and his older brother Naia are told that the only thing that can save him is water from the Tree of Life. They must journey across the forbidding nearby mountains in search of the Tree, with only each other to rely on. 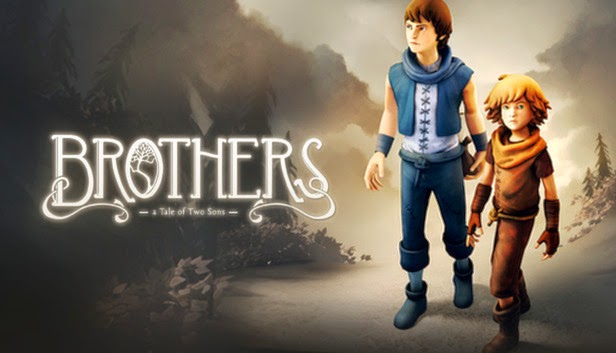 There has recently been a growing number of games that seek to challenge the traditional wisdom that video games must be confrontational and violent. Art games, for lack of a better term, have seemingly taken it turns to be incredibly violent but deconstructionist of that violence (as with Spec Ops: The Line) or by eschewing violence altogether in favour of the experience of a journey (as in, er, Journey). Brothers is one of these games, a title which places its emphasis firmly on cooperation and puzzle-solving. The only violence is in the past: at one point the horrific aftermath of a battle between giants is stumbled upon, with it being impossible to tell which slain behemoth was on what side.

Brothers is the story of two kids who set out on a quest to find the Tree of Life, which produces healing water they need to save their desperately sick father. The older child, Naia, is stronger and more intelligent, more capable of engaging in reasoned discussions with passers-by and giving his little brother a leg-up to hard-to-reach places. Naiee is more whimsical and stealthy, capable of slipping between bars to reach places his larger sibling can't reach. Naiee is also more trusted by animals and is artistically gifted, useful for winning over some of the suspicious folk they encounter.

The two brothers are, in the game's most-discussed distinguishing feature, controlled simultaneously from one device, whether that's an X-Box controller or a PC keyboard. You can play the game as a more traditional co-op title, if you don't mind sharing one controller between two people, but the game is designed to be a single-player co-op title which is both bemusing and refreshing. It works very well, with the developers sensibly restricting the controls to only movement and a single contextual 'action' button.

The puzzles are pretty straightforward - the only point I got stuck was due to a brief bug, not a puzzle design issue - and rely on common sense for the most part. There are a few times when the designers go to the same standby a few too many times (the 'alternating platform jumps' tactic gets really old before the game is halfway over), but for the most part they do a good job of keeping the puzzles fresh and not getting too stale. For such a short game (clocking in at around four hours or so), Brothers has a hugely varied world with the action moving from a medieval village to an elaborate underground cave system to a stunning mountain vista to a castle to an arctic wilderness. The graphics are stunning, with the game taking the time to show off some amazing vistas and level design. The music is also exceptional.

But the game's heart comes from the relationship between the two brothers. The dialogue is all in an imaginary fantasy language, so you only know what's going on via context, expressions or guesswork, but that makes it all the more remarkable that the game builds up such a strong emotional bond between the two characters and transmits that to the player. There are moments of humour, horror, drama and tragedy that are shared between the characters and in such ways that you are engrossed into the action. It may be a bit of a commentary on how cumbersome the controls for many games are when the simplicity of Brothers' allows you to even forget they exist and focus on the story and characters.

Brothers: A Tale of Two Sons (****½) is short but well-crafted game which challenges the ideas of how we control and play games and uses that to build a terrifically-realised relationship between the two characters. There are moments when the game falters, such as a few bugs, occasionally clipping graphics and an over-reliance on one particularly tedious jumping/climbing mechanic, but for the most part this is an inventive and clever game that rewards patience and exploring off the beaten track. Brothers is available now on PC, X-Box 360 and PlayStation 3.
Posted by Adam Whitehead at 19:38

Played through this on PS3 the other day. Very cool game, decent story. I recommend it.