HarperCollins has published the first of three infographics based on A Song of Ice and Fire. These were produced by some poor researcher (er, cough, me) going through the books and counting how many times people die/get married/get maimed/get tortured by Joffrey. I have no idea how many of the figures are going into the graphics (I came up with a couple of dozen), so any that aren't used I may post at a later date, if I'm allowed. 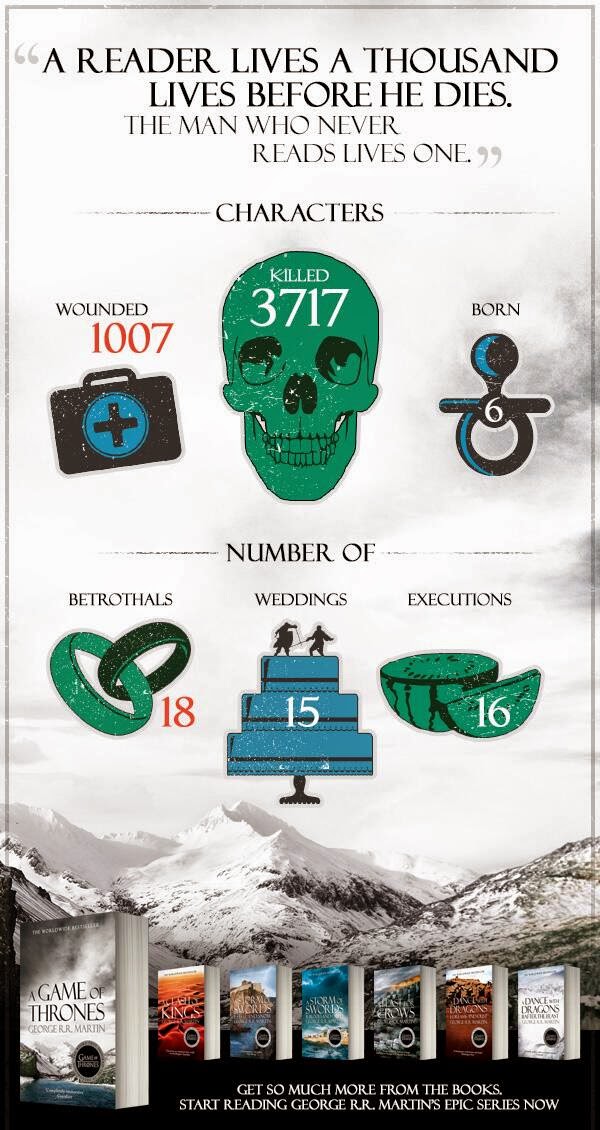 A note on methodology: I went through all five books (seven, in the UK editions) and made a note of every single time someone died, had sex, got married or was executed. I also tried to concoct an ultimate master-menu of every bit of food mentioned by GRRM in the novels, which caused my computer to crash and caused an Internet black-out covering much of the western half of Europe*. I also counted the number of times popular phrases (yes, even "Words are wind,") and unusual words ("Nuncle," natch) cropped up.

There was a lot of judgement calls in this. If GRRM describes someone getting smashed in the face by a mace and then ridden over by a horse into the mud, it's probably safe to assume he's dead. Someone with their hand cut off and is surrendering with the possibility of medical aid (if of uncertain quality; no Talisa in the books, remember) is a bit less certain and thus was not counted. The deaths include reported, accurate figures, such as the roll-call of how many knights and lords died on the Blackwater (the peasant soldiers were less lucky, obviously), and some prominent off-screen but reported deaths. Rumoured deaths which are not backed up by strong argument, and where strong theories suggest the person survived, were not counted. The death count also includes prominent animals (like certain direwolves) but not every dragon-roasted sheep or messenger raven shot down. The weddings count also includes off-screen weddings (Bronn and Lollys) and very minor ones (Tyrek and his toddler-bride).

I haven't seen these before, so I have no idea what's going to be on the next two.

* Possibly exaggerated for comic effect
Posted by Adam Whitehead at 20:59

How did you count the casualties of the battle for the Wall?

So that was you. And I blamed the innocent lightning storm.

You have WAY too much time on your hands!

(and that outage took out most of North America too.)

Congrats on all your hard work :)

I did something similar for Dune once, when I was young and had no life. It must have been a lot of work.

This was a paying gig and I was unemployed at the time, so time was not the issue :)

So, I tried counting the weddings from memory.. and came up with two more than you.

Also, how exactly did you define betrothals? Would you consider Daenerys/Drogo as one? And Petyr/Lysa? Beric/Allyria?

(I have too much time on my hands.)

I discounted Asha/Erik as Asha was not present (you can't marry seals in absentia!) and Ramsay/Arya-Jeyne's marriage I think has to be considered illegitimate on several grounds.

I'd have to double check the betrothal master list, but IIRC it was when a formal betrothal was made, not a shotgun wedding. I can't remember what I counted Lysa/Littlefinger as.

Wait, I thought the Wertzone blog was your job.

Well if you're not unemployed anymore, what is your job now? What did you major in?

I don't make any money from the blog as I don't allow advertising on it (hence the tipjar), so no, I don't live off that.

I currently work in for "one of the UK's biggest newspapers" dealing with subscriptions and finances. Although that should hopefully end soon when some more writing work comes in.

I wonder what the six births are. There's Tyrion Tanner, Mance's son, Gilly's son, Rhaego and the two shadow babies of Melisadnre. But I don't think you are counting the last three...