The next stage of human evolution has begun. All over the world, individuals are developing the powers of telepathy, telekinesis and teleportation. A secret government-funded agency, Ultra, is tasked with keeping these individuals under control or removing their powers altogether. However, a small group of 'Tomorrow People' has taken refuge under the streets of New York and is preparing for the day when they can escape persecution. 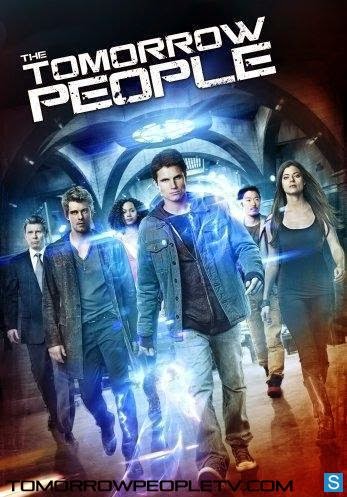 The Tomorrow People is an SF franchise with some history behind it. It originally aired from 1973 to 1979 as a zero-budget children's programme in the UK. Although almost forgotten today, it remains the second-longest-running British SF show of all time in terms of episode count (just beating out Red Dwarf). The series was then revived in 1992 for a three-season run. The premise of both shows was that humanity is developing into another form of life - homo superior* - and that the new 'break-outs' (humans who have developed these powers) need to be helped by the existing Tomorrow People to deal with their newfound abilities. Both shows also used more overtly SF elements like aliens and robots, with the Tomorrow People using an alien spacecraft as their headquarters and relying on a powerful AI named TIM to help them.

This latest reboot is from the American CW network and is surprisingly faithful to the original show. Character names are reused, original lead actor Nicholas Young has a cameo and even TIM (now a human-built computer) returns. However, the premise is complicated, darkened and made a bit less hokey. There are no aliens or spaceships and the struggle is now presented as being between the Tomorrow People and those humans aware of their existence and who see them as a threat, not a symbol of hope. There are also internal struggles within the Tomorrow People, between those who seek to use their powers for good, those who just want to get on with their lives and others who actively want to use their powers to commit crimes.

Our main POV character is Stephen Jameson (Robbie Amell), who breaks out in the first episode and finds himself torn between joining Ultra (run by his uncle Jedikiah, played by genre-favourite Mark Pellegrino) and a group of rebels led by John (Luke Mitchell) and Cara (Peyton List). Relations are complicated by John and Cara's group having been founded years earlier by Stephen's missing father Roger (Jeffrey Pierce). Early episodes play up a cheesy love triangle between Stephen, John and Cara and rely on break-out-of-the-week plots in which Stephen, having joined Ultra to spy on it for the rebels, has to maintain his cover whilst also helping his friends. Some episodes show promise - Cara's back-story is surprisingly well-handled, with List playing the younger, more rebellious version of the character with more aplomb than the somewhat dull modern equivalent - but it's pretty disposable stuff.

The show shifts up a gear in the mid-season, when more people find out about Stephen's powers and the real main antagonist, the Founder (played with scene-destroying relish by ex-Spartacus actor Simon Merrells) shows up to complicate things. The ongoing story arc comes more to the fore and for a few episodes the show almost lives up to its potential. Particularly welcome is Luke Mitchell stepping up to the plate and impressing more in the role of John. The showrunners seem to be aware of this, with a move in the mid-season away from focusing on Stephen as the protagonist (despite bringing enthusiasm to the role, Amell's range is rather limited) and instead on the group as a whole. This works well until the last couple of episodes when the plot starts lurching in all kinds of random directions and the conclusion to the season-long arc ends up being a bit of a damp squib. The cliffhanger pulls it back a little by providing some interesting groundwork for the next season, but given there isn't going to be one (the show was cancelled after filming concluded) that doesn't really help.

The Tomorrow People (***) is watchable, cheesy and disposable fun which occasionally delivers some above-average performances and episodes. There's certainly a lot of mileage in the premise and it's a shame that the show won't be given a chance to improve with time and more episodes. However, the show is also predictable, frequently badly-written and some of the actors should really think about taking up other careers: Jeffrey Piece is particularly awful, over-acting to the hilt and making even his cornier young co-stars look amazing in comparison. Overall, the series is only worth a watch once you have exhausted the several dozen better series around at the moment.

* Believe it or not, original series creator Roger Price was discussing TV projects with David Bowie in the early 1970s and found himself detailing the plot of the in-development Tomorrow People with the singer. Bowie liked the term so much that he nabbed it for his song "Oh! You Pretty Things!" (from Hunky Dory). The term was previously used in the X-Men comics in 1961, long predating either usage, but apparently neither Price nor Bowie were aware of this.
Posted by Adam Whitehead at 13:36

Email ThisBlogThis!Share to TwitterShare to FacebookShare to Pinterest
Labels: cw, the tomorrow people