Ian Cameron Esslemont, the co-creator of the Malazan universe with Steven Erikson, is enjoying his own level of success. According to his UK publishers, Transworld, he has passed one million books sold, and according to the Edelweiss Catalogue, he has three new Path to Ascendancy novels under contract. 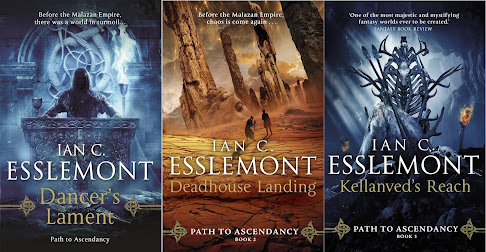 The sale sheets for the next three Path to Ascendancy books - following on from Dancer's Lament, Deadhouse Landing and Kellanved's Reach - are as follows:

This volume develops and details the Malazan expansion into the Falari Peninsula region. Kellanved and Dancer, impatient with the slow and methodical consolidation of the continent of Quon Tali, are up to no good and embroil the Malazan forces in an uprising against the ruling Theocracy of Falar.

These priests have maintained power over all the many islands through the threat of their terror-weapon: the dread 'Jhistal'...

Here readers will discover just what this weapon is, meet a younger Mallick Rel and find out just how the Malazans took the region into their grip.

Here we will be documenting and following the emerging Malazan Empire's first landings and foothold in the region of the Seven Cities. Central to this account will be the monumental and notorious attack on the Holy City of Aren.

The emergence of Dassem Ultor, his rising influence and popularity among the military of the empire - together with Surly's growing wariness of it - is all suggestive of his death before the walls of Y'ghatan.

Another path of this story will follow Kellanved and Dancer's exploration of Shadow and beyond, and further steps towards the former's ascension as Shadowthrone.

Kellanved and Dancer and company have become ever more powerful and elevated, and are now distant players as we dig down to follow Bridgeburners themselves: Whiskeyjack, Fiddler, Hedge, Trotts, Mallet and others. Yes, the gang's all here and readers will relish being in their company once more!

Battles and encounters in Mott Woods and Black Dog Forest abound and all of this leads readers up to to the point at which this extraordinary multi-faceted, multi-layered epic fantasy saga first began: Gardens of the Moon.

In addition to the Path to Ascendancy books, Esslemont is also the author of the six-volume Malazan Empire sequence: Night of Knives, Return of the Crimson Guard, Stonewielder, Orb Sceptre Throne, Blood and Bone and Assail. He is the co-creator of the universe explored by his friend Steven Erikson in his ten-volume Malazan Book of the Fallen sequence, the Tales of Bauchelain and Korbal Broach novella sequence, The Kharkanas Trilogy and The Witness Trilogy. Steven Erikson has sold over 3.5 million books since his first fantasy novel, Gardens of the Moon, was published in 1999.

Thanks to Jussi at the Westeros.org forum for spotting these figures in the wild.

Email ThisBlogThis!Share to TwitterShare to FacebookShare to Pinterest
Labels: ian cameron esslemont, path to ascendancy, steven erikson, the malazan book of the fallen

Nice to see ICE has hit the 1 million sales mark, a great achievement.

Overall the outlined books sound good, but I am a little apprehensive about book 6. Often I find prequels quite boring, especially when they are going over famous or often talked about events. Things often end up being very predictable or rather underwhelming. Obviously this sounds an odd concern considering the topics of the other books in this series, but the joy of focusing on Kellanved & Dancer is that you always knew that the official history was highly unreliable, so there was plenty of opportunity for new information or unexpected occurrences. I’m not sur you will get that with the Bridgeburners.

I really do enjoy the Path to Ascendancy books, and had hoped they would be extended, so great news.

Struggling with the new Steven Erikson book though. I really do find it hard to get going with his books.

So far worked through Eisenhorn, Ravenor trilogies and Joe Abercombie and still to move beyond page 60 of Eriksons new work.