In shocking news, actor Michael K. Williams has passed away at the far too-young age of 54. The actor was found at his home earlier today. No cause of death has yet been ascertained. 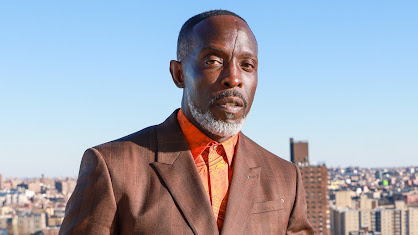 Born in 1966 in New York City, Michael Kenneth Williams trained as a dancer and went on tour with artists such as Madonna and George Michael. His acting skill was recognised by no less than Tupac Shakur and he was cast in the 1996 film Bullet, which marked the start of his acting career. Williams found his casting somewhat stereotyped due to the recognisable scar he had on his forehead, the result of a barfight in his twenties. As a result he was often cast as villains or "heavies."
In 2002 Williams auditioned for a new HBO TV series called The Wire. He impressed showrunner David Simon with a single audition and was cast in the role of Omar Little, a Robin Hood-like figure who robs criminals and drug dealers and distributes money to his community. The role was loosely based on real Baltimore "stick up" figures such as Donnie Andrews. Omar was a "third side" in the show, someone who sometimes worked alongside the cops but sometimes pursued his own agenda that was at odds with them.
The character became a cult favourite in the first season, but exploded in profile in the second after a courtroom scene where Omar justifies his morality whilst serving as the witness in a criminal case. The character was applauded for both being a hardman with a moral code and also a gay man in a notoriously homophobic environment. Williams was nominated twice for an NAACP Image Award for his portrayal of Omar, and in 2008 a pre-election Barack Obama noted that Omar was his favourite character on the show, though not one whose every action he'd approve of. Williams continued to portray the character until the end of the final season in 2008.
The Wire gave Williams tremendous opportunities and he went on to appear in films such as Gone Baby Gone, Life During Wartime and a brief but high-profile appearance in The Road. He had another big role in 12 Years a Slave, and solid supporting turns in Assassin's Creed, Ghostbusters (2016) and The Gambler.
However, Williams became a much sought-after television actor. He had recurring roles on Alias and Six Degrees and a hilarious recurring role as Dr. Kane on Community, among a vast number of guest star roles. It was HBO where he continued to make his home, though, appearing as Chalky White in Boardwalk Empire, Freddy Knight in The Night Of and Montrose Freeman in Lovecraft Country. Each one of these performances attracted critical acclaim and award nominations. From 2016 to 2018 he starred in the well-received Hap and Leonard alongside James Purefoy.
Williams recently completed work on several films, including 892 alongside James Boyega and Surrounded with Letitia Wright, which will now be posthumous releases. Williams is survived by one son.
An actor of impressive range, intensity and charisma, Michael K. Williams will be missed.
Posted by Adam Whitehead at 22:36

Oh, man. My favorite Omar scene is when he couldn't put his gun in his pajamas' waistband, so he just left it at home. He brought humanity to a character that could have easily been an over-the-top caricature.
Other than that, I have only seen him in clips of Community, but I'm really glad to read that he found success.

Mate, absolutely gutted. Amazing talent he was. I know he struggled throughout his life with addiction, but this is just fucking sad.

Mate, absolutely gutted. Amazing talent he was. I know he struggled throughout his life with addiction, but this is just fucking sad.