BABYLON 5 reboot in development with J. Michael Straczynski in charge

It's been rumoured and discussed many times over the years, but something is now officially happening: a Babylon 5 reboot is in the planning stages with original creator and writer J. Michael Straczynski attached. 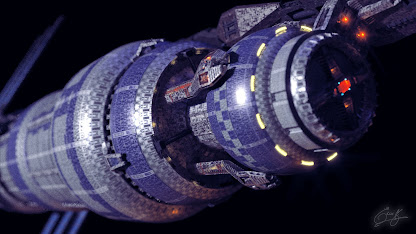 The new project is being helmed by the CW, although reportedly the show will retain a similar sensibility to the original and will not skew younger, as a lot of their content does. The show will open with Earthforce officer John Sheridan being assigned to Babylon 5, a massive space station serving as a diplomatic exchange and trade hub. Simultaneously with his arrival, an exploratory Earth mission inadvertently triggers a conflict with a more advanced alien civilisation, threatening humanity and several other races.
So far, this is only a development announcement and the show has not yet been greenlit to series or a pilot stage. It is unclear if any of Babylon 5's other creative forces are involved, such as fellow executive producer John Copeland, composer Christopher Franke or the visual effects team, or if any of the actors from the original series such as Bruce Boxleitner, Claudia Christian, Patricia Tallman, Peter Jurasik or Bill Mumy may return in new roles.
A reboot was considered the more likely form for the show to take, due to the deaths of so many original series actors (including Michael O'Hare, Jerry Doyle, Richard Biggs, Mira Furlan, Andreas Katsulas and Stephen Furst) making a sequel series unlikely. The original show is also considered a cult success without the familiarity of, say, a Star Trek or Star Wars, making a reboot of the original story more viable.
The original incarnation of Babylon 5 debuted in 1993 with a TV movie called The Gathering. Five seasons followed, totalling 110 episodes (with Straczynski writing 93 episodes in total), along with four TV movies and a spin-off series, Crusade, which ran for one season. Straczynski later penned a potential pilot for a second spin-off, Legends of the Rangers, and a straight-to-DVD movie in 2007 called Babylon 5: The Lost Tales. Warner Brothers expressed an interest in developing more content, but Straczynski bailed out of the project due to a lack of budget and interest in developing a spin-off feature film he'd penned. The franchise also extended to tabletop roleplaying games, miniatures wargames and a line of novels.
Babylon 5 won two Hugo Awards during its time on air and attracted immense acclaim for its heavily serialised, pre-planned story arc at a time when most TV shows were still episodic. Babylon 5's structure and storytelling ambitions inspired other writers, including Damon Lindelof, Joss Whedon and the Wachowskis, whilst Ronald D. Moore consulted with Straczynski during the development of his take on Battlestar Galactica. Babylon 5's epic story and meticulous worldbuilding drew on sources such as J.R.R. Tolkien, Frank Herbert, Ray Bradbury and British SFF shows Blake's 7, The Prisoner and Doctor Who for inspiration, as well as the original Star Trek (Straczynski tapped a number of writers from the original Star Trek to work on the show in its first season). The show also won numerous awards for its cutting-edge (for the time) digital effects, which paved the way for CGI dominate the TV visual effects industry.
Warner Brothers recently released a high definition remaster of the original series on streaming services worldwide. Although the live action footage looks vastly superior, the CGI is variably upscaled.
Straczynski's star has risen since Babylon 5, with him penning multiple successful comic books, developing the story for the 2011 Thor movie (as well as cameoing in the film), being nominated for an Oscar for his script for the 2008 movie Changeling and co-writing the Netflix series Sense8 with the Wachowskis. Straczynski recently released a well-received autobiography, Becoming Superman, and a new novel called Together We Will Go. He also recently completed the editing of his friend Harlan Ellison's fifty-year-gestating short story anthology The Last Dangerous Visions, which is expected for publication next year.
This is a promising development, although fans will likely be concerned that the CW is developing the property rather than HBO or HBO Max, which could perhaps give the series the resources and exposure it deserves. It will be interesting to see how this develops.
Posted by Adam Whitehead at 20:06

Well, this is unexpected...

Apparently in a post on Facebook, Claudia Christian said that JMS has kept the old cast in the loop on this and plans to have them involved in some way.

Also, there were rumours (and actually a pre-order listing on some Nordic retailer's site) of a Blu-ray release of the remaster. I wonder if this was pulled from the schedule to possible tie the release in with the reboot?

And a slight correction: while the film got several Oscar nominations, JMS wasn't nominated for Changeling. He did get a BAFTA nomination, though.

Curious. Just to nitpick, if Sheridan is at B5 for the opening then Sinclair may be written out, which would be ok, but then what about Valen?

Having B5 exist at the opening sort of removes its purpose of preventing another war, and raises questions why Earth built a huge space station.

I suppose if you wanted to rewrite you could have Sheridan be on B4, which is destroyed by the Mimbari, which removes the need for a time travel plot and the awkwardness of B4 somehow being lifesaving for the Mimbari and Vorlon coalition. Then you get a war weary Sheridan at a new B5, which would dispense with the mostly awful season 1.

Sinclair = Valen was not in JMS's original plan, and only developed from a combination of 1) Michael O'Hare's illness and 2) DC Fontana's script for "Legacies" and the line "you talk like a Minbari, Commander." That made JMS realise that he could park Sinclair on the benches whilst O'Hare sought help and then bring him back later on and invoke time travel to become Valen.

My guess is that in a reboot, he'd either 1) simply follow the original storyline where Valen is just a prophetic figure in the past or 2) Sheridan goes back in time and becomes Valen, but only at the very end of the series.

This really speaks to the fuzzy nature of truth and memory. I have read different versions of the original plan in JMS' bio and online and it is so much at variance with what was actually produced. And with what JMS would think of as a good plot now over two decades later. If I had to choose I think I would go with axing the Sinclair story line. But knowing what it cost Michael O'Hare personally I hate to see him written out. And the whole Mimbari souls being reborn in human bodies is nonsense if it not grounded in something. It doesn't have to be bookended by Sinclair turning into a Mimbari and Delenn turning into a human, but something has to make that plot thread believable.