There has been a murder in Ankh-Morpork, which at first glance is not unusual. But the nature of the murder intrigues Commander Sam Vimes and Captain Carrot of the City Watch. Their investigation of the case, aided by new forensics expert Cheery Longbottom, exposes an ambition that could plunge the whole city into chaos. Once again, Sam Vimes and his officers are the thin blue line between order and chaos in a city where it's hard to see where the one ends and the other begins at the best of times. 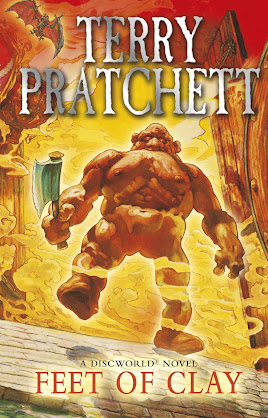 Feet of Clay is the nineteenth Discworld novel and the third to focus on the Ankh-Morpork City Watch, following the excellent Guards! Guards! and Men at Arms. Once again, the City Watch must rally to solve crimes and stop a threat to the safety of the city, through a combination of Commander Vimes's cynicism, Carrot's good-natured optimism, Colon's stoic experience, Detritus's massively impractical siege weaponry, Angua's nasal intuition and, er, whatever it is Corporal Nobbs does. The Watch is here reinforced by new arrival Cheery Longbottom, a dwarf forensics expert with something approaching a secret.

You might expect the novel to be predictable - the City Watch sub-series is, at least in potential, Pratchett's most procedural sequence of books - but as usual Pratchett takes some delight in wrong-footing expectations. This is still a funny book, as Colon's close encounter with a psychotic lunatic of diminutive size and then a very angry bull can attest, but there's more of a serious side to it as well. Existential debates on the rights of sentient beings when no one can agree if they're sentient form a key part of the story as well, as Pratchett introduces the Discworld's golems, here used almost as robot slave labour until it turns out that they can think and feel, after a fashion, which raises thorny ethical questions.

The book is also marvellously, intricately constructed. Some other Discworld books feel like Pratchett has aimed an Idea Cannon at a wall, blasted out whatever came to mind and then assembled the resulting narrative morass into something resembling a coherent plot. That worked extremely well for some novels and not as well in others, but Feet of Clay definitely feels more pre-planned and structured. There are more distinct character arcs, not just for Vimes but for Carrot and Angua's relationship, new recruit Cheery whose quiet confidence over gender expression rapidly sparks a cultural revolution among the city's dwarfs, and even for series stalwarts and standbys Nobby and Colon. The former gets drawn into what feels like a Game of Thrones subplot, whilst Colon - distressingly several weeks from retirement - has a solo mini-adventure that he was not expecting.

There's even foreshadowing at work here, as Vimes visits his childhood neighbourhood and we get the feeling of unspoken secrets about his background. These will, eventually, give rise to one of Pratchett's great masterpieces in Night Watch, but that's still quite a few books off.

Feet of Clay (*****) is one of the best Discworld novels, if not quite at the absolute-best tier of Small Gods and Night Watch. It's well-constructed, naturally funny whilst supporting more serious ideas, and as marvellously characterised as Pratchett at his best. It deepens the worldbuilding of Ankh-Morpork, the Greatest Fantasy City of All Time™, and sets the stage for intriguing developments to come. The novel is Pratchett at his best: erudite, thoughtful and smart, creating a work where fantasy, satire and detective elements meet perfectly. The book is available in the UK and USA.

Feet of Clay just sits comfortably in the middle of the Discworld golden age - starting with Small Gods, ending with Night Watch.