Between 1989 and 1999, British SF novelist and critic David Wingrove published eight volumes in his critically-acclaimed Chung Kuo series. Set two centuries in the future, the series depicted the planet dominated by vast continent-spanning cities consisting of hundreds of levels. Earth and its colonies were controlled by the Chinese, whose government had established hegemony over all of the human race and erased vast chunks of history in favour of their own propaganda. As the series unfolded, it depicted cracks appearing in this monolithic empire and the descent into all-out war. 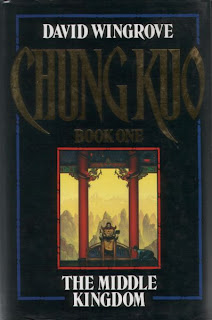 Originally envisaged as a nine-volume series, Wingrove ran into problems in the writing of the eighth book, The Marriage of the Living Dark, such as not being paid properly for it and being told by the publishers they were not interested in a ninth book, as sales of the series were going down. Wingrove had to collapse the story intended to spread across two volumes into one. The final volume was in print only briefly, is now difficult to find and has been harshly criticised ever since the original release, a perspective Wingrove has agreed on.

Word began to spread a couple of years back that there might be some movement on the series, and Wingrove had reportedly been working on new material set in the Chung Kuo universe. It now appears, that after several false starts, the series will indeed be relaunched in a big way by the small publisher Corvus-Atlantic (mentioned on the very last page), starting at the end of 2010.

The first seven books have been broken into two volumes apiece (the very large existing books apparently not being economical for the smaller publisher to release), whilst the disappointing Marriage of the Living Dark has had 300,000 words added to it (effectively doubling its size) and then been broken into four smaller volumes. There will also be a new final novel (title unknown), transforming the core Chung Kuo series into a massive nineteen-volume saga. In addition, a new prequel novel, Son of Heaven, has been written to kick off the series and Wingrove is now working on a new, stand-alone novel set in the same universe, Dawn in the Stone City.

The existing volumes of the series are:
Interesting to see if this comes off. The series was a mainstay at the local library, but for some reason they never had Book 1 and I was never motivated enough to try to find it. If the series does get relaunched, I'll have to check it out.
Posted by Adam Whitehead at 01:59

I tried Chung Kuo 1 several times and I never got into it - the length makes it prohibitive time-wise unless it really hooks me; I may give another try if/when the opening new volume comes out.

Great news! I love Chung Kuo and it is great to have it republished. I've never been able to read the book 8 (it's costing a terrible money on Alibris, Abebooks etc.), so I extremaly happy that David is going to prepare the ending to the series according to his earlier plans.

Are these books worth the read? What series would you consider as comparable in quality?

As I say in the article, I have never read them. However, they were recently the subject of some discussion on SFFWorld and during the course of that discussion this news came to light. Since I know a few people who wanted to know about the series, since Wingrove is a noted SF figure (for his work in criticism, most notably on BILLION YEAR SPREE) and since it's news, I decided to let people know about it.

Minor quibble, Adam: you don't actually say that you've not read it. You say that Book 1 was never tracked down.

How good is this series? In my view comparable to Dune.

To sum up the series, it is fantastic - up there with anything in sci-fi. On the cover of the books I own the series was labelled as 'imagine a combination of Frank Herbert and James Clavell' or words to that effect. As one of the best sci-fi (Herbert) and adventure writers (Clavell) well...ever that shows how good the books were.

They aren't perfect - the later books perhaps lost their way a bit and the ending wasn't satisfactory - but that was apparently due to his publisher screwing Wingrove over and having to rush the book out and cut down in half.

I found them by accident, never having seen the books advertised or anything but I was hooked.

Can't wait for the re-writes...

The plot is brilliant, characters engaging and writing superb. If people criticise as being overly long or too complicated then they should go back to reading mr men books basically. If you want something to get your teeth into then get reading them!