Tome of the Undergates by Sam Sykes

Lenk is a man who commands a company of adventurers. Well, 'commands' is perhaps the wrong word. His company consists of Gariath, a dragonman who has vowed to die in glorious battle and regards human as vermin; Katiara, a shictish archer who regards human as vermin; Denaos, a thief who regards himself as vermin and is quite happy about it; Dreadaeleon, a mage with an impressive ego; and Asper, a priestess and healer with confidence issues. They spend all of their time insulting and threatening to kill one another. 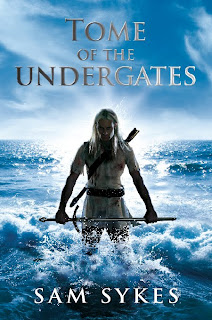 Lenk's team-management skills are put to their test when his band is hired to escort an important churchman on a long ocean voyager. Attacks by pirates and strange sea creatures lead to the revelation that their mission could determine the fate of the world, and when a powerful magical artefact is stolen and taken to a remote island, Lenk's team reluctantly (less reluctantly when the fee is mentioned) sets out to recover it.

Tome of the Undergates (not Tomb of the Undergarments as I initially misread the title) is the debut novel by American author Sam Sykes, and is one of Gollancz's big fantasy debuts for 2010. Having hit big previously with Scott Lynch and Joe Abercrombie, Gollancz have great form for their debut fantasy authors and if their more recent debuts (Stephen Deas and Robert Redick) have not been quite in the same league, they have remained highly readable and enjoyable.

Unfortunately, I don't think Tome will be generating the hoped-for reception either. This is a troubled novel with a number of big problems that made getting through it quite difficult. That said, it also has some excellent points that ultimately made the journey worthwhile.

The first problem is that whilst the individual characterisation is fine - these are memorable and vivid characters - their interrelationships are mind-bogglingly tedious. These guys hate one another. I don't mean in the "Not liking one another to start with but learning to get along and ultimately respecting each other," way of say Belgarion's companions in The Belgariad or Legolas and Gimli in Lord of the Rings, I mean that they want to kill one another and threaten to do so one every fricking page, at least through the first half or so of the book. Why these characters haven't all killed one another by the halfway point of the book is a total mystery, and the revelation that this band has been hanging out and working together for a year is totally implausible, especially since two of them are non-human creatures who hold that humans are all vermin and all of them deserve to die in agony. They threaten one another with physical violence and death on every single page they appear for over 300 pages (this is not even remotely an exaggeration), even whilst in mid-battle fending off hordes of enemies. It's quite funny, yes, but only because it's so silly. It reminded me of being a DM trying heard the campaign along whilst all the players want to do is sit around and make insinuations about one another's sexuality and their relationships with their mothers. It's funny for a bit but the joke wears thin after the first ten minutes or so.

Another major problem is the book's pacing, which is problematic. The book opens with a sequence at sea where there is a big fight and our 'heroes' learn about the plot from the Expositionary High Priest and are given their mission to go and retrieve the missing magical item. This sequence, mostly consisting of a shipboard battle, takes up a mind-boggling two hundred pages. I am honestly impressed at this, as not even R.A. Salvatore or Steven Erikson can keep up one single battle sequence going for two hundred pages, especially one where all of the 'good guys' spend every page threatening to kill one another in graphic detail whilst fending off the enemy hordes. The amount of carnage is genuinely impressive, but it has to be said gets rather old quite quickly.

Once this sequences is concluded, the book picks up. Things move somewhat more quickly as our team of protagonists have to explore an island and then a large temple for signs of the bad guys, and there is an impressive left-field curveball about three quarters of the way through the book when a hitherto unknown faction reveals itself. The characters start to gel and work together better, and drop off from threatening to kill one another every page to merely once every three or four pages. There's some much more impressive combat sequences (thankfully merely in a single-figure count of pages) and the backstory and worldbuilding elements start being built upon in a more intriguing manner. There's also some bigger character revelations in the second half that makes the protagonists more layered and interesting.

The book ends with more of a pause than a cliffhanger, and by this point I was rather surprised to learn that I was reluctant to see the back of our band of mentally unstable psychopaths with the story still incomplete, so it's fair to say that the book eventually overcomes it's huge character and pacing issues with aplomb and ends up being skirting against being compelling.

Although I am still trying to work out what Geralt, Andrzej Sapkowski's Witcher of Rivia, is doing taking a doggy-paddle on the front cover.

Tome of the Undergates (***) is, eventually, an interesting story with a lot of mysterious elements that leave the reader wanting some answers. Getting to that point is an exercise in pure frustration, however, and less patient readers may not last the course. The book will be published on 15 April 2010 in the UK in hardcover and tradeback.
Posted by Adam Whitehead at 01:38

Email ThisBlogThis!Share to TwitterShare to FacebookShare to Pinterest
Labels: sam sykes, tome of the undergates

Nice review. Having not read a "traditional" fantasy novel for a while, I might actually pick this up. Also, I first read the title as "Tome of the Undergraduates," which is actually kinda logical, but clearly false.

I've been curious to see how other people react to this one - it does creep up on you at the end, doesn't it.

http://www.dailymotion.com/video/xcwros_interview-with-fantasy-author-sam-s_creation its now a film

You know, it's funny you say that it reminds you of being a DM. As I read your opening paragraph of description about the book I though, "this sounds like a D&D party."

For me you were too generous with the stars - I found this unreadably bad and following in my wife's footsteps gave up after 30 pages or so. £15 wasted!